A “global network of Islamists” 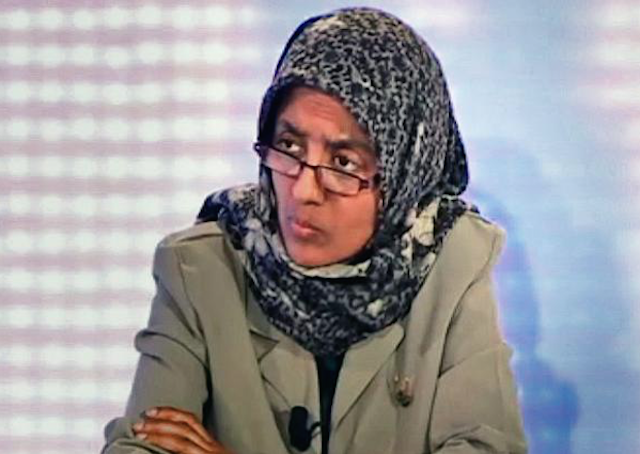 A report from the London Times has revealed that a senior employee of Amnesty International failed to disclose ties to Hamas, the Muslim Brotherhood, and the greater global Islamist network.

Yasmin Hussein, 51, was until recently head of Amnesty’s international advocacy division, and played an active role in the charity’s advocacy at the United Nations. An investigation into Hussein’s connections uncovered ties to “a secretive network of global Islamists” both through her husband, who was investigated for working closely with the Muslim Brotherhood, and via her activities with a UK-based aid agency that was banned from Israel for their alleged support of Hamas terrorism.

More from the Times of London (hat tip to UN Watch):

Ms Hussein, who is understood to receive a salary of more than £90,000, told The Times that she had “never had any association whatsoever with . . . the Muslim Brotherhood”.

Her husband, Wael Musabbeh, was one of several alleged British Islamists, none of them defendants, named in documents released after a 2013 trial in the UAE that led to the jailing of more than 60 Emirati citizens who were tried for conspiracy and sedition.

Mr Musabbeh, 54, and a Bradford community trust of which both he and Ms Hussein were directors, were said by the authorities to be part of a complex financial and ideological network in which the UK and Ireland served as important hubs, linking the Brotherhood to its group in UAE.

Amnesty, which challenged the fairness of the trial, said it knew in 2013 of documents alleging links between the defendants and British individuals and organisations, including Mr Musabbeh and the Bradford trust, but did not realise there was any connection to Ms Hussein, to whom he has been married for 20 years, because it did not know until recently that he was her husband.

Mr Musabbeh said he had no connection to the Brotherhood, was not an Islamist and was unaware of having played any role in the UAE case.

The Times report also raises a red flag about a 2012 meeting between Hussein and Muslim Brotherhood advisor Adly al-Qazzaz; Hussein traveled to Egypt for a private meeting with al-Qazzaz, and stayed the night at his family home. Al-Qazzaz’s ties to the Brotherhood ran deeper than his own position with the movement; his son was the organization’s presidential secretary for foreign affairs, and his daughter was the official spokesperson for the movement in the UK. Amnesty International investigated the incident, and found no other wrongdoing on Hussein’s part save for her overnight trip to Egypt.

Amnesty International claims an absolute lack of bias in their work at the United Nations and abroad (their website claims that they are “independent of any political ideology, economic interest or religion,”) but the charity has a long history of ignoring the crimes of (and thus promoting the interests of) Islamist bodies and governments.

..@AmnestyOnline says this Hamas commander is a civilian. And that MY research isn't credible https://t.co/hNSH1WRywa http://t.co/Vgw3UM5did

.@amnesty says this person is a "child." But they claim that MY research isn't credible http://t.co/Vgw3UM5did pic.twitter.com/zQhOKLqMPz

Earlier this year, Amnesty came under fire after the charity released an interactive online tool mapping Israeli attacks in Gaza. As The Tower reported at the beginning of July, the specific purpose of the tool was not to “raise awareness” about the conflict in Israel, but to accuse Israel itself of war crimes.

Considering Amnesty once propped up the mastermind who thought up the Muammar Qaddafi Human Rights Prize, none of this is particularly shocking. In fact, when you really think about it, it makes sense.

Will anything come of this? Probably not; Amnesty has tripped over itself for years in its attempts to turn a blind eye to the worst criminals and human rights violators on the planet. They’ll continue to do so—but that doesn’t mean that the world shouldn’t know who these people are, and what they do.

Hussein may not be party to a grand conspiracy. We may never know the extent of her apparent ties to terrorism; but what we do know is that she somehow managed to work for a human rights-based charity while at the same time maintaining ties to people and organizations that have a terrible track record when it comes to protecting the life and dignity of the human race.

We live in an insane world, but no amount of insanity can make those ties make sense.

Am-nasty never had a chance. They were born to be pwned.

We NEED to get the UN out of the US, and visa versa.

There is a word in the Koran that describes the requirement that all Islamist LIE, to hide their ideology, like beheading, genital mutilation, honor killings, to protect their cult.

Taqiyya is the word you were looking for.

(Why are Americans so gullible/stupid/foolish?)

Meanwhile no leftist in the US wonders what Huma is doing with the info she learns about our government from Mrs Clinton and others.

This makes sense. Similar things are probably true for other human rights organizations as well.

Amnesty used to be a genuine force for good in the world, but they lost their way some time in the ’90s, and finally jumped the shark for good when they tried to get survivors of Soviet persecution to compare Guantanamo to the Gulag.

I remember growing up and there were signs around saying the U.S should get out of the UN. This was back in the 60’s.
Politicians should have listened back then and acted on it….Oh wait, the dems were the majority back then. Surprise, surprise, surprise.

Wiki:
March 30 – June 10, 1964: The longest filibuster in the history of the Senate was waged against the Civil Rights Act of 1964, with 57 days of debate over a 73-day period. It ended when the Senate voted 71–29 to invoke cloture, with the filibuster carried out by southern members of the Democratic Party, the first successful cloture motion on a civil rights bill.