The more you feed it, the more it grows. 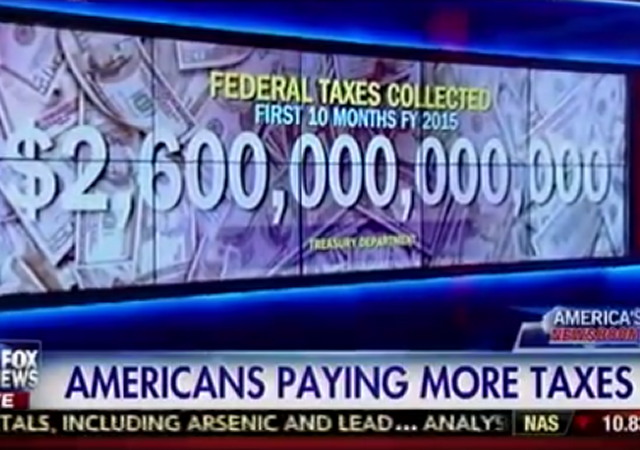 Since the beginning of fiscal year 2015, the federal government has taken in a staggering $2.6 trillion in tax revenue. Despite this record breaking haul, the United States is still operating in the red.

The federal government raked in a record of approximately $2,672,414,000,000 in tax revenues through the first ten months of fiscal 2015 (Oct. 1, 2014 through the end of July), according to the Monthly Treasury Statement released today.

That equaled approximately $17,955 for every person in the country who had either a full-time or part-time job in July.

One other record was set in the first quarter of 2015 and it might just be related.

In May, Robert McGarvey of Main Street reported:

Say Goodbye, America: The Rich Are Renouncing Their Citizenship to Dodge Taxes

In the first quarter of 2015 the highest number of Americans – ever – renounced their citizenship. The number, 1,335, is a relatively small proportion of the population at large, but the U.S. now appears to be on track to log more citizenship renunciations in 2015 than in any prior year.

Year-on-year the total keeps growing. In 2013, 2,999 renounced their citizenship, an increase of 221% from 2012. In 2014, 3,415 renounced their citizenship, the highest total ever. But 2015 appears to be on track to see 5,000 say goodbye to the U.S., said David Hryck, a partner at Reed Smith in New York and a tax lawyer with a clientele studded with one-percenters. He added: “I have so many clients asking me about doing this now.”

Big government is a magnet for fraud and waste.

When government ignores oversight and laws, all that fraud and waste multiplies exponentially.

Last time we had Nasdaq 5000 was back in the Clinton era. We finally recovered to those bubble levels, but only with another easy money bubble.

I wonder how much of that record revenue this year, is from capital gains in the markets. The Bush era had people writing off losses in stocks and homes, but seven years later ZIRP and QE have us in another bubble, with another Democrat soaking up all those capital gains and other taxes on paper wealth. The economy struggles, and wealth concentrates around DC, plus to entitled government union workers nationally.

Obama came in with stocks and many stats at record lows, and extraordinary interventions like TARP and the trillions in QE “saved the day” with paper lies. Grandmas get zero interest on their safe CDs. Leveraging money into stock and bond bubbles does not make a real economy … we have to produce real stuff.

The global currencies are becoming worth less as everyone inflates, but that hidden confiscation of real wealth has not shown it’s rotten downside yet. China, Greece and Illinois are giving us a whiff, but the stink will get worse.

He’s not only pumped the equities bubble back up, but he’s also working hard to create another housing bubble, and he already has created a student debt bubble.

Nobody bothered to ask what he meant by “fundamental transformation.” We’ll all find out the hard way before he’s done.

The gov is way too big and spends too much. Politicians are irresponsible with the hard earned money which is confiscated from the public each week. They will do nothing while everything slides towards an economic collapse.

Fiat currency, fiat culture-there are huge deficits weighing this country down, like a millstone hung around our necks.

A Keynesian economics swami like Paul Krugman wants you to spend money (don’t save whatever you do thus revealing the FED’s low interest rate deceit) to better the consumer-based economy (and supposedly, up the GDP in tandem). This make Krugman, a Noble Prize winner à la Obama ‘participate’ style and others like him look credible and ‘worthy’ of simpleton sycophants.

People would spend more if Keynesians shut their traps and the FED stopped its low interest rate gnosis high volatility hunger games and let the now barely free market speak on its own terms.

If the Feds stopped its low rates, the deficit would really climb. Too much of it has not been rolled over into long term bonds.

I agree. If the FED raised interest rates the country’s debt would soar. That would not be politically expedient until something changes on the front end.

Obamaism has infected all entities of government. We need to elect someone who knows where the virus is hiding. I believe that a Walker-Fiorina ticket would scour the halls of autocracy and disinfect our government.

Why more people are not just sick of this immoral debt is just beyond me. Is our society so stupid as to think there will be no reckoning of this error? What part of “We are BROKE” do they NOT understand?