Prosecutors: Brendan Tevlin’s murder was an act of terror

Prosecutors: Brendan Tevlin’s murder was an act of terror 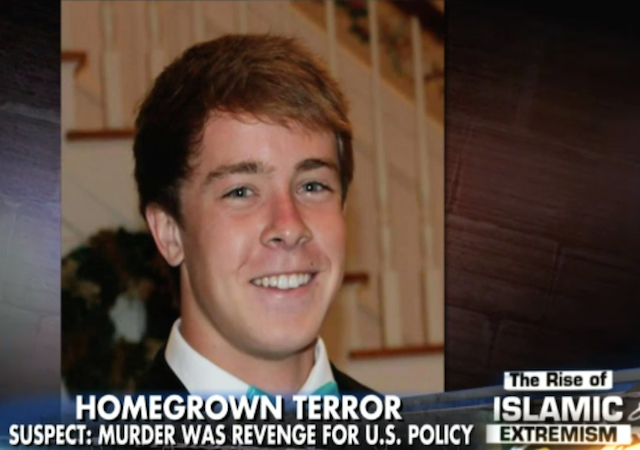 In June of last year, Ali Mohammad Brown shot 19 year-old Brendan Tevlin 10 times while Brendan was stopped at a traffic light in Essex County, New Jersey. The murder itself was underreported, and media watchdogs and activists took to social media to demand an explanation for the lack of coverage of such a violent, inexplicable crime. (You can read Legal Insurrection’s coverage HERE.)

They were right to do so.

After Brown was caught and arrested, he told police that the murder was a “just kill” and said it was an act of “vengeance” to compensate for U.S. military killings in the Middle East. He was vocal in his opposition to American intervention overseas, emphasized multiple times the vengeful nature of the act—and yet the media did nothing to expose what could have been the next act of violent jihad come to America.

The media’s malpractice in this case has been well documented, yet outlets for the most part have only just begun to scratch the surface of what happened. True justice for Brendan, however, is in reach. Last Thursday, Brown was indicted on charges of terrorism, murder, felony murder, carjacking, and robbery, as well as multiple weapons offenses.

Brown has a long history of extremely violent crime—specifically, murder. From NJ.com:

Tevlin’s killing marks one of a series of crimes allegedly committed by Brown after coming to New Jersey from Washington State, where he also is charged with killing three men.

Four days after the fatal shooting, Brown allegedly robbed a man on June 29, 2014 at a coffee shop in Point Pleasant Beach.

In that case, Brown is accused of approaching the victim outside Green Planet Coffee, showing him a gun in his waistband and demanding that the man come with him, authorities said.

Brown was indicted on July 23 in that case on robbery, aggravated assault, carjacking and related offenses.

About two weeks after Tevlin’s killing, Brown is accused of robbing a man on July 10, 2014 in the parking lot of an apartment building at 200 Mount Pleasant Avenue in West Orange. Authorities have said Brown approached the victim, robbed him of his wallet and fled the scene.

Brown was arrested on July 18, 2014 when police found him living in a makeshift campsite in West Orange.

Brown’s troubles with the law were not limited to calculated acts of violence. The FBI was investigating Brown as far back as 2004 in connection with activities at a terrorist training camp in Oregon.

Two former FBI agents from the Joint Terrorism Task Force, or JTTF, told Fox News that Brown also may have traveled to one of the first terrorist training camps on U.S. soil when he was a teenager known as “Dog Cry Ranch.”

When former FBI Agents David Rubincam and David Gomez were interviewed by Fox in Seattle, Gomez said, “I believe Ali Mohammad Brown at some point traveled to Bly, Ore., prior to his arrest for financial institution fraud.”

The JTTF executed 19 search and arrest warrants in November 2004 after a 30-month investigation, which became known as the “Ranier Valley Roundup.” No one, including Brown, was charged with terrorism at the time.

Cracking Brown could help federal officials shed light on multiple investigations into US-based terror activity—some of which go back decades. We’ll keep you updated on the case as it moves through the courts.

Seriously, is Brown one of the convicts that Obama pardoned and set free upon society again?

What on earth are you thinking about? Where did you get the idea Brown has ever been convicted of anything? And which convicts, exactly, has 0bama “set free upon society”? I am not aware of any.

Are you a newcomer to LI? To answer your stupid question with a question, do all the illegal aliens who already had felony records (and who were currently charged with violent felonies that were released from ICE custody) count?

You need to seek help for your obvious mental malfunction.

As a kid, my parents would NEVER define a word for me (“go look it up!”)so learned to do my own research. You need to learn how to do that, too–gather as much info as you can, pro and con, and you’ll no doubt come to see, ‘wow, I cannot BELIEVE I used to think like a Liberal!’ You’ll love the liberation.

A former Muslim convert recognized “Ali Mohammad Brown” from a mosque he used to attend, and recalled another Muslim describing him as “excited about Islam.”

I don’t need to add anything more.

This was only a “little murder”.

There was no Collectivist narrative to be promoted.

This guy is a flat out nasty guy. He will try to escape if not watched carefully. Or he will try to kill a corrections officer in one final jihad. His leg irons should never be taken off and he should be kept in solitary. Any time he is moved, at least three officers should be present and electronic movement officials should be made aware.

Heh….. just sent an e-mail to the editor of our local paper. This is part of McClatchy Newspapers. The stock is currently worth about 1% of what it was worth in 2005 (it was around $75 a share and is now around 80 cents a share but did hit a low of 75 cents a share last week). I simply wrote and said, “If you don’t know who Brendan Tevlin was, there is a reason your stock is almost worthless.”

I guess he couldn’t even bother to Google it. He and I have had a running dialogue about bias at AP for a couple of years now.

There was no media coverage, because the victim was a white male. Now if the victim was the other way around, the media would have been leading the lynch mob. A couple of very excellent examples of this are, Trayvon Martin and Michael “The Gentle Giant” Brown.

This is just the beginning. And by design.

Thank goodness we have Boehner and McConnell to protect us.

With regard to your link of Obama picking his nose, it seems, depending on which nostril his finger is in, that he is deciding on which side of his mouth to speak out of.

As ye sow, so shall ye reap.