Okay to use Barbara Bush’s words against Jeb in attack ad? (Reader Poll)

Okay to use Barbara Bush’s words against Jeb in attack ad? (Reader Poll)

The Donald drops a “Your Mom” 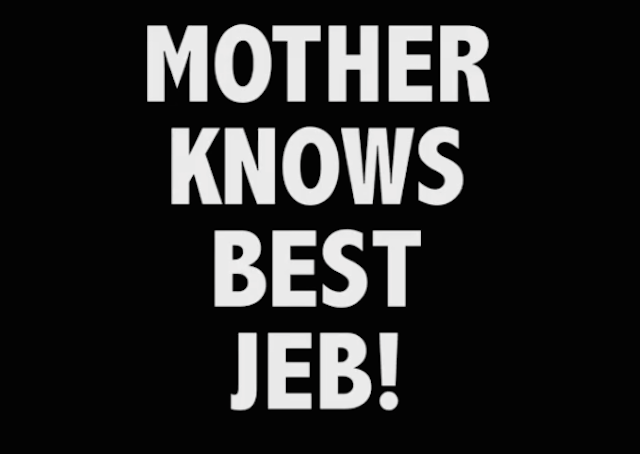 Trump forced Bush into a messaging pivot on immigration, revealed some ruffled feathers in the Bush camp, and successfully dangled reports that several of Bush’s donors have approached a Kasich-friendly PAC in Ohio.

When it comes to optics, Trump’s winning.

Trump’s latest social media offering, however, may just fall flat on its face. Team Trump put together a short Instagram video featuring family matriarch Barbara Bush uttering the words no Bush in politics ever wants to hear: no more Bushes.

Even Barbara Bush agrees with me.

It’s true—Barbra Bush said those unfortunate words in a 2013 interview.

She’s also played a significant role in Jeb’s fundraising efforts, so there’s an argument to be made that her words are fair game. The only problem is that she served up a good natured recant of her comment this year during a live Skype conversation that featured former President George H.W., saying, “I’m changin’ my mind!”

Trump can realistically do and say whatever he wants; but using someone with the personal appeal and gravitas of Barbara Bush as political ammunition is questionable. Particularly when there’s more than enough evidence to suggest that the former First Lady has since become convinced that Jeb is the best man for the job.

All’s fair in love or war.

Its the truth so why not?

However, I suspect that Barbara Bush
who has a very biting tongue will come
back with something very vicious.

And Trump already has a gracious comeback
I am sure.

Waiting for The Jeb!ster To Come Out Swinging: Pickin’ On My MOMMY! How DARE YOU! huff puff

It’s all part of the Political Kabuki Theater.

Mrs. Bush spoke those words from the heart and then recanted them due to political pressure from the GOP establishment…

Absolutely ok. She only said what most of us believe. Have had enough of the Bush dynasty.
She is a public figure and obviously at the time she thought what she said. Now, it’s obvious her son, and others, have persuaded her to think differently. That’s a mother’s prerogative. Just as it is ours – out here in the land of the rest of the populace – to reject Jeb Bush as a candidate/nominee.

See that long fork over there labelled, “Stick this in him, he’s done”? Well the button you’re looking for is right next to the fork. Push it and you will hear the fat lady singing, “No more Bushes.”

Y not? Especially since they were nice enough to out out the part where she says, “Jeb? My Jeb? Mr ‘We Love Illegals’ Jeb? Are you kidding me?”.

She’s a former First Lady… Just as an endorsement from her would be played for everything that it was worth, this is fair game. If it was the mother of, say, Ted Cruz, then no… under the premise that she is not a spokesperson, just a regular citizen. But First Ladies are NOT regular citizens… so yeah. Fair game.

MrMichael wrote: “If it was the mother of, say, Ted Cruz, then no… under the premise that she is not a spokesperson, just a regular citizen.”

Remember that regular citizen Roberta McCain whose son John ran for president not so many years ago? She dismissed his Republican detractors with the remark that “I think, holding their nose, they are going to have to take him.”

She is the matriarch of a freakin’ political dynasty, not some doddering, rambling old gramma.

By the way, Amy – really? What kind of doddering, rambling female do you see … when you look in the mirror?

“Trump can realistically do and say whatever he wants; but using someone with the personal appeal and gravitas of Barbara Bush as political ammunition is questionable. Particularly when there’s more than enough evidence to suggest that the former First Lady has since become convinced that Jeb is the best man for the job.”

Tripe. Stop whining, Amy. What are you, a Bushie?

OK, I get it, you don’t like Trump. It’s too bad objectivity is out of the question, but this passive-aggressive sniping is just irritating. Please come up with some substance!

How about an article on whether this country can be saved at all, or has the present lawlessness deteriorated the USA too far? Whether 40 million illegals is close to the “true” number, or is it actually more? Whether the Federal bureaucracy can be cleansed so that it actually follows the law as it once did? Whether the courts can be cleansed of the biased charlatans that have been subverting our system of justice?

If these subjects (or many, many more!) were addressed, you may discover why so many, and I stand proudly amongst them, support Donald Trump for President!

For lots more reasons, check out The Conservative Treehouse where the establishment plan is discussed:

Please, Eskyman, stop expecting the girl to think. You don’t want her to break her brain, do you?

Of course it is ok that Trump used Jeb’s mother’s words…she did say them. I am enjoying the heck out of this political season…a laugh a minute for sure.

The tally is currently at 81.82% for ‘yes’, the obvious answer, eminently predictable, and meriting no poll.

The GOPe is going to have their 2016 convention in Cleveland, Ohio! Not Bush country!

Hopefully, Trump will have such a predictable lead that by convention time the convention will come down to a Trump nomination.

The next republican presidential debate is in September. At the Reagan Library. And, I believe Nancy Reagan is hosting it.

Mama said knock you out…

Of course it’s okay to use it. Everyone knew that some opponent was going to use it against JEB if he ran as soon as she said it. She’ll likely release a brief statement and/or he’ll toss out a quick sentence about his Mom always having a mind of her own but behind him 100% and then it’s useless as an attack ad.
Unless Trump is stupid enough to go toe to toe with Barbara Bush. If he insults her, he will be toast.