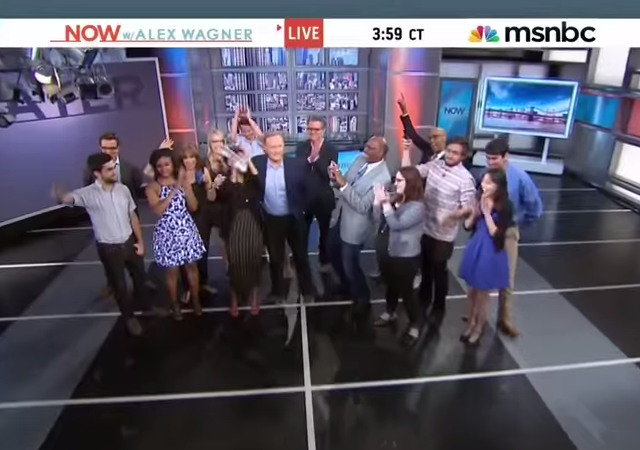 MSNBC has pulled the plug on three shows. The Cycle, Now with Alex Wagner, and The Ed Show will no longer grace the TV screens of the struggling network’s viewers.

Dylan Byers of Politico broke the story this week:

Alex Wagner and Ari Melber, a “Cycle” co-host and MSNBC’s chief legal correspondent, will remain with the network. Ed Schultz, the host of “The Ed Show,” will leave the network, as will “Cycle” co-hosts Abby Huntsman, Krystal Ball and Toure. MSNBC President Phil Griffin announced the news in a memo sent shortly after the initial version of this item was published.

The cancellations, which have been expected for some time, come as NBC News chief Andrew Lack moves to refashion the liberal cable channel as a straight-forward news and politics offering, at least in daytime. In September, MSNBC will add a 5 p.m. program hosted by “Meet The Press” moderator Chuck Todd, while Brian Williams, the former “Nightly News” anchor, will serve as the network’s breaking news and special reports anchor.

In honor of this occasion, NewsBusters has opened up their vault to look for some “worst of” moments from Alex Wagner and Ed Schultz. Here are a couple of examples:

There are so many more to see.

You’ll also be happy to know that Alex Wagner was a class act right up to the end.

MSNBC’s Alex Wagner, in closing the final edition of her canceled liberal commentary program Now With Alex Wagner, said “Woo! Shit,” as the camera faded to black one last time.

It is unknown at this time why she did this.

“…while Brian Williams, the former “Nightly News” anchor, will serve as the network’s breaking news and special reports anchor.”

Fits. Everyone on this “news” network is a liar.

The artist was Steam, a one-hit wonder group, not Sha Na Na, which was founded the same year (1969) but sang old do-wop ’50s songs.

“Na Na Na Na Kiss Him Goodbye” was later covered by Diana Ross and the Supremes and Bananarama, as well as every winning home college basketball team for about 40 years.

Just so YOU know, I did NOT downpoint YOU

Who are these people, and why should I care?

I dimly remember MSNBC was an experiment in cable-TV-tech with NBC and Microsoft that MS bailed on some time ago. I personally stopped watching and removed the channel from my surfing list when they fired Don Imus for referring to the Rutgers’ women’s basketball team as a “bunch of nappy-headed ‘ho’s,” which was merely descriptive.

It gives me a warm fuzzy feeling knowing that one of the biggest racist bigots I have ever seen is now without a job. Suck it Toure, I wish you the worst. Maybe you will have time to find a second name like a normal human.

Alex Wagner, “That was massive…whooo…shit”.

It would be delusional to expect any different in the future.

And they left Politics Nation with Al Sharpton? Well, I don’t watch that network anyway.

Sharpton has not just WH access, but Oval Office access. He isn’t going anywhere no matter how embarrassing he is nor how bad his ratings get. He’ll be cancelled about, ohhh, January 2017.

Depending on how well the replacements do, this is not necessarily a good thing. The fact that mainstream media is biased isn’t as obvious to people not as tuned into politics as is the LI crowd or those of other conservative outlets. MSNBC, in the form of nitwits like Wagner, Schultz, et al, is where doubters are directed for proof of the assertion of media bias – fully 85% of their content is pro-liberal propaganda – and proof they get.

As a ugly stepchild of NBC, MSNBC will always be biased, but they may acquire on-air talent who are far better at hiding the bias.

So, I do not rejoice in this. MSNBC has been so bad it can only go two ways – die and close shop or get better at honest news (ain’t gonna happen) or at better hiding their biases.

They should increase the hours they show of lockup and add cartoons if they want to increase their ratings. It is impossible for them to do that with straight news shows. No one will believe them.