Watch this, then go forth and enjoy your weekend 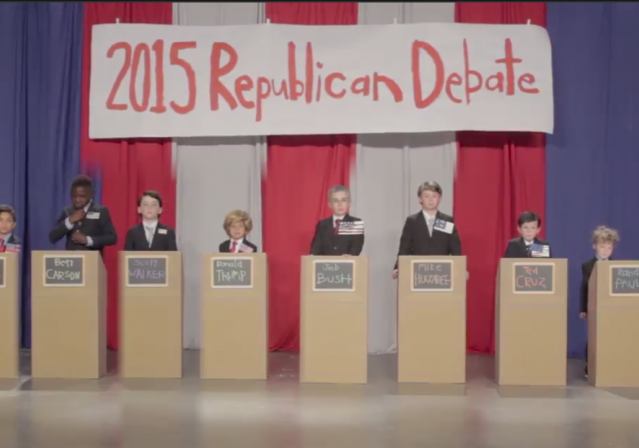 It’s been quite the news week. To cap it off and end on a cute note, might we suggest a condensed Republican presidential debate reenacted by children?

My personal favorite in this version of the debate is Rand Paul, because who doesn’t love the fourth amendment? Though Chris Christie’s air quotes come in a close second, followed by “I have a wife, and two kids, and a Harley,” Scott Walker.

Maybe next time, we should have these kids debate instead. It would be about as substantive and a heckuva lot cuter.

Yaa, cute physical representation but the Rand Paul thing I thought was in poor taste. BridgeGate was nothing compared to saying you’re in favor of general warrants. I also didn’t like Walker’s impersonation.

Jeb was hilarious though.

Rand Paul made it sound like the United State had given Humvees to (the allies of) ISIS. Nobody had the wit to point out that they’d been captured from the irai army in June, 2014.

PAUL: I’ve been fighting amidst a lot of opposition from both Hillary Clinton, as well as some Republicans who wanted to send arms to the allies of ISIS. ISIS rides around in a billion dollars worth of U.S. Humvees. It’s a disgrace. We’ve got to stop — we shouldn’t fund our enemies, for goodness sakes.

PAUL: So, we didn’t create ISIS — ISIS created themselves, but we will stop them, and one of the ways we stop them is by not funding them, and not arming them.

Donald Trump, meanwhile, said he’d opposed the Iraq war in July, 2004, and made that sound like it was BEFORE the war:

TRUMP: First of all, I’d like to just go back to one. In July of 2004, I came out strongly against the war with Iraq, because it was going to destabilize the Middle East. And I’m the only one on this stage that knew that and had the vision to say it. And that’s exactly what happened.

BAIER: But on ObamaCare…

(Jeb Bush had been asked or reminded of the question if knowing what we know now, we would’ve invaded Iraq.)

Cute, but Funny or Die has an ulterior motive. Of the top of my head, four of the Republican field are in their 40s (two of the under 45?). Considering that all of the Democrat party’s candidates (excluding O’Malley), or possible candidates, are at their youngest in their late 60s, Funny or Die is trying to paint the Republican field as inexperienced. (Elizabeth “Iroquois” Warren and Hillary are currently 66 and 67; Sanders is 73, while Biden is 72.)

You know in the back of their heads they dwell in it. It peeves them that they aren’t running the “youthful, looking to the future” candidate. It’s why, despite conservatives’ concerns, the Democrats are so terrified of Marco Rubio being the GOP nominee. Their hearts skip a beat when thinking of Clinton or Biden squaring off against a Walker/Rubio or Rubio/Walker ticket.

And the left tells you what they heard from each candidate – and which one to choose: Kasich.

The last line is ALL they make perfectly clear – he’s tolerant and “pro-gay marriage,” therefore he’s the one that Republicans with “compassion” who “care” MUST choose.

Goes well with an article I read that said Kasich won the debate (by Paglia, I believe). (If I find that link, I will “update-reply”. And an aside: they are pushing Kasich HARD as the golden “new & improved John Huntsman” over at Salon.)

The ironic thing is, they still don’t get that conservatives and Christians are the most tolerant people they will ever come into contact with. We don’t believe we should be forced/coerced to endorse, associate, and/or participate in things we don’t believe, nor would we do that upon others.

They like Kasich because he is willing to surrender to the cultural rot we find ourselves.

These kids are talented. Love the kid portraying Scott Walker!