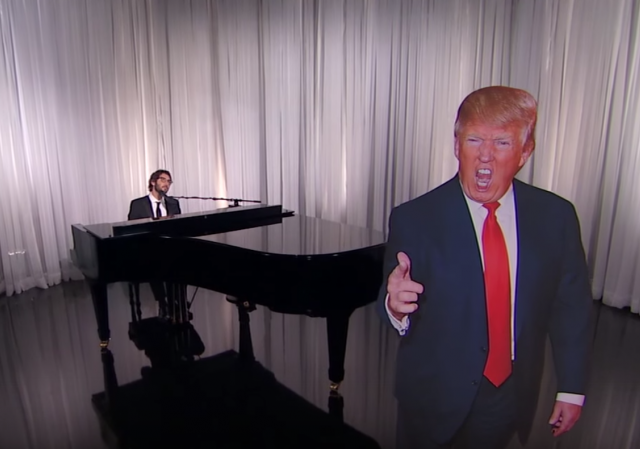 As part of a sketch, a piano-playing Groban sang tweets written by Donald Trump. The tweets are in fact, real.

Groban sang tweets penned by The Donald himself which read:

“Sorry losers and haters, but my I.Q. is one of the highest – and you all know it. Please don’t feel so stupid or insecure, it’s not your fault.”

For those disappointed The Best Tweets of Donald Trump is not actually a thing for sale, fret not. The Donald opened his official campaign store today.

Our online campaign store is open! Visit http://t.co/3zYiIYWs87 for #MakeAmericaGreatAgain merchandise including my signature hat!

For $25, you too can own this “Make America Great Again” official Donald Trump campaign hat.

Even the littlest Americans can get in on The Donaldmentum with this signature onesie.

But mostly, The Donald recommends the hat:

Who is Josh Groban?

I kind of know who Jimmy Kimmel is, having watched his show once, which was quite enough, but I’ve never heard of Josh Groban. Should I be grateful?

I wikioogled him. He’s sold a boatload of records. I need to get out more. Or not.

You’re not missing anything at all with Rogaine Grogan…..

There are times when I find knowing something more embarrassing than not knowing it.

Sad when entertainers are no longer entertaining

I miss the guys from JibJab:

“This land will surely vote for me!”

Is this really LI worthy? It’s like gossip column politics.

Story selection has been a problem.

I thought it was funny.

LI has truly been a great site, but this kind of stuff is a dangerous slope to slide down.

For example, would you want to be lumped in with Conservative Treehouse or Red State? It’s too easy for the idiot mob to push for your irrelevance; you have to be much, much smarter than this.

Kemberlee I enjoy knowing that Groban must be a Democrat propagandist. Keep up the good work exposing……