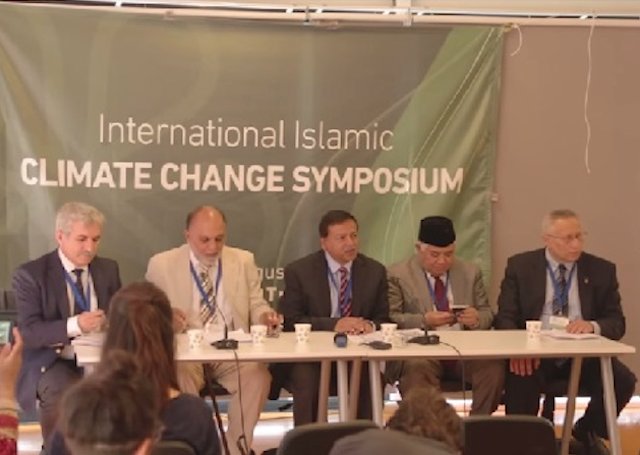 Spiritual leaders of Islam have now come together and spoken in unison against the greatest evil of our times. If you are waiting for these ‘holy men’ to condemn radical Islam or atrocities committed by Islamic State (ISIS) please don’t hold your breath just yet.

UK-based Guardian newspaper reports that Islamic scholars have “called on the world’s 1.6 billion Muslims to take action on climate change [sic]”. This came just days after Guardian ran another story with the headline, “Islamic leaders issue bold call for rapid phase out of fossil fuels”.

It is heartwarming to see Muslim leaders who can’t ever seem to get their act together in taking a stand against the radicalism in their faith are tripping over each other to get on Al Gore’s ’emission-free’ bandwagon.

According the report published in The Guardian on August 21, 2015 :

Muslims have a religious duty to take action against climate change, according to a declaration released by a major group of Islamic scholars, faith leaders and politicians from 20 countries. The Islamic Declaration on Global Climate Change, launched in Istanbul, is aimed at the world’s 1.6 billion Muslims and suggests mosques and Islamic schools should immediately take action.

University campuses across the Western world are about to get some serious completion, once Madrasas (Islamic schools) start rolling out the next generation of environmental activists, or should we say environmental Jihadists, willing to sacrifice their lives for the noble cause.

The Guardian goes on about how this re-branded ‘Religion of Peace’ is about to outdo the Buddhist in their own game:

(…) [R]ecently Muslim faith-activists have fasted for the planet. For example representatives from Wisdom in Nature, an ecological activist group in Britain, would fast so they could contemplate the human impact on the environment. Also, during pilgrimage Muslims must be considerate to animals and vegetation in designated areas.

Mainstream media might be awe of these ‘courageous’ and ‘moderate’ Islamic scholars, but let us not overlook the contribution of ISIS in reducing the Global Warming. By take large parts of Iraq and Syria back to the Stone Age, ISIS has reduced the Carbon Footprint of the area under its control in a single master stroke. Beheading, crucifying and shooting Christians, homosexuals and dissenting minorities in compliance with Sharia also ensure that they won’t be emitting ‘harmful’ CO2 anymore.

On a serious note; it is not a matter of some Clerics or Muslim scholars having their priorities backwards. In recent months, Radical Muslim too have been making common cause with Left-wing activists — from #BlackLivesMatter campiagn to anti-Israel boycott movement.

In this video, Missouri-based ‘Palestinian’-activist Bassem Masri is interviewed on CNN and explains the “cultural background” behind spitting at a police officer during Ferguson riots (Broadcasted November 22, 2014):

Leftist agitators, who were perpetually in search for groups with grievances, have found their perfect match in the migrant Muslim communities in the West. The Left has welcomed agitating Muslims with open arms, calling it the “Radical Inclusion.”

Far-Left and Muslim extremists not only share the same enemies, they also share the same temperament. Both are always looking to be offended and can’t take responsibility for personal actions, once ‘provoked.’

Their unrelenting hatred of the West has brought them both together; let’s see how long the Love-Fest lasts.

Where have they been? I listened to sermons about global warming in (a mainstream protestant denomination) church over a decade ago. It has since divested its holdings in Israeli companies, and…oh never mind, it’s a long list.

They don’t give a crap about global warming. They are just keeping muslims aligned with their leftist apologists.

Yeah! I wonder how many Billions of U.S. taxpayer money was paid to them by Obama for this?

Right! And how many billions did Obama slip to Pope Francis under the table for coming out with his Global Warning Propaganda, and for saying that equating Islam with violence was wrong?

The Pope must be a Lefty stooge for the progressive Libtard Democrats! Or a secret Muslim himself! God must be asleep at the wheel, letting Francis get away with that! All Conservative Catholics should convert to more proper patriotic religions!

“One, he wanted me to help re-inspire children to want to get into science and math; he wanted me to expand our international relationships; and third, and perhaps foremost, he wanted me to find a way to reach out to the Muslim world and engage much more with dominantly Muslim nations to help them feel good about their historic contribution to science, math and engineering,” Bolden said.

Not so much KWAZY as STOOPID to link that Bolden comment with supporting Muslims in the sense that he’s aiding and abetting our enemies.

Those of us who follow NASA criticized Bolden’s statement when it first came out, not because Muslims were referenced; but because NASAs mission is spaceflight, not education. Plus it’s doubtful Obama ever stressed NASAs mission as Bolden stated. Bolden was a competent astronaut and solder who turned out to be a goofy administrator, universally disliked by the space community for bad management and foolish comments galore.

(to keep you from you usual lazy-ass demands for a link, try this one: http://www.spaceflightinsider.com/editorial/happened-charlie-bolden/ )

I don’t like Obama, never have; he’s as devious and untrustworthy with the truth as you are. But him reaching out to try to mend fences with the Muslim world at large is what US Presidents are expected to do. Or are you STOOPIDLY suggesting all 50 Muslin nations be exempt from ALL US aid? Should future US Presidents be required to tell them to screw themselves? Would that go for Turkey and Jordan too?

So we can expect that all of the Muslim counties in the Middle East will soon stop pumping petroleum oil?

I wonder how much CO2 is emitted from a suicide vest?

They want to tackle global warming? How about they start small, like not treating women as second class citizens.