Impending Hilarity: You can now review federal agencies on Yelp

Impending Hilarity: You can now review federal agencies on Yelp

We give the TSA…negative two stars

Put on your trollin’ pants, people—it’s time to sit down the federal government for an annual review.

The federal government has partnered with online review service Yelp to set up official government agency profiles that Americans can drop in on to leave a tip, a review, or a (one star? probably) rating.

A message from Yelp’s official blog touts this as the government’s next big foray into social media:

It’s clear Washington is eager to engage with people directly through social media. Earlier this year a group of 46 lawmakers called for the creation of a “Yelp for Government” in order to boost transparency and accountability, and Representative Ron Kind reiterated this call in a letter to the General Services Administration (GSA). Luckily for them, there’s no need to create a new platform now that government agencies can engage directly on Yelp.

As this agreement is fully implemented in the weeks and months ahead, we’re excited to help the federal government more directly interact with and respond to the needs of citizens and to further empower the millions of Americans who use Yelp every day.

Props to Yelp for helping us avoid another techno-bureaucratic nightmare; I’m guessing this “Yelp for Government” idea would have cost taxpayers about 75 billion dollars in funding and three years’ development time before the whole thing came crashing down with less fanfare than was given the Change.org petition site.

At any rate, I think we can all see where this is going—and in fact, it has already started. Presidential hopeful Carly Fiorina took to the site to pan the TSA, and tout her small-government narrative: 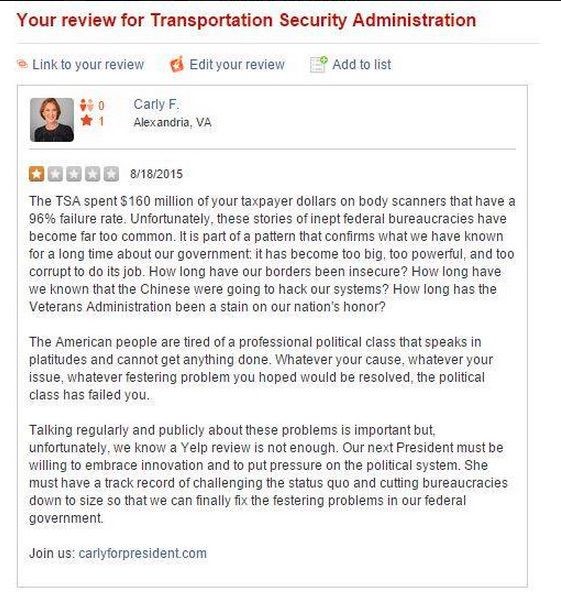 I see this as nothing more (or less) than a golden opportunity to grind another half-assed “hope and change” scheme into the dirt. As Gizmodo points out, leaving a review won’t make much of a difference in how these various agencies view themselves; vendors on Yelp are notorious for using friendly patrons to up their rankings, and there’s no reason to believe that more enterprising government digital teams will do anything different.

Still, there’s something to be said for a little good-humored trolling of our big government overlords. After all—they’re the ones who opened the door!

“We give the TSA…negative two stars”

I would hate to be any of the poor souls stuck with reading and tallying the responses.

Oh yippee. Another useless activity to require more government bureaucrats pulling down six figure salaries and benefits while rendering exactly zero service to the citizenry, who get to pay for it all.

great. now we’ll have a damned yelp czar
what idiot would really think this is a good idea.

A big to-do over nothing.

Once they start seeing the results, the whole mess will disappear faster than Hillary’s emails.

What an excellent way for the government to identify people who hold the wrong opinions. Hmm, I wonder if they’ll send the data to the IRS, the NSA, or both.

i can’t wait for a chance to rate the VA…

nor can most other vets.

It’s likely that most of the reviews would be deleted. That’s what Yelp does: https://www.change.org/p/jeremy-stoppelman-yelp-post-the-reviews-stop-preventing-users-from-seeing-your-contributors-posts