How the Democrats’ debate problem could hurt Hillary

How the Democrats’ debate problem could hurt Hillary

Will they protect Hillary Clinton or have a real contest? 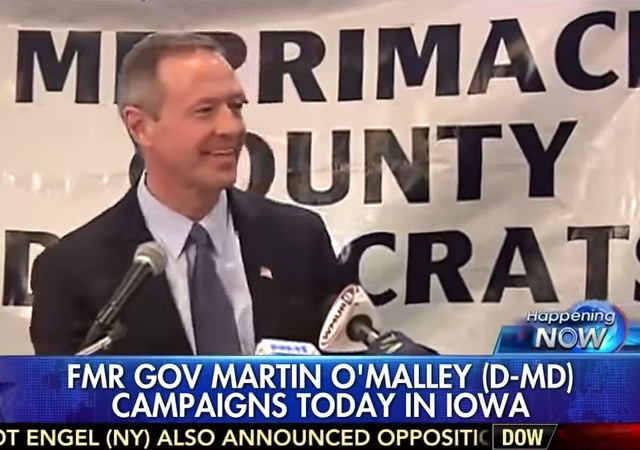 The Democratic Party recently released its primary debate schedule and compared to the prolonged schedule of 2008, it’s tiny.

Party leaders are obviously trying to protect Hillary Clinton by limiting the amount of damage that could be done to her campaign in debate soundbites and video clips, but her Democratic rivals are calling foul.

Ed Henry of FOX News recently shared what he’s hearing from other Democrats and makes an excellent point. Back in 2008, the brutal primary battle between Obama and Hillary made Obama a better candidate.

Fox News correspondent Ed Henry said Friday Democrats have told him they are “worried” about Hillary Clinton’s ability to get into general campaign shape due to the party’s limited debate schedule and her avoidance of the media.

“I hear from Democrats, actually, they’re worried about Hillary Clinton,” he said. “Not taking a lot of questions from the media, although she’s started doing more, we should note. But also not doing debates until later because she’s not going to get into fighting shape. One reason Barack Obama was so tough in 2008: he had a brutal primary against Hillary Clinton. A lot of debates. They were tough. They mixed it up, but that made Barack Obama a better candidate.”

A column by Hillary Chabot of the Boston Herald echoes the same sentiment:

“Six may be too few,” Sullivan told the Herald. “Personally I’d like to have a debate after Iowa and before the New Hampshire primary in New Hampshire. That’s not on the schedule. I’m a member of the DNC, so they’ll probably get upset with me for saying that, but that’s how I feel.”

The Democratic Party’s efforts to protect Hillary Clinton could backfire in the long run. By trying to shield her from challenges, they’re only accentuating her vulnerability.

“It is better to keep your mouth closed and let people think you are a fool than to open it and remove all doubt.” – Mark Twain

“It is not that I believe that there are too many idiots in this world, just that lightning isn’t distributed right.” – Mark Twain

One reason Barack Obama was so tough in 2008: he had a brutal primary against Hillary Clinton. A lot of debates. They were tough. They mixed it up, but that made Barack Obama a better candidate.”

1.) “Barack Obama” and “better candidate” should NEVER appear in the same sentence together.

2.) The debates in 2008 didn’t make Obama a better candidate, they showed that in a weakened Democratic field, the Main Stream Morons would choose an African American with virtually no national experience (2 years in the Senate) over a White Woman with 8 years in the same institution, who had been on the national stage (as First Lady, and then as a Senator) for over 15 years.

The blank picture that was Obama allowed the Democrat “paint-by-numbers” crowd to put whatever they wanted into the frame. What they got was a purified Marxist, which I hope will have seriously damaged the Democrat brand for decades to come.

Obama could be caught on the south lawn of the White House raping a small boy and murdering a small girl, and the Dim base would still vote for him if he ran for a third term.

Obama was a fantastic candidate in the 2008 cycle. His ground game was amazing. He out-machined the Clinton machine. Hillary was dazed and confused, her team didn’t know that the Democrat’s primaries were “Winner-Take-All” compared to the proportional system the Republicans were using.

Now, if you want to say Obama was a sham propped up by his team from the Chicago machine and a press full of Democratic sycophants, I’d agree with you. But that doesn’t diminish his obviously powerful ability to clothe himself in a messianic glamour in front of a friendly audience. The debates helped him hold onto this ability in front of a somewhat ambivalent audience. Making him a stronger candidate.

Smarter Dems realize that Hillary Clinton in 2015 is not the tabula rasa Obama was in 2007 and she can never be an empty hole voters fill with imagined talents and worth. Debates, as the Dems know and fear, will only amplify and broadcast Hillary’s great weaknesses. Hillary has the Orwellian problem of being too well known by voters.

Know this – if a younger female or Hispanic Democrat candidate suddenly emerges in the near future, it means the Dems are bailing on Hillary.

Julian Castro? Why not? Mayor of San Antonio and 1 year HUD Secretary is about as much qualification as Obama had. As an added benefit, he grew up on the knees of America-hating Socialist racists, just like Bam-Bam did.

Excepting the Cherokommunist (MA), they’re all much younger than Clinton, they’re all reliable progressives, and none of them have much of a record for other Dem candidates to attack.

Part of any plan to bail on Hillary for another candidate must include instructing the media how to define and present the newbie, likely to be of low name rec among Americans. I suspect if the newbie is sufficiently liberal, media will fall all over him/her and paint a very pretty picture, indeed. Like the one they painted of Obama being a brilliant uniter, a statesman of great character who cared nothing for himself, seeking only toi serve the needs of our wonderful country and its wonderful citizens, every one.

Heh, McCain, nice one. A real progressive war hero that one.

I am keeping an eye on the mad scramble to find black Democrats to run for the US Senate and for statewide offices in 2016. I would not be surprised if there will be blacks in both top of the ticket statewide races in North Carolina. In Illinois, where the only black politician other than Obama to have statewide appeal is in his 80s, the Chicago machine is pushing a candidate who is less black locking than Obama and who has even more ivy on her resume and who is married to a retired white DEA agent in an attempt to recapture the magic Obama had on the black vote.

Democrat insiders are terrified that the blacks who massed to poll in 2008 and 2012 will stay home in 2016.

The fact remains that without heavy turnout among urban black voters who overwhelmingly support Democrats that party ceases to be a national political force. With moderate to low black turnout and only 80% support for Democrats the only areas the Democrats would be sure to win would be a handful of urban enclaves, college towns and Indian reservations.

Exactly. They shield her because they must. She has no answers for the obvious questions because she is in fact corrupt, incompetent, and broke the law.

Two weeks ago a local news anchor asked her a generic email question, and she stumbled around for two minutes like a crook trying to explain to a cop why she has the bloody knife in her hand. After all this time, she still doesn’t even have an answer for amateurs.

If she has a significant lead in polling for the general, she won’t debate at all there. Only if it is close, and she feels she must.

Any candidate who has the MSM 95% behind him, who are willing and able to bury any actual truth about that candidate, and who has billions of illicit dollars to promote his- or someone’s- agenda, and who has scriptwriters to feed his teleprompters (without those, he’s a dunce)-

Well, I think my point is made.

It was the caucus states where Obama really beat her up. Intensity counts the most in caucus states. It is also a transparent system. The bad blood continued to the general election and beyond from women and homosexuals who came out to support Hillary and who found themselves at war with goons for Obama from radical labor unions.

The Dem debates will be a series of open book / open notes spelling bees.

Can you spell victim?

The Politburo has spoken, the Supreme Soviet will endorse their decision, or else.

For some reason, I very seldom read anything about the great love affair between loveable ol’ Hitlery and that wonnerful guy Obama. Odd, isn’t it?

Actually they each loathe, detest and hate each other; I’ve heard whispers that Obama, not that he’s vindictive or anything, is just waiting for the best moment to reveal his parting gift to Hitlery; it’s to be a great surprise!

I’m waiting to see what that surprise might be, and whether Uncle Joe Biden, Obama’s loyal sidekick, might be in on the gag!

(I remember back in my past, just starting Uni & didn’t know hardly anybody, when I was invited to a party by an acquaintance that I had met. On entering the door, a big bucket of water was dumped on my head! What a surprise! Everybody there laughed & laughed. I was so glad I’d dressed in my best clothes. Didn’t stay long, but for some reason I remember that happening like it was yesterday; it was actually 1965.)

OT- anybody else finding that the “Preview” button isn’t working? Happens quite often to me.

Like Nixon, Obama is one of those loners with temporary allies but no friends: He is suspicious of almost everybody. The Clintons are still bitter over Obama playing the race card on them in 2008. For liberals of their vintage, especially a Southern liberal like Bill, that is an equivalent to a blood libel.

The preview button has never given me any trouble, but I;ve had trouble using the website altogether. Today may be better.

If you make any changes, you have to hit Preview again to see them.

ALSO the Preview doesn’t reload the page, it just appears and I have to scroll down to see it, but it is there.

In 2008 Obama was the candidate with the superior ground game in the caucus states where mere handfuls of people determine the outcome. He didn’t fare nearly as well in many primaries. In Democrat strongholds in Appalachia he often got less than 20& of the vote. The more radical leftists who have always been suspicious of the Clintons dominated in the caucus states. A lot of this was because they used SEIU thugs as shock troops at the caucuses.

In fact, Obama and Hillary ended the primary season almost in a dead heat in terms of delegates. It was the so-called Super delegates to gave the nomination to Obama. Those were other elected politicians and Democrat party officials. High on their list of reasons to prefer Obama was the fear of offending black voters.

She needs answers, and she doesn’t have any.

So it is the best course for her to avoid questions and debates as much as possible. It is sound political advice and in her case, sound legal advice as well.