“the only connection the family has” 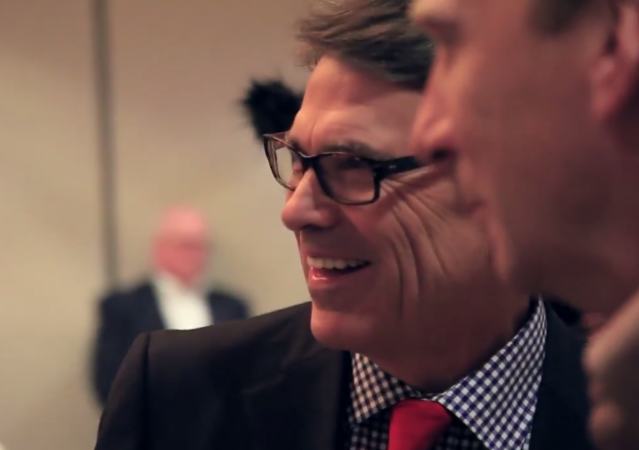 Governor Perry shared a heartwarming story or as Perry called it, “a sad story but a good story.”

Perry recalled the time a grandmother of a fallen marine reached out to him. She was hoping Governor Perry would be able to assist in having her grandson’s service black lab, Eli, returned to the family. Eli’s, “the only connection the family has,” remembered Perry.

“He had this black lab that he idolized named Eli. Right before he deployed he told his mom that when he finished up this tour, he was going to return to Orange Grove and raise puppies with Eli. He got killed by small arms fire.”

The Marine Corps denied Governor Perry’s initial request to return Eli to the marine’s family. Not satisfied, Perry “went up the chain,” finally contacting the Commandant directly. Two weeks later the Commandant called Governor Perry and said, “Eli is on military transport… with the instructions — don’t put anything on him except loving hands.”

Eli was returned to the marine’s family. Where, “a year ago last May, he sired his first set of puppies.” Though he wasn’t there to see it, the marine’s dream lived on.

Rick Perry is a fine man and on my short list for prez. You won’t find a negative word about him from me on this blog. I made the above post because out of the blue, this warm, fuzzy post is put up on the day after Perry failed to impress much in a debate. I think the general word is he neither hurt nor helped himself much in the 5 pm debate, and that Fiorina outirght won it. Big donors are almost certainly looking in other directions now. If Perry fails to make the top ten for the next debate, he’s pretty much toast. This is just the way it is in politics.

I made the snarky post above not to denigrate Perry at all – he remains on my top five short list for the GOP nomination – but because the Eli adoption happened 4 years ago and is not news. This article is an attempt to rehab the fading Perry, but it is not labeled as an essential campaign ad. I find this at best one of the increasingly common ‘who/what/where/when/how’ failures in LI articles, and at worst it is simply dishonest.

Rick Perry is a fine man and would make an excellent president. I pray his start begins to rise.

Well golly gee whiz. I wonder how that story was pried out of Perry.