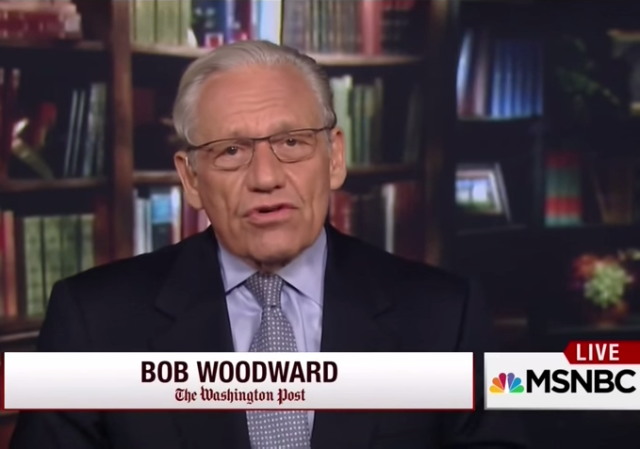 Bob Woodward and his Washington Post colleague Carl Bernstein broke the Watergate story over forty years ago but everything old has become new again.

Yesterday on MSNBC’s Morning Joe, Woodward made a direct comparison between Hillary Clinton’s emails and Nixon’s tapes. Jesse Byrnes of The Hill:

“Follow the trail here,” Woodward said on MSNBC’s “Morning Joe,” noting that emails erased from Clinton’s private server when she led the State Department were either sent or received by someone else, too.

“You’ve got a massive amount of data. It, in a way, reminds me of the Nixon tapes: thousands of hours of secretly recorded conversations that Nixon thought were exclusively his,” Woodward said…

Clinton, now a Democratic presidential candidate, turned over her server last week to the Justice Department amid a federal probe after questions about her private email haunted her on the campaign trail for months.

Here’s the video of Woodward’s remarks via the Washington Free Beacon:

As if all of this isn’t ironic enough, here’s another historic twist. Early in her career, Hillary Clinton worked with the House committee which oversaw Nixon’s impeachment.

Way back in 2003, Ben Shapiro wrote this rather prescient column for TownHall:

Hillary Clinton cut her teeth on the Watergate scandal. As a counsel for the House Judiciary Committee impeachment inquiry staff, she made it her mission to topple President Nixon. Hillary helped drafted a document that would provide the legal basis for three articles of impeachment. The House Judiciary Committee’s former chief counsel, Jerome Zeifman, later revealed that the Hillary-penned document changed the existing impeachment protocols in order to burn Nixon. According to Clinton biographer David Maraniss, Hillary believed Nixon was “evil.”

Yet more than any other political personality, Hillary resembles her nemesis. Not in policy matters: Nixon was a center-right politician, while Hillary is a far-left radical posing as a centrist. But in terms of career path, Hillary has clearly patterned herself after the man she loved to hate.

What’s that old saying about being doomed to repeat history?

This is actually great!

This long, slow, excruciating pealing of the onion that is Collectivist lying and arrogance, with fully press collusion, is very good for the country.

Obama and Hellary hold themselves (or Holder themselves, HEH!) above the law, as did Dollar Bill back in the day. The law took a chunk out of Dollar Bill, but he managed to come back with help from the liars in the media.

But nothing really changed for any of these pukes, and now we’re getting the exposition of their corrupt dealings since leaving the White House, their awful performance in office and out, and the utter contempt in which they hold the American people.

Hellary was ALWAYS someone who loved and made lies. It is her “core value”, alongside a lust for power that seems all-consuming.

1) Nixon was smart. He wrote books. He studied. He was a practical intellectual who could hold his own in any conversation. He had a deep knowledge of foreign affairs.

2) Nixon was competent. He accomplished things as a legislator and as a president. He wrote and signed bills.

Now then, Nixon was indeed a crook. He disgraced the office of president. If Hillary is ever elected, she and Nixon will be the same in that regard.

Now then, Nixon was indeed a crook.

They investigated and they couldn’t find any financial irregularity involving him. And they tried.

The best they could come up with was the fact, that before the law changed on July 25, 1969, he had donated his Voice Presidential papers (which cost him nothing) and taken a charitable tax deduction. This was nothing worse than taking tax advice.

He disgraced the office of president.

A lot of that was by doing things that were not illegal – just his whole attitude. He was cponcerned about “public relations”

CHRISTIE: Let’s just have an analogy here. Can you imagine if after the bridge investigation began, I came out and said, oh, by the way, I’ve done all of my business as governor on a private server and I have deleted now 30,000 of those e-mails, but trust me, none of it had to do with the bridge. Give me a break. I mean, she wants to talk about being held to a different standard? What she’s doing is refusing to be transparent.

Drudge is linking to a Daily Mail article about Platte River Networks. At the time Hillary employed the firm to manage her server, it was run out of a residential apartment and kept the servers in a bathroom closet.

Embarrassing, yes, but I like the article because at the end of it they have a helpful time line summarizing the key dates and events in the server saga.

We have seen this before, over and over again. People who allow themselves to believe they are on the side of the angels can convince themselves to do any stupid, evil act. The situation will only get worse unless they are checked by other people. That phenomenon is the foundation of the adage “power corrupts.”

The genius of the American system is its thorough division of powers, so that bad decisions can be rescinded, after they have been tried.

“…thorough division of powers…” I wonder if you have been paying close attention lately?

I think she was saying “as designed and intended”. Not as corrupted.

Indeed follow those Hillary-deleted emails – each one had a sender or a receiver.

No doubt Hillary put word out months ago to all those correspondents, to launch a mass obliteration. But the internet is all too much eternal, and some evidence will still be reeking to be discovered.

Personally see Trump as rather Nixon-esque, but Hillary fits too.