Latest tactic to deal with email and server scandal. 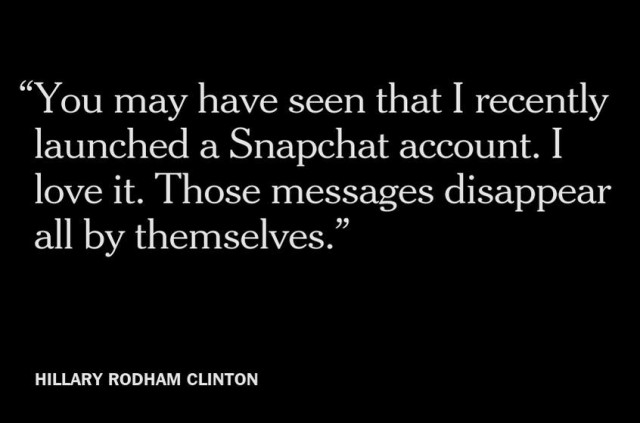 Hillary still is the odds-on favorite to get the Democratic nomination because of her enormous war chest and gigantic operative staff and SuperPACs.

But the Clinton Machine is not doing nearly as well as expected, and is in trouble in early states against Bernie Sanders. The crowds are turning out for Bernie, and Hillary’s favorability and trustworthiness ratings are plummeting.

Part of this is driven by Hillary’s inherent phoniness and crony capitalism, but much of it is being driven by the email destruction and private server scandal.

First, there was denial.  At her March 10, 2015 press conference Hillary denied there was a problem, and insisted that there was no classified information used on her personal email account.

Second, there was anger that anyone would want to inspect the server, since it contained personal messages between her and Bill.

Third, there was bargaining. We’ll give you documents, but only what we want to give you, and when we feel like giving it to you. But no inspection of the server. Never.

Fourth, there was depression, with the disclosure that there were Top Secret satellite and signals intelligence contained in emails, and that the Intelligence Community Inspector General had recommended an investigation into the potentially criminal mishandling of intelligence information.

Hillary and her campaign handlers are having trouble with the Fifth Stage, acceptance that the investigations and the damage to her campaign are not going away and doing serious damage.

So, in a completely contrived attempt to make light of the situation, Hillary’s handlers had her joke about how she just opened a Snapchat account and loves it because the messages disappear on their own.

Disappear on their own. Laugh, laugh. Oh, this is all just such a big joke. Nothing to see here, move along. You all will get over it because I’m Hillary.

For die-hard Hillary fans, this will be enough.

But the email scandal isn’t going away, no matter how much Hillary laughs at it.

And she and her handlers know it.

Those messages may disappear, but the screencaps are forever.

Yes. The Internet never really forgets. When will politicians learn that?

The really funny thing is Hillary doesn’t even know what snapchat is. Somebody wrote it for her to say but snapchat is for teenagers who use it mostly for sexting and sending photos they don’t want their parents to see. Some adults use it like Anthony Weiner, who uses it for his weiner, but it’s mostly a young people thing. For a 68 year old woman to talk about using it because it automatically deletes embarrassing things is hilarious. Maybe Bill uses it though. He’s a weiner.

That’s just like Obama – he is not tech savvy. He didn’t even know in 2008 that photo-taking cell phones had been around more than a decade by then. Democrat Party of Dunces!

The laugh montage should have a warning attached to it, or be tagged as psychological horror.

It has great potential for horror movies.

Now, the question is, will that matter to Collectivist voters in the primaries? There are some indications that it WILL.

So, she can yuk it up with the few people who come to her rallies, but even her opponents are going to have to start attacking her directly very soon.

Sanders is killing it, Joe Biden is waiting in the wings, and now ManPigBear Gore (creator of the intertubez) has been contemplating his chakra (er) a possible run.

This is gonna get ugly for Hillary.

Sanders is killing it but unfortunately is short of big time backers.
Biden is waiting in the wings, on his tiptoes, with his head sticking out of the curtains looking to see if obama has given the signal.
ManPigBear Gore is sniffing around the environment hoping that someone will give him a shove but they’ll have to push awfully hard because he is old news.

The numbers who believe in Hillary are in the low 30s, or about the same as would vote for a third Obama term.

We must resist the natural question, “Who the heck are these people?”

We educated them (or stood by silently as the system miseducated them). We made it so easy to register to vote they don’t even have to go to DMV anymore, then we badgered them to register.

We made it so easy to vote anyone can do it from home, or have it done for them, then we hector them to vote, even though most of them pay no attention at all, get their news from The Daily Show, and decide based on who they would rather drink a beer with.

No, my friends, WE created this monster just as Dr. Frankenstein created his. Killing it will take more than a few peasants with torches and pitchforks, and it won’t involve much neon.

So Hillary does not believe in the FOIA, which is already obvious from her secret server. But now she admits she wants to destroy evidence automatically, so she doesn’t have to bother with all the dodge and weave lies.

I mean really, the only humor in her joke depends on her belief that if her secret messaging disappeared, the crime disappears. For a Clinton used to getting away with crime, it would be so convenient for evidence of known crimes to disappear like a cement shoed witness in the Hudson.

May I note for the record that I first heard about Snapchat, in the context of making messages magically disappear, from reports concerning the contents of email from the mysterious Lois Lerner.

And Hillary must have heard of it the same way and thought, what a great idea, wish I would’ve thought of that.

Of course, there is no penalty at all for violating FOIA – NONE. The very worst that can happen to a government agency which flaunts the law is that a citizen or group will invest a lot in lawyers and eventually a judge will order the agency to comply with the law. IOW, what they were required by the law to do in the first place.

Imagine if the penalty for bank robbery was just to give back the money.

Unfortunately for Hillary, she chose to violate other laws. The Federal Records Act doesn’t carry heavy penalties – or any that are likely to be enforced – but the lengths she went to avoid complying must be explained.

And mishandling classified documents is a felony, even without labels: if you have security clearance, you are required to use judgment on everything that passes through your hands.

Petraeus and Berger got away with fines and an end to their careers, but Thomas Drake went to prison for forwarding a few unlabeled classified emails he was sent. They weren’t even Top Secret.

On the bright side, orange is Hillary’s best color.

“Four guys walk into a consulate in Benghazi….. “

This is like Bill Cosby joking that you better be careful drinking something around me.

…the former Cosby Show star paused his routine when a woman in the front row stood up mid-performance to go get a drink.

When Cosby questioned her actions, the audience member explained she was off to the bar and asked if he wanted a drink.

Cosby reportedly replied, “I already have one,” gesturing to his bottle of water. “You have to be careful about drinking around me,” he added