Hillary Clinton Compares All of Us to Terrorists

Hillary Clinton Compares All of Us to Terrorists 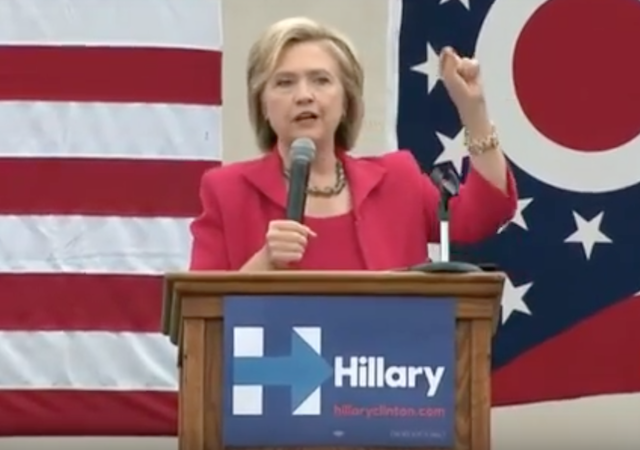 It’s election season, which means it’s time to start making strained comparisons between our opponents and various historical despots. The left enjoyed fantastic success after comparing George W. Bush to Hitler—and why not? Nothing says “leadership” like invoking the spirit of a madman who perpetuated genocide on three continents.

Hillary Clinton kept the tradition alive at a rally in Cleveland, where she compared GOP candidates’ efforts to protect life to the crimes committed by terrorist organizations.

…Marco Rubio brags about wanting to deny victims of rape and incest access to health care—to an abortion. jeb Bush says planned pare shouldn’t get a penny, your governor right here in ohio banned state funding for some rape crisis centers because they sometimes refer women to other health facilities that do provide abortions.

I would like these Republican candidates to look the mom in the eye who caught her breast cancer early because she was able to get a screening for cancer or the teenager who didn’t get pregnant because she has access to contraception. Or anyone who has ever been protected by an HIV test.

Now, extreme views about women, we expect that from some of the terrorist groups, we expect that from people who don’t want to live in the modern world, but it’s a little hard to take from Republicans who want to be President of the United States, yet espouse out of date, out of touch policies. They are dead wrong for 21st century, for America. We are going forward! We are not going back!

Sort of makes you miss the days of “BusHitler,” doesn’t it?

Odd. Like with Barracula, she can’t call actual terrorists “terrorists”.

Calculated outrage. She needs to make headlines, cause controversy, anything to stop the steady drum-beat of evidence against her in the news.

And, for one day, it worked. I wonder what she will say tomorrow?

She is a horrible public speaker. That grating voice. I was too focused on the overall nauseating ensemble of bad optics, bad styling, and laughable speech capabilities to actual listen to what this shrieking harpie had to say.

One of the items that barry and hilly have in common, no prob, it’s just a little thing….Saul Alinsky.

This level of dishonesty is frustrating.
Who has said anything about not allowing screenings for cancer?
This is not just fallacious; it’s downright dishonest. It’s disgusting.

No abortions: no cancer screenings. Can they be any more despicable?

Nope. They’re pretty much on the bottom of the scum pond, drilled down in the muck.

John Hinderaker at Powerline exposed a bunch of lies Obama told about the Kochs and energy policy in a post I read today (may have been written yesterday).

I really wonder if it is possible for Democrats to tell the truth, or not lie, about anything.

Yes, it is not unimpossible to not be untruthfully dishonest. It just depends on the meaning of lie.

How many Planned Parenthood Centers are certified to do mammograms?

According to the reports I’ve read, the answer is … … …

So much for breast cancer screening.

PP makes most of their money providing abortions. They make the rest providing birth control. They don’t do anything else.

Well, they do bring in some extra cash by selling baby parts.

The implication she’s making is wrong to boot. Early screening for breast cancer doesn’t affect statistical mortality. Many studies show it, that’s why the medical establishment is backing off on promoting aggressive breast cancer screening. Not to mention women cutting up their bodies quicker than ever in fear of it.

A disgusting woman. She should be in prison. How she roams free and is still able to infect democratic society with the ugly scourge of herself is a damning marvel.

Just how is a woman “protected by an HIV test” ?

Hillary reeks of desperation. On top of her usual bourbon, sulfur and old lady smell.

Just how loco en la cabeza do people have to be to see her as a future President of the United States?

Gosh, I got my cancer detected and no one offered me any baby parts, not even for lunch.

Terrorists are the guys who killed the Americans serving in our embassy in Benghazi. You left them to die.

Correction, you left them to be murdered, and then lied and tried to cover it up. Lies that have been repeatedly exposed.

You don’t belong in the White House, you belong in Prison.

It is likely that the terrorists learn of Ambassador Stevens trip to Benghazi from the emails on Hillary’s unsecure server.

And this from a woman who thinks its OK to lie to women about her covert computer server email use; a woman who has jeopardized the national security of women; a woman who is no different than Al Sharpton when it comes to blatant pretentiousness.

Before we talk about breast cancer scans we’d like to scan your private server(s) and all your electronic devices Hillary.

Your covert actions-harboring and disseminating unsecured national security information- were premeditated and can be considered as aiding and abetting terrorists act against the U.S.

Hillary to Huma (a Weiner by any other name): “But, now, let’s talk in baby talk terms about yoga and weddings…because women like to hear about that ‘stuff’. And, let’s pretend that I wiped the server with a rag because women don’t know anything about computers and I’ve heard that the lower class does housecleaning. My followers will gobble up the female anecdotes and analogies.”

Hillary, you are so dismissive of women. You make me sick.

If it weren’t for double standards, they would have no standards at all.

When you’re a criminal and you’re caught, you need distractions.

My beloved state of Ohio sadly voted for the current guy twice. Traitor is a fitting descriptor, but terrorist is ridiculous.

Hillary is so discusting. She & her Bill have committed so many criminal acts that both should be in Prison. She plans to finish the USA destruction and only wants all the money & control she can get. She tells so many lies & even early in her career, she was caught lying to Gov. Agencies. She was promised the Pres. in 2007, next time if she stepped aside for Obama. ( World Bankers ? ) All of these Candidates running against her is just a ” Show.” The Donald has scrambled the playing field for the ” Elites.”