Deal with it, Phelps 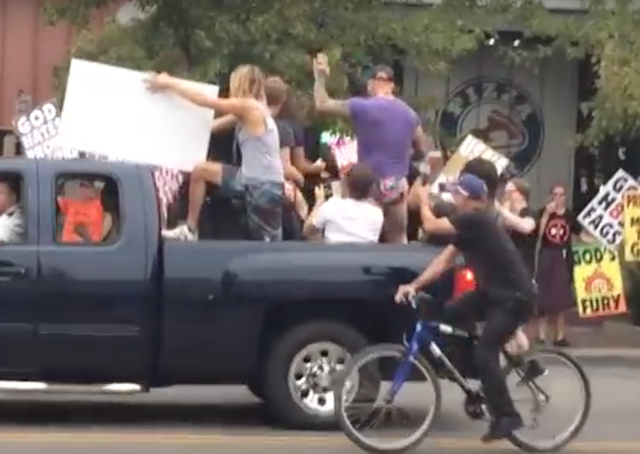 Let’s start the week off right with a topic I think we can all agree on: the Westboro Baptist church protesters are monsters.

If I’ve lost you with that one, just click away; this isn’t the blog for you.

The so-called congregation of the Fred Phelps-led Westboro Baptist Church is notorious for their hate-fueled protests against everything from gay marriage, to military funerals, to the entirety of Silicon Valley. God hates fags—and their smartphones, or something.

As it turns out, God also hates Dave Grohl and the Foo Fighters. (I, too, was expecting Him to come out against Nickelback, but the Lord works in mysterious ways. Who are we to question?) Westboro turned out to protest the Foo Fighters’ Friday night gig in Kansas City, and ended up getting Rick-Rolled* by a pickup full of sign-waving Foo.

This wasn’t the first time Dave Grohl and his bandmates have taken it to the streets against Westboro. In 2011, the WBC protested another Foo Fighters concert in Kansas City—but the Foo Fighters (with the help of the drummer from Rise Against, because why not) were ready. Mildly NSFW:

We may disagree on presidential candidates, or Senate procedure, or the proper application of the 14th Amendment, but I think we can all agree that WBC almost always has it coming.

Have a great week, everyone. It’s time to give the haters hell.

*To “Rick-Roll” is to provides a hyperlink which is seemingly relevant to the topic at hand, but actually leads to Rick Astley’s mega-smash hit, “Never Gonna Give You Up.”

1. Is rickrolling really still a thing?

2. I wish people would stop referring to these people as a church. To me, that name implies an actual organization, something bigger than one family. These people are just one extended family; there is nobody else in their “church”. So why not just call them what they are: the Phelps family?

3. I also wish people would stop giving them the publicity they crave. If everyone would just ignore them they would go away. They only exist for attention.

4. I think buzzsawmonkey may very well be correct that they are a false flag operation, funded by sources close to the Democratic Party (in which they were long active) for the express purpose of bringing as much discredit as they can on social conservatives, churches of all kinds, and by extension all opponents of the “progressive” movement. Where else are they getting their money? The common belief that they’re funding it all with lawsuits doesn’t really stand up to scrutiny. Can anyone cite any actual cases in which they received significant awards or settlements?

To answer your first question – yes it is. It shows no sign of running out of time.

Have you not seen the Astley2016 campaign posters? This meme won’t die until the last GenX-er does. If even then.

The more people think Rick-rollin’ is dead, the more surprised they are by the link! You think no one expects the Spanish Inquisition? Well, who expects a Rick-roll? Ha!

I don’t know about “mega-hit,” it was released in the early days of MTV before music videos were a routine part of new song roll-outs, so like the other early adopters of the format, Rick’s hit got played to death on the new channel. This is what led later to the internet phenomenon: in the early days of MTV, if you kept it on as background you might hear three or four good songs in a row – but then they would hit you with Rick, like a dagger to the heart.

Fred Phelps is busy with being dead and buggered in hell and no longer leads these (insert appropriate descriptor here).

Liked the sign to “Keep it Clean.” Good sentiment for in public.

could have done w/o the speedos and hairy butt LOL

You think he should have taken off his speedos and shaved his glutes?

You were joking, right? A nekkid smooth azz is better?

I need some brain bleach.

It was clearly a shout-out to the latency of the Phelps crew.

Beautiful. Couldn’t have happened to a better group.

And to Milhouse: rickrolling is forever, according to the yoots I see and talk to…. lol

Nah, they are a family of attorneys who attack people in distress so that others will violate their civil rights and they can sue. Its how the family supplements their income:

Can you cite even one such case in which they received a significant award or settlement? For that matter, can you cite any such cases they’ve filed at all? The article you linked to is full of supposition, but cites no facts at all.

Fred Phelps’ Westboro Baptist Church was/is a piece of guerrilla street theater. The media plays into it, because it feeds their agenda of “Christians are crazy!” They love to talk about it with indignant scowls, because they (Phelps and the media) believe all Christians think like that.

Exactly. But who’s funding it? Traveling costs money, and these people don’t seem to have time for day jobs. And nobody can point to any of these lawsuits they’re supposedly funding themselves with. So they must be getting money from someone, and who do you think that might be? It stands to reason that it’s someone on the left who sees it exactly as you’ve described it: anti-Xian guerilla street theater.

The best was a couple of years ago when the Phelps clan tried to disrupt a soldier’s funeral, I think in Missouri. A group of vets on motorcycles turned out and circled them throughout, so nothing they shouted could be heard.

But I agree with Milhouse: this isn’t a church in any real sense, just the legacy of Fred Phelps, a sick and twisted hate-filled man and a life-long Democrat.

The Bigots of WBC are the shame of Kansas in general and Topeka in particular. The only good thing that can be said of these inbred churls is that they provide a measure of proof that the Bill of Rights still works.

Personally the death of Phred Phelps, leader of the Phearless Phaggot Phightin’ Phools, was one of the Good News stories of 2014. Since he was recalled to Hell by his Master there has been much, much less public nastiness from his family/church/cult.