Because what this race really needs is more tanks 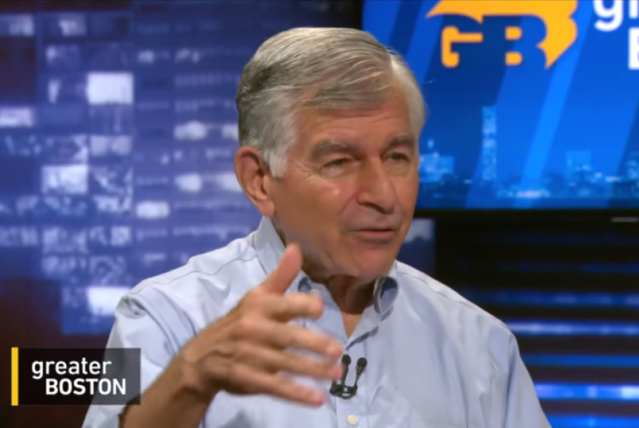 We live in an age beyond parody.

Deez Nuts and a boot-for-hat clad gentleman are (kind of) running for the highest office in the land. Gender is fluid, supposedly. That the Democratic presidential front-runner is under FBI investigation seems moot to progressive partisans. Green Day was a recent inductee to the Rock and Roll Hall of Fame, and millennials are under the impression that dressing like a lumber jack increases the potential for social acceptance.

But the icing on the cake? A grassroots effort to draft Michael Dukakis is under way.

You might remember Dukakis from his 1988 run for the White House:

Though you’re probably more likely to remember his joy ride in an M1A1 Abrams Main Battle Tank — a little ride that turned out to be one of the worst campaign snafus in modernish campaign history.

The draft Dukakis effort bleeped on our radar Friday with a newly minted Twitter account claiming their sole raison d’être was pulling the 81-year-old former Massachusetts Governor and less than successful Democratic presidential into the 2016 race.

Help us hire #NewHampshire staffers for our #grassroots #movement by supporting us at http://t.co/WUPt1Q3rxa pic.twitter.com/dIJALK8TmX

#JoeBiden's record on jobs pales in comparison to Mike's #MassachusettsMiracle. Let's get him in the Democratic Primary.

Mike won 69% of the vote in reelection to his third term. We need a candidate with popular support #Dukakis2016 pic.twitter.com/JfRipEqfrm

Currently, the site Dukakis2016.com links back to a Zazzle store where hashtag-bearing baseball caps are available for purchase.

Is this a marketing stunt to sell hats to the still faithful Dukakisites or an ernest draft effort? Our curiosity got the better of us so we had to ask.

According to MS (initials used on press request response), the Draft Dukakis campaign is “an actual organization – albeit a small one.” Their grand desire? “To draft Mike into the race.”

“We think that voters are hungry for a serious, experienced, and policy-minded candidate who is neither an ideologue nor untrustworthy – like the current Democratic frontrunner. Mike’s record in Massachusetts speaks for itself, and it’s speaking to primary voters, too, from whom we are receiving an outpouring of support…particularly in NH,” said MS making the case.

“We are optimistic that we can get Governor Dukakis in the race; if he declares, we look forward to rallying supporters and helping get his name on the ballot.” Former Governor Dukakis is currently 81-years-old. Would that be problematic to competent leadership? Draft Dukakis says no. “We are actively fundraising and building a network of support for Mike, too, and do not think that his wisdom and experience from his many years in public office will hinder his ability to Govern.”

Predating the Clinton regime, Dukakis would be the ultimate throwback candidate. But given the rest of the Democratic presidential primary contenders, he’d make a nice addition.

That’s it! More tanking candidates! You guys crack up up.

As Bob Hope used to say, “Tanks for the memories…”

With Tanking Hillary and Tanking Lizzie……

“Tanks for the gumball Mickey”

The Dems still insist the GOP is “the party of old white guys.” Seriously.

Isn’t there somebody else they can think of? It could be serious – just to have a name. The reasons cannot be as stated. They would obviously be avoiding everyone else who has been mentioned. But the Democratic Party seems to have adopted Reagan’s 11th Commandment.

It could be serious and a joke at the same time. It might even be something to encourage somebody else besides Biden and Sanders to run. Dukakis indicates dissatisfaction with the choices.

If they were half serious: What about Evelyn Murphy or somebody else somebody remembers from Massachusetts politics? She’s only 75 years old, the same age as Julian Bond was. If he was still around they could try drafting him, like somebody did for Vice President, in 1968, when he was too young.

Drudge is reporting that Hillary “already has the votes.” I recall hearing that one, oh, about eight years ago.

I am sure every one of the Republican potential candidates would love to have Hillary as an opponent, just as I am also sure the Democrats are loudly rooting for Trump, especially over at Breitbart and The Gateway Pundit.

My guess is that neither will be their party’s nominee, because it is too soon.

Just saw this. I support this nomination:

But only if he wears heels.

…and runs in to the strains of The Kinks “Lola”.

They could draft Mayor Daley out of Chicago. I’m sure he’s been actively voting in all the last elections since he died.

A word on the “Massachusetts Miracle” from a former resident.

Dukakis’s first term was a bust. He promised to cut taxes but lied and couldn’t even win his party’s renomination. A rather crude and oddball democrat budget hawk named Edward King defeated him.

Dukakis came back to win a non-sequential second term. During this time Ronald Reagan was pumping billions into the tech defense sector and one of the largest beneficiaries was Massachusetts and the “128 corridor” surrounding Boston. So the “Massachusett’s Miracle” was actually a direct product of Ronald Reagan. Dukakis obviously took credit for this windfall but as most liberals really had little idea of how an economy functioned.

We had a joke at the time in Boston. Dukakis is approached by a team of advisors who tell him about their idea for how to boost the economy. They report that they’ve tested the idea out in a small community and the results were excellent. Dukakis responds, “well, that’s fine, but does it work in theory?”

Because what this race really needs is more tanks

Well, it would be a welcome break from email servers.

Goldwater is dead. On the other hand, Jimmy Carter still has a term left and so does Poppy Bush. With Dukakis, they could have a three way fight for the Dem nomination.

“Goldwater is dead.”
As if that matters?
I won’t be surprised if Dems start circulating draft petitions for “FDR 2016! He’s progressive! He’s battle tested!

At least he has the dignity to be quiet, but there is always Gov Dean.