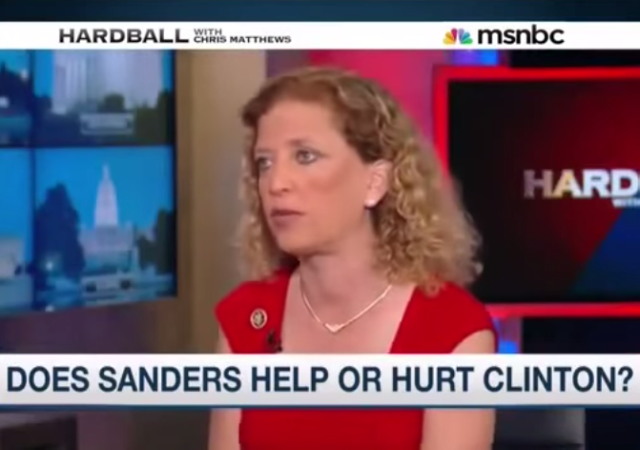 DNC chair Debbie Wasserman Schultz appeared on Hardball with Chris Matthews this week and to Matthews’ credit, he asked her a tough question.

First, the two were discussing Bernie Sanders and the role he should play in the next Democratic National Convention. Then Matthews asked Schultz to explain the difference between a Democrat and a Socialist and things got very interesting.

Matthews asked Wasserman-Schultz if, even if he loses, Sanders would have a place at the DNC convention, seeing as how he’s really popular with the base and could fire up a Democratic audience before the election.

She said he should get to speak, but Matthews kept prodding away to see if he would be allowed to speak in primetime instead of “when nobody’s watching.”

Wasserman-Schultz talked up his “progressive populist message” that people like, when Matthews asked her point-blank, “What’s the difference between a Democrat and a socialist? I used to think there was a big difference. What do you think it is?”

Wasserman-Schultz ducked the question, but Matthews pressed her and said, “You’re the chairman of the Democratic Party. Tell me what’s the difference between you and a socialist.”

Isn’t it strange that she couldn’t give a straight answer?

Matthews’ line of questioning makes sense in the context of his career. Long before he joined the media, he worked for House Speaker Tip O’Neill who probably wouldn’t recognize his own party were he still with us today.

Isn’t it strange that she couldn’t give a straight answer?

Debbie was promised there would be no math questions.

This is an open admission by Debbie Wassaman that they’re the COMMUNIST PARTY in the U.S.A…..

Debbie Deer-in-the-Headlights getting asked a simple question by CHRIS MATTHEWS and she freezes. Let’s look at a couple of factoids:

1. Barack Hussein Obama, born into Communist sympathizing family and educated by Communists demonstrates a Maoist cult of personality.
2. Hillary Rodham Clinton, when in charge of her husband’s Single Payer Healthcare program demonstrated a Stalinist tendency to create large bureaucracies.
3. Bernard ‘Bernie’ Sanders is a self-proclaimed Socialist
4. Since Woodrow Wilson’s administration, the Democrat Political Party has implemented Socialist programs. Franklin Delano Roosevelt imposed draconian Socialist programs that did nothing but exacerbate the economic situation and resulted in the Great Depression.

There is zero difference between a Democrat and a Socialist except in the way they spell ‘Democrat’.

Sanders isn’t, and Wilson wasn’t, capable of genocide against their own people.

And sociopath Clinton is capable of anything.

You missed one – FDR interned thousands of Japanese Americans unlawfully (even after an intelligence assessment reported that they presented no threat to US security). The Democrats have the dishonor to count among their own the only American president to ever imprison a large number of Americans because of their race, and held them with neither cause nor any judicial process.

Point to you! If I understand history, it was Warren Burger, then Governor of Kally-forn-yah who issued the order for that State I seem to recall another event where the self-same Warren Burger, then Chief Justice, had a minor role. For some reason, the event escapes me.

No, it was not Warren Burger, who held no public office at the time. Nor was it Earl Warren, who was Attorney General of California, and thus not in any position to make such an order. The military zones were declared by General DeWitt, commander of the Fourth Army and Western Defense Command. The defense of the west coast was his responsibility, and he believed that the exclusion (not internment) of Americans of Japanese descent was necessary for that defense. The president was not about to second-guess him.

1. It was not unlawful. The Supreme Court said so, and that ends the matter.

2. They were no imprisoned. They were free to go anywhere they liked outside the three states that were expected to be invasion zones.

3. Just because “an intelligence assessment” said something doesn’t mean he was bound to accept that judgment. If he’d refused to authorize the military to declare these exclusion zones, and there had been sabotage by Americans of Japanese descent, he would certainly have taken the blame, and would have gone down in history as the incompetent who allowed a fifth column to operate because he was too concerned about civil liberties.

The Supreme Court said so, and that ends the matter.

Korematsu v. United States decided that the exclusion orders were constitutional, but didn’t consider the legality of “other orders requiring persons of Japanese ancestry to report to assembly centers and providing for the detention of such persons in assembly and relocation centers”.

Ex parte Mitsuye Endo, handed down the same day as Korematsu, decided that the government could not detain or incarcerate citizens without charge.

Talk about one picture worth a thousand words…

One picture of Debbie is worth a thousand gag reflexes

I would liked to have seen Bernie Sanders debate them and demonstrate that there is no difference, but he’s too busy appealing to the Democrat base on the campaign trail to be bothered with obscure cable talk shows. To be fair, the Marxists that dominate the far left of the party are just settling for a socialist like Bernie at this point.

It isn’t nice to expose the mentally handicapped to public ridicule.

Laughed my a** off. What irony that the sword was in the hands of Matthews. A clip for the ages.

Question: What’s the difference between a Socialist and a Fascist?

Answer: Socialists are the members of one party and view everyone else as Fascists, most especially members of other socialist groups.

Examples, two inclusive parts:
A. Old example: Country they live in, eg.) USSR and Germany or USSR vs. any other country.
B. Current example: Democrat Party of the USA vs everyone else

Oh, and, Aleister, Tip O’Neil would be right at home in today’s Deemocrat party.

He was a lying, cheating, personal-destruction artist of the current stamp. In fact, he was their figurative daddy.

You think maybe Chris hears the hoof beats and is trying to save his job?

Asking someone questions that has to grab a ‘live wire’ to set their hairstyle for the day, could be dangerous chrissy. Be tickled she didn’t touch you.

The only difference is that today’s Democrats are only now perfecting the use of anarchy and violence to create their Utopia.

Matthews had an agenda in asking her that question. When she was stumbling over herself he asked “Because I think there used to be a big difference…what do you think it is?” Then a few seconds later he said “I think there’s a huge difference.”

He wants to offer the Dems talking points to deflect the criticism. He isn’t being a journalist here, any more than he ever is. Expect him to answer his own question eventually, and it will surely be favorable to the Dems.

Quite right. The apologists always over-define socialism by using the more totalitarian forms. But total control is always the goal, the difference in methods is whether they grab total power at once or work toward it incrementally.

Similarly, “democratic socialism” is merely a stage on the way to totalitarianism. Witness the last 30 years in Western Europe and the UK. The welfare states were held together by the artificial device of the EU, but it can only last as long as Germans are willing to pay the bills.

Matthews was offering her a chance to differentiate between the two, but she was unable to take advantage of it. He was trying to help the DNC head.

Inadvertantly, Matthews has helped the GOP by providing a question that ought to be asked of every Democrat in front of a mic or TV camera at every opportunity: what is the difference between a Democrat and a socialist? There are no Democrats who can answer this.

Hopefully it evolves to where the two terms become synonymous, interchangeable. Then start asking what’s the difference between a socialist and a communist.

Or, as we say in logic, “A distinction without a difference”.

But DO remember…Obama is a fascist more than he’s any other form of Collectivist.

But he’s a Collectivist first, last, and always. All the “-isms” are just cousins in the same totalitarian family.

I’ll repost it and you can hit it again (wink, and thanks):

Matthews was offering her a chance to differentiate between the two, but she was unable to take advantage of it. He was trying to help the DNC head.

Inadvertantly, Matthews has helped the GOP by providing a question that ought to be asked of every Democrat in front of a mic or TV camera at every opportunity: what is the difference between a Democrat and a socialist? There are no Democrats who can answer this.

Hopefully it evolves to where the two terms become synonymous, interchangeable. Then start asking what’s the difference between a socialist and a communist.

“I’ll repost it and you can hit it again (wink, and thanks):”

One of the DNC’s best & brightest in action!

And Debbie’s right up there, too.

Gah. Loathe them both BUT when did it become acceptable for the host to continually interrupt his guest? I wanted to reach through the screen and put my hand over his mouth. I was expecting a pretty stupid response given the interviewee, but I actually wanted to hear what she had to say. This whole TV format is useless. The interviewer is there to score points, and the interviewee simply mindlessly regurgitates canned talking points. Our political system has collapsed into utter stupidity. Gah.

Haven’t you seen O’Reilly? he does it all the time.

Yes, he does, and it’s one reason I have no time for him at all.

Don’t be too hard on her. Imagine if he asked John Boehner or Mitch McConnell what the difference between a Democrat and Republican was.

You have won the internet for today with this post.

The real question is what is the difference between democrats, socialists, and Marxists?

I love this story.