Under the guise of monitoring traffic flow, DeBlasio attempted to pass legislation that would’ve limited the number of Uber vehicles allowed in the city. Failing to whip the requisite number of votes to pass the measure, DeBlasio and the cab cartels were defeated and Uber reigned victorious.

That victory was short-lived.

NYC’s elected officials and the cities cab cartels are once again trying to stifle the ride-share economy. This time, DeBlasio and crew are targeting Uber’s pricing.

Administration officials are studying how to curb the price of a fare Uber can charge during peak hours, prevent livery drivers from dropping non-Uber customers for Uber rides, and help taxis develop their own app to make hailing a cab easier, say sources familiar with City Hall.

City Hall officials tacitly support one proposal introduced months ago by Councilman David Greenfield (D-Brooklyn) that would restrict surge pricing to 100 percent of the base fare, according to sources, but they are examining how high to set the cap and how to enforce the measure.

That it’s 2015 and the NYC cab cartel doesn’t have an effective cab-hailing app is no one’s fault but their own. It’s also perfectly illustrative of how the free market responds to innovative technology.

Uber, Lyft, and other’s have been utilizing mobile driven ride-share technology for years, and NYC cabbies need help making an app that undoubtedly will accomplish the same only less efficiently? Cry me a river.

Uber says the restrictions would dig into driver profits.

Uber spokeswoman Alix Anfang said the company opposes any move that would cut down on profits drivers receive during times when they are most needed.

“Uber provides thousands of NYC driver-partners with better economic opportunities and the flexibility to be their own boss,” she said. “Uber is against any bill that threatens the progress driver-partners — predominantly from the outer boroughs — are able to enjoy.”

Pro-taxi advocates have more confidence in a price-capping measure than they did in the vehicle licensing bill that failed.

“The surge-pricing bill, unlike the car cap, was pro-consumer, Uber users heavily support it, and there was strong council support,” said one pro-taxi consultant. “De Blasio dropped the ball on this and should have figured out how to enforce the bill and then signed the bill into law a while ago. It was a big fumble on the administration’s part.”

Council Transportation Committee Chairman Ydanis Rodriguez was confident a surge-pricing bill would pass once lawmakers and the mayor start talking.

“We will come out with a number that we both agree on,” he said. “For me, it’s the number Greenfield can put on the table and get the support of stakeholders to get an agreement on surge pricing that will be established for everyone to follow.”

Uber and other ride-share companies continue to grow in popularity, particularly among business travelers. Wired looked at how the ride-share economy is cutting into the taxi and rental car markets. 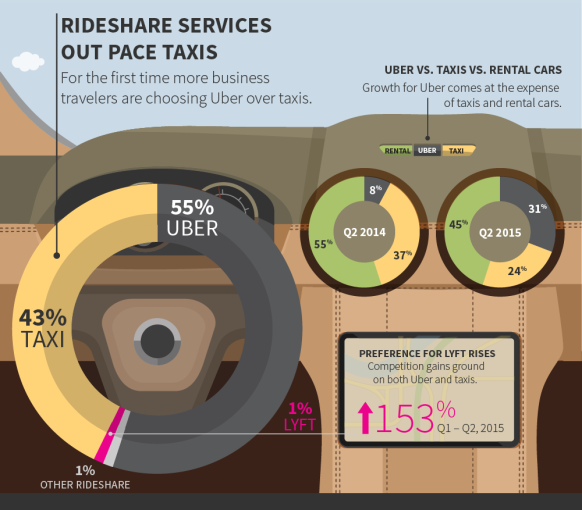 … expense software company Certify released its lastest data on how business travelers are spending money. Their report found that for the first time, travelers used Uber more than traditional taxis. Uber accounted for 55 percent of ground transportation receipts submitted by employees versus 43 percent for taxis. (About 1 percent of receipts were for Lyft rides and another 1 percent for other ride-hailing services.) That’s a reversal from last quarter, when Uber had 46 percent of the receipts versus 53 percent for taxis.

The spike in Uber use is also taking a chunk out of the rental car business, according to the report. In the second quarter of 2014, 55 percent of people rented a car while traveling on business; that figure dropped by 10 percent during the same period this year. The receipts don’t lie, Certify says: “Uber is fast evolving to become the preferred choice of business travelers for ground transportation.”

Companies like Uber provide creative solutions for consumers, unique opportunities for employees, and are continually rewarded with backlash from lazy, government-supported industries who refuse to make necessary improvements to keep up with market demands.

Comrade De Blasio will try to destroy anything market oriented. It’s the nature of a Marxist.

This is tantamount to an ordinance mandating that NYC restaurants cannot price meals above lunch pricing.

Because pricing controls have been so beneficial for the New York housing market.

The idea, clearly, is to regulate Uber until it is unable to compete with the taxi lobby that contributes heavily to the mayor.

You may remember that among his first acts in office was to try to ban the horse carriages so that a political supporter could get the land where the stable is.

I wouldn’t mind the smug and supercilious sense of moral superiority the left displays, if there were a shred of reason for it.

To quote Tim Cavanaugh at City Journal: “Uber’s very existence is an advertisement for the free market. It’s an obviously less-regulated initiative that has produced measurable, positive outcomes across a wide spectrum. No wonder people hate it so much.”

Or as the Instapundit would say, there’s insufficient opportunities for graft.

Uber, Lyft, and other’s have been utilizing mobile driven ride-share technology for years, and NYC cabbies need help making an app that undoubtedly will accomplish the same only less efficiently?

And I might add will be more expensive to develop and take years of work from union labor, then will need approval by multiple levels of the taxi bureaucracy followed by approval of the NY City Council.

And I might add will be more expensive to develop and take years of work from union labor, then will need approval by multiple levels of the taxi bureaucracy followed by approval of the NY City Council.

At which point it will work about as well as Oregon’s Obamacare exchange.

This is a wonderful millenium kick in the ass, and it will backfire beautifully.

I wonder if DeBlasio and friends realize that at least some of the rise in popularity of Uber is a direct result of their attempts to quash it?

I’m more of a traditional cab kind of guy, I’d have never considered Uber in the past…I’d heard people talk about it, but it just seemed kind of shady to me…but with all the bleating about it, I know much more about how the service works now than I would have bothered to find out on my own and it’s beginning to look like an attractive alternative.

Thanks Bill, I’d have never even considered it if it hadn’t been for you.

Wait till Uber moves into trucking.

Kind of been there for decades, Hawkins. Not, perhaps with the jazzy algorithms, but there have been “load boards” by freight agents for a long time.

And that was last time I was in the business. It might be a lot more sophisticated now.

After trucking, Uber will move to airlines. I’ve got my little crate ready to go.

You’d only need the crate for Fed-Ex.

Your normal cage will work for UPS, and the proper postage on your forehead will suffice for the USPS.