“There is a war on faith in America today” 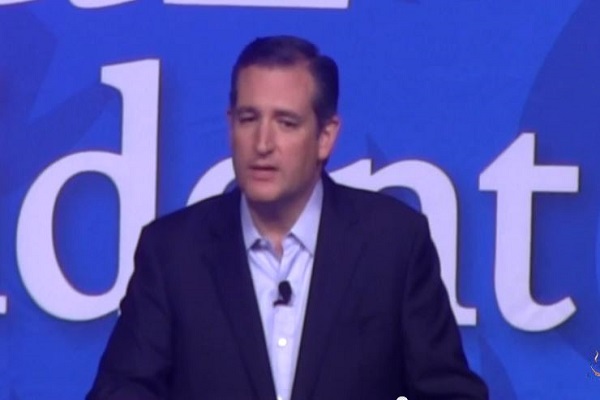 Yesterday, Ted Cruz was keynote speaker of the Iowa Rally for Religious Liberty, and while some news outlets are portraying the event as an “evangelical” pitch to the “religious right,” Cruz explains that there is a war on faith in America.

Cruz spoke about his experience defending freedom of religion at the Supreme Court and what he said were the threats facing religious liberty.

“These threats are not imagined, they’re not made up. These are real people leading real lives who found themselves facing persecution simply for living out their faith. There is a war on faith in America today.”

The event featured guest speakers who had faced consequences of upholding their religious beliefs, from losing a job to vandalism to losing a business.

“They didn’t ask for confrontation and the government came to them and said, ‘Choose between faith and obedience to government power,’ and they said, ‘I follow a higher power and that is God almighty,'” Cruz said.

Watch Cruz’s keynote speech at the Rally for Religious Liberty:

Cruz’s stand for religious liberty was also the topic of his discussion at the Iowa State Fair this week with Juno actress Ellen Page.  The Washington Post reports:

Sen. Ted Cruz and actress Ellen Page had an animated back-and-forth about gay rights at the Iowa State Fair on Friday.

Page asked Cruz, who was standing behind a grill full of pork chops, about LGBT people who are “being fired for just strictly being gay or trans.” The question kicked off a nearly five-minute exchange between the actress and the presidential candidate, who did not appear to recognize Page.

“We’re seeing Bible-believing Christians being persecuted for living according to their faith,” Cruz said. The Texas Republican, who is courting the vote of conservatives and evangelical Christians, is holding a rally for religious liberty here Friday night.

“For discriminating against LGBT people,” Page shot back. The encounter was filmed by ABC News.

“No, for living according to their faith,” Cruz, holding a pork chop in one hand, responded.

While Page seems to think that the bakers refusing to bake cakes for gay weddings will not cater at all to members of the LGBT community, she’s incorrect.  They simply don’t want to be forced to take part in a religious ceremony that counters their own religious beliefs.

The Colorado Christian baker who was ordered to make wedding cakes for gay marriages is still serving anyone who comes in his door, but he has stopped making wedding cakes altogether.  He has also reported that he’s received support from a number of people from the LBGT community.

“The other day a guy from Daytona Beach called and left a message. He said he’s gay and he wanted to offer his support, and gave me his phone number to call him back,” Phillips said.

“So that’s one, but there’s dozens or hundreds of gays who say they think this is just not right [and is] politically motivated mostly. ‘You have the right to turn us down and these people are making us all look like we’re terrorists. … But we’re not, we just want to live our lives.'”

The baker was found guilty of discrimination after he turned down a request for a wedding cake from a same-sex couple in a 2012 incident.

Because of that, Phillips’ Masterpiece Cakeshop no longer makes wedding cakes of any kind, with the owner noting that he cannot violate his religious beliefs on the issue, which hold that marriage is between a man and a woman.

“The judge said that even though I welcomed them and told them I would sell them any other product, that because I turned down this one, I had violated the [anti-] discrimination law. And that I didn’t sell it to them because they were homosexuals rather than because the event, participating in that, violated my faith,” Phillips explained in his own words.

Cruz makes the distinction between discrimination (refusing to serve anything to any member of the LGBT community) and protecting religious liberty (refusing to take part in a religious ceremony that violates one’s own religious beliefs).  It’s a distinction that needs to be made.  Often.

In this so-called democracy, a Christian stance of a belief in God and absolute truth, must unconditionally take a stand against the inordinate affections of mankind.

LGBT narcissism, like Marxism, must not be encouraged-both are all consuming.

I call it LGBT fascism, myself.

But, we are not a democracy (rule of men); we are a republic (rule of law) … on paper anyway.

Good job by Ted. Too bad he’s not a natural-born citizen.

Atually, he is. “Natural born” status is determined by federal statute. When Mr. Cruz was born, the statute was that the citizen parent had to have a total of 10 years physically present in the US, 5 of which had to be after age 14. His mother was born in Delaware and was in the US for her first 21 years at least, so she qualifies to be a “transmitting Parent”, therefore, Mr Cruz is indeed a natural born citizen. It doesn’t matter that he was born in Canada.

I give great thanks for a fine inspirational conservative like Ted Cruz. He will make a wonderful President although I admit, my fondest wish is that he eventually becomes Chief Justice of the SCOTUS.

With Walker sadly waffling himself back into RINOland on immigration, Cruz becomes even more critical.
http://www.breitbart.com/video/2015/08/21/walker-not-taking-a-position-on-birthright-citizenship-need-to-talk-border-security-first/

I’m not too big on Carson; he has some things he seems to be less than conservative on – then catches himself and corrects himself to say the “correct” thing.

But Cruz is the man! I truly believe he is the best, most consistent and trustworthy conservative in the running.

Lord willing, he will be our next president. Or, if Trump does manage somehow to be the nominee, that Ted will be VP.

I think the “RINO” tag is given all too quickly and easily. Are those on the right as intolerant as the left? Scott Walker is my Governor and he’s a good Christian man. Because he dares to “waffle” on a very complicated issue he is suddenly a RINO? That’s just foolish.

It’s not complicated: our current unemployment, underemployment, and workforce participation rates show that there is no labor shortage of any kind in this country. Therefore, any immigration policy based on that is a lie.

So far, I’m disappointed with all of the candidates.

There is an attack on Religion in America today. The biggest attack is on the Judeo-Christian Religion. It is not hard to figure out which competitor is doing it. This Gov., in the past has been the least intrusive into Religion of any Country. This push for bigger Gov. and trying to have Gov. be all things to all people, Must stop.

When I was a kid (back in the 1940’s) everybody went to church. And, cities (large and small) had “blue laws.” Forbidding retail shops to be open on Sundays.

Then? Malls got built outside the cities (large and small). At crossroads easy to reach by car. The station wagons rolled off the assembly lines in Detroit. (I think gas was 25-cents a gallon. Plus, an attendant filled your tank. And, you got free dishes. Green ones.)

The change was almost overnight. Instead of church, people went shopping.

Yes. They went shopping, because once the blue laws were repealed and they had a choice, many decided shopping was their preferred activity.

Others, with the same choice, still attended services.

Ellen Page, being as she is a Canadian, needs to be firmly told to butt out. Let her go be stupid in her own country.