Calais overrun by migrants and strikers

Calais overrun by migrants and strikers 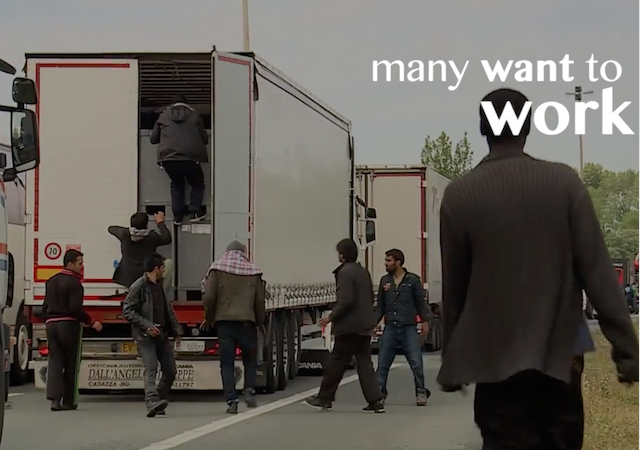 While American activists languished in the debris of their Cecil the Lion meltdown/manhunt, people in Calais have been dealing with a perfect storm of union strikes, stampeding migrants, and a resulting travel standstill.

Much has been made of the inconvenience to Brits attempting to cross the English Channel for a summer holiday, but the French city of Calais is truly in a crisis. Over the past week, thousands of migrants have flooded secure areas surrounding the Eurotunnel terminal in an attempt to enter the United Kingdom. At least 9 people have died during the attempt since June, and the very crush of those attempting to get close to access points has caused a dangerous and volatile situation in the city.

The migrants, coming mostly from Syria, Eritrea, Somalia and Afghanistan, are fighting to get across the channel and into the UK for a variety of reasons—many are seeking jobs, or asylum—but all who come do so because it is statistically easier to remain legally in the UK than it is in France.

More from the Daily Mail:

Some 200 have succeeding in making it to Britain in the last four nights. However, a dozen immigrants were found stashed in the back of a beer truck on the M20 near Ashford yesterday afternoon while groups were also held across Kent, Sussex and even at M25 services.

Three men were seen slashing a hole in the canvas side of a lorry and running away in Stourbridge, West Midlands. One even risked his life by hiding under a horsebox for two hours.

There have been more than 4,200 attempts by migrants to enter the Tunnel in the past four nights and one was killed after hundreds stormed the barriers on Tuesday night.

The huge delays have led to hundreds of lorries queuing up on the closed M20 as part of Operation Stack – which is causing widespread travel disruption in Kent.

Adding to the chaos is the creative picketing of France’s ferry workers, who went on strike after facing job cuts. As part of their protest, the workers blocked off roads heading into the port in Calais with piles of burning tires. A source for the Daily Mail flew a drone over the roadblock, and the resulting footage is pretty wild:

According to officials in both France and the UK, those migrants who have reached Calais are likely to have spent up to 18 months fleeing humanitarian crisis situations in their homelands, and are thus much less likely to cooperate with authorities attempting to curb illegal channel crossings. There is concern that an uptick in the presence of law enforcement could contribute to the volatile and increasingly dangerous situation on the ground, but the governments of both countries have stepped up efforts to bolster both infrastructure and security forces.

We’ll keep you updated on the situation.

The BBC has curated a series of photographs documenting the chaos in Calais. You can see them here.

It’s pure chaos over there. Coverage from the Express and the Telegraph is a little more blunt than the BBC, I recommend having a look.

As someone over at Insty quipped, “and you thought The Camp of the Saints was meant to be fiction…”

UK is paying the price for becoming a sanctuary country.

And for its overly-generous welfare system.

Are they serious about that last part? It almost sounds like they want to give them more “space to destroy” as way to “deescalate” the situation.

The Islamic invasion of Britain continues.

What a wonderful/terrible demonstration of how powerful markets can be, and how discerning people can be when given choices!

Refugees are not satisfied to be where they are not in physical danger and want any longer. They NOW have the ability and the strength to “shop” the best deal among several possible hosts.