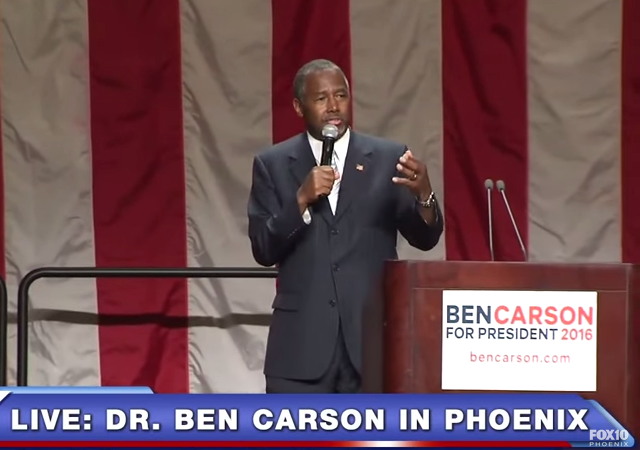 Dr. Ben Carson gave a speech Tuesday night to a crowd of 12,000 people at the Phoenix Convention Center. Carson was scheduled to speak at a smaller venue but the event was moved due to high demand. The Right Scoop notes that Carson drew a larger crowd than Donald Trump had at a recent event in the same city.

The full speech is at the bottom of this post. It’s forty minutes long and you should watch the whole thing but if you’re pressed for time, here’s a short report from FOX News in Phoenix:

Carson touches on all the major issues of domestic and foreign policy but gets his biggest applause breaks when he talks about shrinking the size of government, fair taxation, immigration, healthcare, reducing America’s debt, improving national security, and his faith in God.

He takes the political fight to Obama, Hillary Clinton, Bernie Sanders and boy does he sock it to the media. In fact, if you watch nothing else, skip to the 15 minute mark and listen to Carson explain why the media isn’t supposed to take sides in American politics.

In the same segment, he addresses Planned Parenthood and the fake controversy over his use of fetal tissue in scientific studies by reminding the enthusiastic crowd that pediatric neurosurgeons often come into contact with such tissue by virtue of their work.

Matthew Boyle of Breitbart says Carson is “at the top of his game here” and I couldn’t agree more. This is truly worth watching in full.

Ben Carson quietly rises in polls amid frenzy over Trump

As the media continues to swarm over Trump, retired neurosurgeon Ben Carson has quietly risen to the top tier of the crowded Republican presidential lineup, which features 18 candidates.

Yet while Trump has surged to the top of the pack with a brash, outspoken manner that can more closely resemble insult comedy rather than traditional politics, the appeal of the quiet, understated Carson is rooted in his calm bedside manner and earnest religious faith.

A strong finish to an otherwise subdued performance in the first Republican debate has been credited with reawakening interest in Carson, who saw the largest post-debate gain in a national Fox News survey released over the weekend. The poll found that while Trump was still strongly ahead with 25%, Carson had shot up five points and into second place with 12%.

You can see the findings of the FOX News poll referenced above right here.

If Carson continues to give speeches like the one he gave in Phoenix, expect those numbers to keep going up.

I look forward to Dr. Carson being a very able Secretary of Health and Human Services in the first term of the Walker administration.

Pablo, that is what I think as well. I would love a Walker-Fiorina ticket with Carson as Sec of Health and Human Services. And Cruz as Senate Majority Leader (keeping Rubio and Paul where they are and can do the most good).

We have a spectacular Rep field, even after sending home the RINOs (which is the vast majority of the 17: Perry, Bush, Kasich, Christie, Graham, Gilmore, Pataki, Huckabee). I am still out on Trump, who is a great candidate, getting things talked about, but I sincerely hope he does not win – or go 3rd party. Not sure about Santorum either….

I agree… But under a President Trump. I want a manger/problem solver who is not politically correct but plain spoken. I don’t care about style but care about getting the job done. In short, Trump is exactly what this country needs in order to reverse the damage that has been caused by the two terms of the little poser puppet emperorship…

I like Trump, for the reasons you mentioned, GrumpyOne – he is a good manager/problem solver who knows how to find COMPETENT assistants. Plus, he has come back from bankruptcy a few times. Someone said “Well, I could too if I didn’t have to pay back my creditors” when I mentioned that. But he had to convince investors to lend to him again after that bankruptcy, which is a skill in itself. So, I guess, I am not totally opposed to a President Trump… I just do not know if I can trust who he says he is governance wise.

I read that Hillary’s last event had about 300 attending. Most of them were FBI agents, I hear.

I think that Trump is the kind of Leadership that the Country needs. Some strong Leader is needed to overcome the damage the Socialist/Marxist/Communist group now in charge has done. Trump has saved hundreds of companies. There are always some that can’t be saved. He has never filed personal B.R. There are several other good candidates. The ” Herd,” needs to be thinned more before anyone can be chosen. There is still plenty of time. I have said for two or more years, That the Demos. will bring in Eliz. Warren at the last min. if Hillary Fades. The other thing is providing that Obama actually Leaves.

He started slow, but really warmed up throughout that speech, a metaphor for his campaign perhaps. Thanks for sharing this.