The relentless war on Clarence Thomas

The effort by liberal media to delegitimize Clarence Thomas as a powerful legal scholar is not new.

From his confirmation hearings through to the present, Thomas has endured relentless denigration of his intellect in places like The NY Times.

NYT Supreme Court reporter Adam Liptak has an article focusing on the frequency of Thomas using language in his writing similar to briefs submitted by parties, amicus briefs, and lower court opinions, Clarence Thomas, a Supreme Court Justice of Few Words, Some Not His Own. 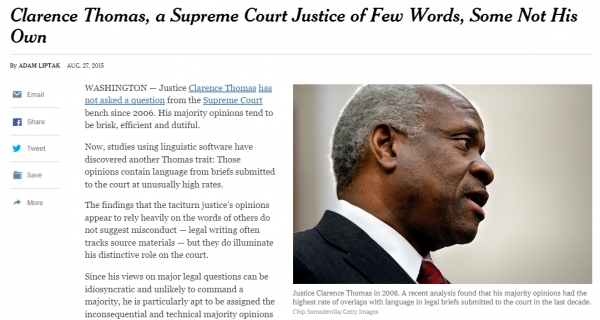 Someone casually reading the headline would suspect Thomas of plagiarism (in spirit, if not technically) and being unique among the Justices. The Headline matters — Thomas alone is singled out.

The opening paragraphs of the article seem damning:

Justice Clarence Thomas has not asked a question from the Supreme Court bench since 2006. His majority opinions tend to be brisk, efficient and dutiful.

It is not until you dig deeper into the article that the “unusually high rate” attributed to Thomas is not that unusual. In fact, it’s just barely higher than his nearest competitors. In fact, you have to dig down to the 15th paragraph, after lengthy trashing of Thomas suggesting he is an intellectual lightweight:

Over the years, the average rate of nearly identical language between a party’s brief and the majority opinion was 9.6 percent. Justice Thomas’s rate was 11.3 percent. Justice Sonia Sotomayor’s was 11 percent, and Justice Ruth Bader Ginsburg’s 10.5 percent. All three sometimes produce institutional prose.

Justice Elena Kagan, who has a livelier writing style than those three, had the lowest rate, at 7.1 percent; Chief Justice Roberts was in the middle, at 9.2 percent.

Got that? Thomas’s rate was just 0.3% higher than Sotomayor, and just 0.8% higher than Ginsburg — but the article is devoted to Thomas.

Byron York noted the bias in the article:

Liptak cites two other studies, both limited to 2002-2004, a very short time frame. The first study focused on language overlapping from “Amicus” (friend of the court) briefs:

A new study to be published in Law & Society Review looked at cases from 2002 to 2005 and found that Justice Thomas’s majority opinions incorporated language from friend-of-the-court briefs at 4.4. percent, more than than any other justice.

Notice how Liptak only cites the high (Thomas) and low (Stevens). Why not cite intermediate data? Because it doesn’t make Thomas look so bad. In the full pdf of the study the authors provide the data, showing Thomas the highest, but only 0.9% higher than Ginsburg: 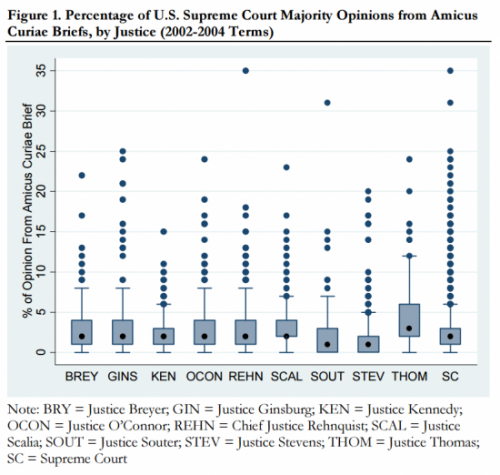 Figure 1 also reveals that there is some pronounced variation among the justices. Justice Thomas borrows most heavily from amicus briefs, with 4.4% of his majority opinions using language that appears in amicus briefs. Following Thomas, Justices Ginsburg (3.5%), Scalia (3.4%), O’Connor (3.1%), Breyer (3.1%), and Rehnquist (3.1%) make the most use of language in amicus briefs, while Kennedy (2.5%), Souter (2.1%), and Stevens (1.8%) adopt the least amount of language from amicus briefs. Looking at the outlier values, it is clear that the opinions that integrated the most language from amicus briefs are fairly evenly dispersed among the justices, with the highest percentage corresponding to Rehnquist’s opinion in Connecticut Department of Public Safety v. Doe (2003) (35%), followed by Souter in Breuer v. Jim’s Concrete (2003) (31%) and Ginsburg in Intel Corporation v. Advanced Micro Devices (2004) (25%). Notably, 21% of amicus briefs witnessed no incorporation of their language in majority opinions.

Liptak cites a third study (by the same authors as the preceding one) for that same narrow time period, focused on the overlap with wording from lower court decisions:

Once again, if you read the full pdf., Thomas is higher, but not by far: Just 0.36% higher than Rehnquist, and 0.58% higher than Stevens: 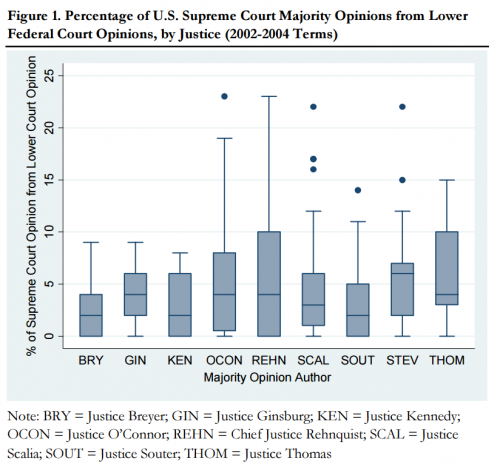 Unlike the intimations of the NY Times article, the authors in that third study attributed Thomas’s slightly higher rate to his openly discussed approach to decision writing:

Indeed, Justice Thomas is especially clear in articulating the significance of lower court opinions at the Supreme Court. Thomas explains the process by which the justices deliberate cases on the merits as follows: “We work through the case, as I read the briefs, I read what they’ve written, I read all of the cases underlying, the court of appeals, the district court. There might be something from the magistrate judge or the bankruptcy judge. You read the record” (quoted in Greenburg 2007). As Thomas makes evident, the justices do not start from scratch in their deliberation of cases. Rather, they digest the lower court opinions, litigant briefs, and amicus curiae briefs, all of which have the potential to shape the doctrinal content of the justices’ opinions.

If Liptak had focused on the more general issue of the influence of briefs and lower court decisions, while noting fully that Thomas was the highest but near others, it would have been a fair article. In fact, if you read the studies cited, none of them single out Thomas, and all are devoted to understanding the influence parties, non-parties and lower court judges have on the ultimate Supreme Court rulings.

But it would not have been worthy of the headline and focus it was given on Thomas.

The war on Clarence Thomas is sometimes obvious, sometimes subtle. Regardless, it is relentless. 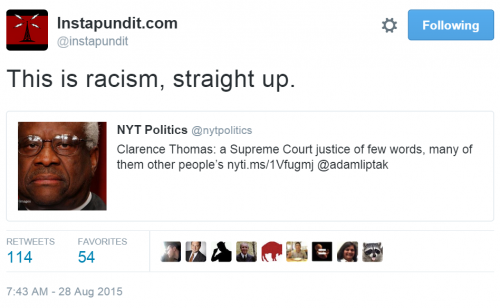 [Note: There were some minor wording changes after publication, to clarify the distinction among party briefs, amicus briefs and lower court opinions in the studies]

As usual, Instapundit nailed it.

Racism, straight up. And, as is NEVER noted by the left, it is from the Democrat-left-wing, not from Conservatives, not from Republicans.

Racism – it’s a Democrat institution and tradition, just like their hatred!

It’s a bad article, sure, but what makes it racist? Did they say that Thomas uses other people’s words because he’s black? I missed that part I guess.

As much fun as it may be to use the other side’s twisted logic against them, it’s not very honest. I see partisanship here but no discernible racism.

You need to be a bit more cynical, Irv. Use their rules, not ours. NYT’s racism implies that he is ignorant and can’t think for himself. They did this in their usual fashion – burying statistics or omitting them altogether. In other words, it was intentional, and it was directed toward a conservative black man. And they will get a pass, because liberals will rationalize, just as you did, only they will say it’s true, not that it’s a bad piece. Incidentally, the word “article” implies a factual document based on thought and research, so I won’t refer to it as an article – it’s what used to be known as yellow journalism.

An article like this, written by a conservative about a prominent black man, would be criticized for it’s “dog whistles” – unheard racism couched in “code” and indirect language, but present nevertheless.

Well, this article goes far to explain how the New York Times could publish an analysis of a draft state law, instead of the final version. (They really did this to the Arizona immigration law.) The New York Times relies on inept, unobjective lawyers to write their articles. How sad, because there are competent lawyers in this county.

Speaking strictly as a lawyer with appellate experience, the appellate courts are restricted to the issues the parties bring before them, and the record, below. The name of the game for an appellate attorney is to write a brief so powerful that the court issues a one-page order, or even better, copies large swaths of the brief, verbatim.

And, you should just hear the drafting attorneys howl about the injustice and rampant incompetence, if the opinion reframes their issues and arguments to its own liking.

I used to read idiots claiming that Thomas was an embarrassment because he never wrote.

Truth is, he’s the most prolific of the Supremes, and he’s very well regarded by his peers.

But he’s “off the plantation”, so he’s going to be beaten on like it’s 1932 by the massas of the Deemocrat Collective.

They’re both so old they’ve forgotten their A, B, Cs……

Wow, I can’t wait to see how they rip Biden, who is a plagiarizer.

As another man of few words, I’d like to point out that it’s the quality of your words, not quantity, that most often rules the day.

Teddy Kennedy still lives? Or, was this NYT article taken verbatim from one of his drunken monographs?

Teddy’s attack on Justice Thomas during the confirmation hearing was way out of bounds and showed Kennedy to be a raging racist; still, to rationlise TK’s behavior, he might have been deep in the bag those days. IIRC, Biden’s behavior was typical racist too.

Justice Thomas is a great justice, a great legal scholar, and adjudicator.

“…still, to rationlise TK’s behavior, he might have been deep in the bag those days.”

We learned what the old drunkard really thought. In vino veritas.

It’s that “old thing” that nobody hip and groovy understands, doncha know….

Wouldn’t it be much more timely in light of the speculation about Biden running to do a reminder article about his plagiarism?

Or… maybe they are getting ready for that.

Keep your powder dry lads. There will be plenty of time after Biden secures the nomination to resurrect his past.

The NYT didn’t accord Justice Thomas the “dignity” rule of law accorded to SSM by Justice Kennedy. Hmmm.

Why might Thomas use the language offered by sides in the case slightly more often than other justices? It could be that he is an ideologue who is glad to pass on whatever useful talking points have been handed to him by the side he favors, or it could be because he has humility and actually listens to and wants to give credit to soundly reasoned jurisprudence when he finds it in the work of those who come before him. The statistic itself tells us nothing about the source and implications of this (minor) difference from fellow justices. In short, the statistic is MEANINGLESS. It could mean one thing, or the opposite. To inflate this into a lengthy attack on Thomas is mendacious in the extreme.

NYT isn’t even fit to line the bottom of a bird cage.

Thomas is a brilliant jurist, and the Old Gray Whore is trying to have to last word on defining the man. This is how they plan to make Thomas’s legal ideas unacceptable to future generations who would use them to restore constitutional rule to the USA.

Maybe it shows that Thomas’s jurisprudence isn’t as fanciful as Kagan’s. Or is it supposed to be a creative-writing exercise?