Is this even America anymore? 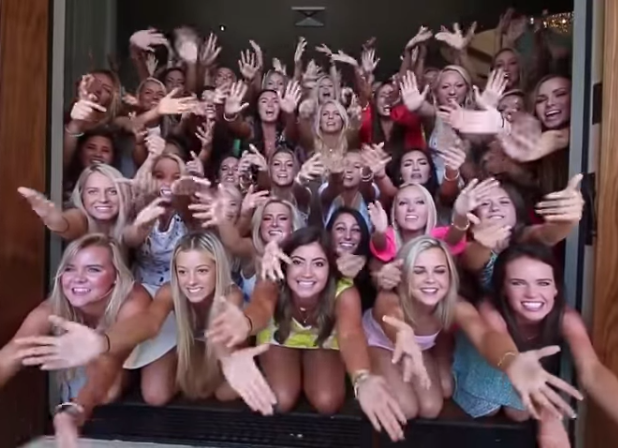 The Alpha Phi Sorority at the University of Alabama made a recruiting video which has generated a lot of controversy.

In fact, the controversy was so severe that the university administration condemned the video and the sorority ended up taking it down.

But it was saved by someone:

And the problem is?

I don’t get it. But I’m an empirical, evidence-based type person.

So I’m going to keep watching it over and over until I figure it out exactly what the problem is.

This does have some serious implications, though.

Not the video. The response. 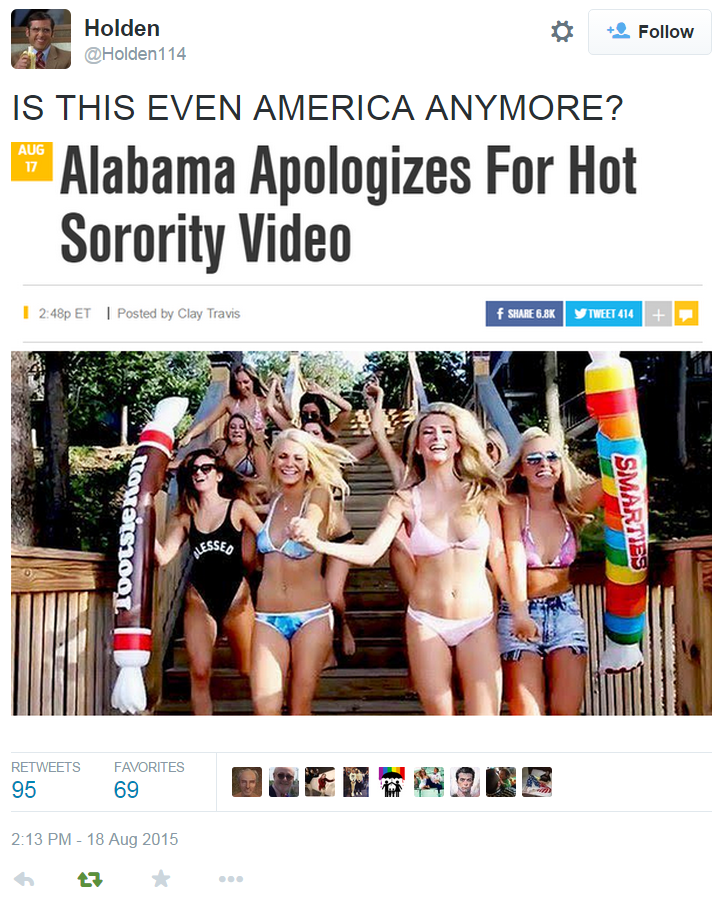 This is why PC must die. This is why The Donald is so important – if for no other reason, to destroy PC and any and all who do this to people.

PC has never been anything other than “Political Corruption.”

I watched it over and over and eventually forgot why I was watching it. Let me watch it again and see what I think about all this.

I see what you mean. O_O

I have to wonder, though, are they trying to recruit women to their sorority, or men? It looks (and sounds) like some Playboy magazine video from the late 1980s, a Girls of the Southeast Conference, or some such.

Henry, are you being a “responsible digital citizen”?

Yes, ma’am. It’s just a damning combination of being easily confused or distracted. Just to be sure, I’ll watch it one more time.

Henry, if I might, a suggestion on what to look for. After several viewings, and a lot of pauses at certain points, I have finally decided why this video is offensive.

It’s not Labor Day yet!

Serial Mom will be after you!

I actually resisted watching this when I saw the headline about it elsewhere. But once something shows up on LI, I have to watch it. You forced me.

Political correctness is our version of Sharia law.

To combat the push for political correctness perhaps they should have supplied half of that gaggle of girls black shoe polish. The photo op would have looked great with 10-15 girls wearing ‘black face’! LOL

So…. were they supposed to make a video of very butch, overweight chicks holding BDS signs?

Not gonna happen in Alabama.

This is America. Make any video you wish to make. If this is offensive, then I propose a contest to see which sorority can be most offensive.

What part of America are you worried about? Things look basically OK … particularly through binoculars.

But yes, I see a problem. Advertising 101—there’s nothing there to differentiate it from the all the other sororities. It looks like just another generic Castle Anthrax.

And they don’t have enough blondes.

Also, the split-level Ionic facade on the sorority house is a crime against the laws of man and architecture.

Does anyone know the name of the tune and the performer? Seriously, if I can ID it, I will see if it’s on iTunes. If not, I’ll just record it off the video (but prefer to pay for music that is available online. That’s the way I roll.)

“Birds of a feather, flock together.”

I watched the video, and I get the message: “We are a bunch of good-looking party girls.” So long as the girls in the video are the members, I’d say it’s not false advertising.

Now the whole country knows the name and location of the sorority whose members are so hot their harmless recruiting video got banned. Guys have an excuse to watch this video because of the alleged controversy, and the sorority will be bragging about this video for the next 30 years.

I would say it is a smashing success.

I assumed they are all members. It showed good team work. They were all in it together, and all with the same attitude. Great ad.

“We are a bunch of good-looking party girls (going nice places).”

Agreed. A clear message with plenty of illustrations.

Too long for such a simple story/message. I’d go two minutes.

It’s not amateur, but it makes you appreciate the level of directing and editing excellence that we take for granted in “Hollywood” productions.

The black football player clearly felt threatened when surrounded by a bunch of blonde sorority girls.

Also, the bathing suit with the word “Blessed” written on it probably violates the First Amendment’s guarantee of freedom from religion when used in a video for a state university sorority.

Bubbles, glitter, Popsicles, and a bit of jiggle here and there. Well, lots of jiggle. Sure beats the hell out of yet another Hillary photo, eh?

If this were an all-black sorority, the video would have been deemed “empowering” and “novel” and probably won an Oscar for “best short film”.

This is going to get banned, too, right?

Is there a video of other frats or sororities that may not be “diverse” enough?

Like, say…..Alpha Kappa Alpha? Is anyone asking for them to apologize for not being diverse enough?!

There is no double standard there, is there?! IS THERE?!

[BTW-I noticed some diversity in the Alpha Theta video – they had some girls with dark hair, not all were thin, they seemed to have some Asian-descent, some Latina, and possibly other demos – and hey, who knows if they are LBGTQ or not……?! #justsayin’ ]

Nothing personal, but “latina” and “latino” are Spanish words. In the U.S.A., we used to say “latin.”

Thanks for the English lesson.

I have taken it upon myself to watch the video repeatedly and to study it in depth. I know, I know…but it was a sacrifice I was willing to make. The only person who could be offended by that video is a moron.

Okay, I know, the problems is…wait a sec…oh yeah, the problem is that the grass is green in their sorority and isn’t there a drought or something. Why else would they be so excited about jumping in the lake.
Sound reasoning, right?

So, now I know where FOX gets it female anchors/reporters. This was not the type of sorority I would have thought about, all those decades ago, but so what? Maybe I should apologize for having blue eyes.

“It’s all so racially and aesthetically homogeneous and forced, so hyper-feminine, so reductive and objectifying, so Stepford Wives: College Edition. It’s all so … unempowering.”’ A.L. Bailey, a writer, magazine copy editor, and online editor who lives within a selfie.

(…as I write this hundreds of lesbian therapists are forcing themselves to go gaga (psychologically cogitate is the proper terminology) over the video, objectifying their thoughts of the homogeneous hyper-femininity.)

Beauty may sometimes be only skin deep. OTOH, Political Correctness isn’t skin deep. It’s not deep at all. It is surface scum: free speech working against free speech.

Political correctness is SO objectifying. It is antimony- “detrimental stereotypes and clichés”-found in the tiny identity politics underworld.

I had to watch it twice. For the articles.

I read online that all sorority recruitment videos are pretty similar to this one.

I’m not really sure if that’s true. I’m going to do lots of comparative research and get back to you.

Looks a lot like the FB pics of my niece and her sorority friends at Wharton.

Amazing to me. I’m getting really indignant about these PC morons who are thinking that things that look “too white” are problematic. My sister has been a soror for years and her group is nearly all black – no one complains. This PC double standard crap really needs to be called out on.

PC Czars declare the North Pole and the South Pole the most Racist places on Earth!

“Your skin color and hair color shock me into discomfort and anger, therefore you are racist.”