What do we know about Hillary Clinton?

What do we know about Hillary Clinton?

A surprisingly difficult question to answer 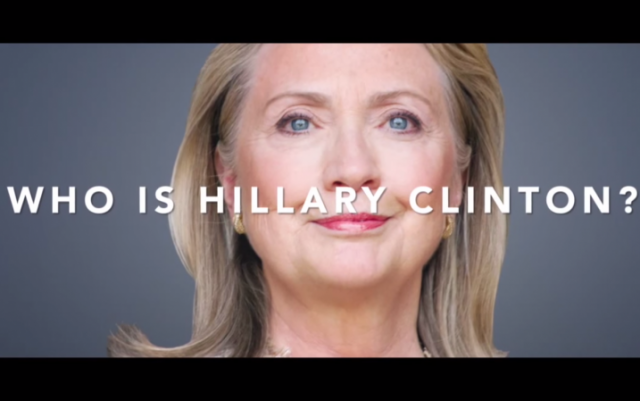 Our friends at National Review published a new video this week. The question is simple enough — Who is Hillary Clinton?

Election cycles are full of “The REAL so and so,” and “You think you know _____” oppo pieces. Sometimes positive candidate profiles manage to land underneath intentionally enticing headlines. So why is National Review’s any different? Is it any different?

Straightforward as the question of Mrs. Clinton may seem, it’s a hard one to answer.

For someone who’s spent so much time in the political spotlight, we know very little about Mrs. Clinton aside from her titles. She was Arkansas’ First Lady, then America’s. She went on to serve as a Senator and then after a failed presidential bid, Secretary of State.

But who is she?

The point I believe National Review was making, and one that should be taken seriously is that any attempt to describe Mrs. Clinton beyond political rank produces more questions than answers.

Even with so many impressive political roles under her belt, that there are few actual accomplishments to accompany the titles is peculiar.

We know she paid $2 extra for guac at Chipotle and that she has a fascinatingly morphing dialect. Mrs. Clinton stood by her man through thick and thin… several times. She used a separate email account and server while heading up America’s diplomatic relations for four years, and claims to have be an avid yogi.

We know she’s shifted views on gay marriage. As a Senator she gave an impassioned speech on traditional marriage, but as presidential candidate, sent numerous emails praising the high court’s decision.

Even more problematic is that off-the-cuff Hillary is horrendously awkward, stiff, and impersonal. See also: every single televised interview of Mrs. Clinton.

There’s always much debate about just how personable and approachable candidates should be, it’s their policies that matter most! some always argue. But when it comes to Mrs. Clinton, the void of both personality and policy chops will be a difficult obstacle to overcome.

Who is Hillary Clinton?

I don’t find that hard to answer in the least.

Without being exhaustive, the overarching defining traits are these…

3. a personality riven with a lust for money

4. a personality riven with a hunger for power

5. a personality that will allow Dollar Bill to do anything.

The problem is that as long as #1 is true, the Left will give her a pass on everything else.

What on Earth are you babbling about? We know Hillary just fine. We know that she’s a career criminal with a bad temper, an obsession with control and a tin ear for politics. We know that she dislikes Jews, the military and Bill, not necessarily in that order. She is reliably leftist in her views but is willing to pretend to be whatever she thinks it takes to get what she wants. She hates interacting with people other than her own (semi) trusted inner circle and …

Never mind. More than 20 years that vile piece of work has been on the scene and you claim we don’t know about her as a person? Maybe you should try using Google or something before writing this stuff.

You forget the failed health care commission. The one that violated sunshine laws.

Of course, her accomplishments as a day trader where she made hundreds of thousands in a few days trading.

We also know Her Inevitableness is an admirer of Saul Alinsky, was offered a job by him after her graduation from college.

We know she permitted sex toys to be placed as personal White House Christmas Tree ornaments; that WH staffers were told not to look are her or get out of her way and that she hates the military. She has a foul mouth and surrounds herself with other women.

We know she is a robotic, uncharismatic speaker who does not look at the audience but over their heads. We know she doesn’t speak any language other than English.

We know she ran the Anti-Bimbo Squad; made a trillion to one financial gain in cattle futures. We know her long time confidant Vince Foster (along with a long list of others) died under mysterious circumstances. We know Rose Law Firm records, under Congressional subpoena for two years magically appeared, with her fingerprints all over them, in the White House.

We know she and Bill made love at least once during their marriage.

Working from this information, we may conclude she is a soulless, power and money obsessed harridan who certainly doesn’t belong out of prison.

Not so hard to answer.
1. She lies like a rug.
2. She hates the military and treats them like lackeys.
3. She’s money hungry.
4. She let her ambassador die in Benghazi.
5. She covered for her husband’s abuse of women by attacking his accusers.
6. She has a massive sense of entitlement.
7. She let an innocent man languish in jail for two years rather than declare Benghazi was terrorism.
8. She is singlehandedly responsible for the caps in Libya.
9. She is a multimillionaire.
10. She demanded $265,000 to make a 10 minute speec followed by 20 minutes of question and answer and 25 minutes of picture taking.

We know Hillary has a vagina. And we know that her lips will do whatever it takes to get her whatever she wants.

What do we know?

She has cankles, and prefers black pantsuits.

Has cankles? Yes! But can she de-cleat an opponent?

What is the mystery? Hillary Clinton is a greedy, corrupt, dishonest, selfish, mildly intelligent fool, and about as qualified to be president as Barack Obama.

WHAT is the mystery?

Hillary Diane Rodham (Clinton) of [email protected] and Clinton the Musical fame is a psychotic self-centered, Eleanor Roosevelt diviner who claimed to be the un-elected co-president, claimed poverty and claimed that the little people’s lives don’t make a difference, NOW.

Who is she? One of the Borgias.

“the void of both personality and policy chops will be a difficult obstacle to overcome. ”

No it won’t because Republicans are evil and stoopid, remember?

Pathological supporters of Hillary Clinton only need to know two things: (1) she is a woman, and (2) she is a liberal. Fact #1 satisfies the “it’s our turn” rationale for voting. Fact #2 satisfies the “she’ll give priority to women’s issues, which Carly and Sarah would not, thus disqualifying them”. There is no other “need to know”.