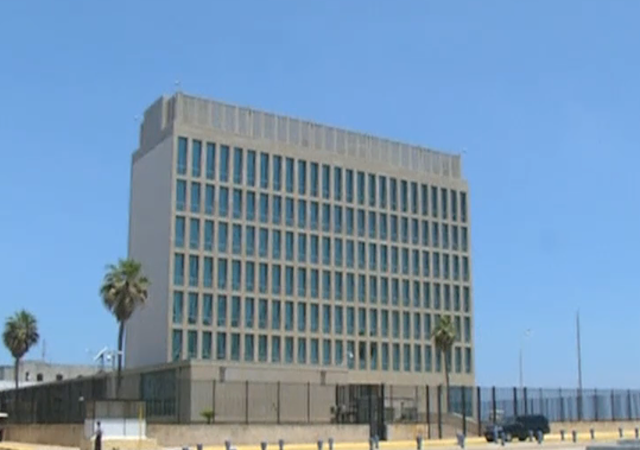 Yesterday, Cuba’s flag flew over its Washington, D.C.-based embassy for the first time in 54 years.

Relations between the U.S. and Cuba aren’t totally normalized, but yesterday’s embassy openings are being cautiously hailed as the beginning of a new era in our relationship with the struggling country. Although “formal diplomatic relations” have indeed been restored, President Obama has elected to keep in place—with minor tweaks—both business and travel restrictions, as well as the economic embargo that has defined our relationship the past half-century.

It’s halfway between a symbolic move, and full-on reversal. (Is the reversal coming? We could start a pool.)

Cuban Foreign Minister Bruno Rodriguez presided over the reinauguration of the embassy, a milestone in the diplomatic thaw that began with an announcement by U.S. President Barack Obama and Cuban President Raul Castro on Dec. 17.

Underscoring differences that remain between the United States and Communist-ruled Cuba, Rodriguez seized the opportunity to urge Obama to use executive powers to do more to dismantle the economic embargo, the main stumbling block to full normalization of ties. For its part, the Obama administration pressed Havana for improvement on human rights.

But even with continuing friction, the reopening of embassies in each other’s capitals provided the most concrete symbols yet of what has been achieved after more than two years of negotiations between governments that had long shunned each other.

In a further sign of a desire to move past a half-century of enmity, Secretary of State John Kerry later hosted Rodriguez, the first Cuban foreign minister to visit Washington since the Cuban Revolution, for talks at the State Department.

While both men stressed the momentous occasion, they also sought to temper optimism fueled by the day’s festivities.

The atmosphere was festive in D.C., but less so in Havana:

…a three-man military honor guard marched onto the front lawn of the newly restored embassy in Washington where the Cuban flag was hoisted while the Cuban national anthem played.

There were competing chants from the crowd outside the gates. “Cuba si, embargo no!” shouted one group. “Cuba si, Fidel no,” yelled a much smaller contingent of counter-demonstrators.

Rodriguez then spoke inside the stately building, which was visited by revolutionary leader Fidel Castro just months after he seized power in Cuba in 1959.

In Havana, the U.S. Embassy was also reopened for business but with much less fanfare. The Stars and Stripes will not be hoisted there until a visit by Kerry on Aug. 14.

A crowd of about 100 Cubans, tourists and Cuban-Americans gathered in front, many clutching small U.S. flags. One Cuban held a banner that read, “Welcome USA.”

In Washington, more than 500 people attended the ceremony at the nearly century-old mansion. The U.S. delegation was headed by Assistant Secretary of State Roberta Jacobson.

Cuban President Raul Castro said in a speech that “it’s time for a new relationship” between the U.S. and Cuba. He also said that he wants the U.S. base at Guantanamo Bay returned to Cuba, and for Obama to bring an end to the embargo.

Florida senator and presidential hopeful Marco Rubio was quick to tie the controversial embassy openings with another Obama Administration failure. From the Washington Examiner:

Sen. Marco Rubio said Monday, July 20, will go down in history as President Obama’s “Capitulation Day,” as it marked the day that the United Nations Security Council voted to lift international sanctions on Iran in returning for limits on its nuclear program, and when embassies were opened in Washington and Havana.

“History will remember July 20, 2015, as Obama’s Capitulation Monday, the day two sworn enemies of the United States were able to outmaneuver President Obama to secure historic concessions,” the Florida Republican said in a statement.

Events at the United Nations, Washington and Havana, he said, are proof that “we have entered the most dangerous phase of the Obama presidency.” He accused Obama of “flat-out abandoning America’s vital national security interests to cozy up to the world’s most reprehensible regimes.”

John Kerry will raise the U.S. flag in Cuba during a trip to Havana on August 14.

Some flags come down. Others go up.

Barack Hussein Obama not only stabbed Cubans in the back. Now he’s twisting the knife around as he puts salt on the wound.

Most importantly, this band of criminals devoted the entire resources of the Cuban state to spread and export hate towards the United States all over the world.

This band of criminals, they are enemies of the United States.

One family had been well-off before Castro, the other working class. Both were so grateful to be able to start over in the USA with only the clothes on their backs that the older members would almost always begin to weep when they spoke of arriving.

Thanks.
Unfortunately, the stories of those families you met are very close and very real to me.
There’s many of us, who recovered our dignity as human beings thanks to the generosity of this nation, the one BHO is trying to “fundamentally” destroy.

And yes, whatever horrors you heard are true. Probably worse.

These are dark, dark days in America, where lies are used to “normalize” some of the worst, most blood-soaked terrorist thugs on our planet.

And why? Certainly NOT to benefit the Cuban people. Because nothing the Castros have or will permit will have that effect.

It is madness on the same plane with Iran, but with slightly less dire consequences.

If Obama cared about the people, he would have tried to extract some concessions or reforms in exchange for normalizing relations. He doesn’t.

Obama said he would close Guantanamo back when he was campaigning 8 years ago. He’s ran into roadblocks here and there. This is going to make it much easier, Castro wants it back…hand over the keys.

We saw what has happened in Iraq when we turned over bases, facilities, and equipment. Just you wait…

Rubio is entirely correct when he says that we have entered the most dangerous phase of the Obama presidency. Getting cozy with some of the world’s rogue states, giving them much, getting little or nothing in return is now so much a pattern that it must be deliberate. In the remaining year and one half of the Obama presidency, as Jan. 20, 2017 approaches and with it loss of power, expect to see this president do more and more things he surely knows his successor may reverse, trying to lock them in, such as giving away Guantanamo. For those of us who lived through the Cuban missile crisis when we came within a inch of all being incinerated with nuclear weapons, there can never be any forgiveness for Castro and what communist Cuba represents.