Video: The 2012 “speech” that predicted the Iran Nuke Deal

Video: The 2012 “speech” that predicted the Iran Nuke Deal

Life imitates art, but with a straight face. 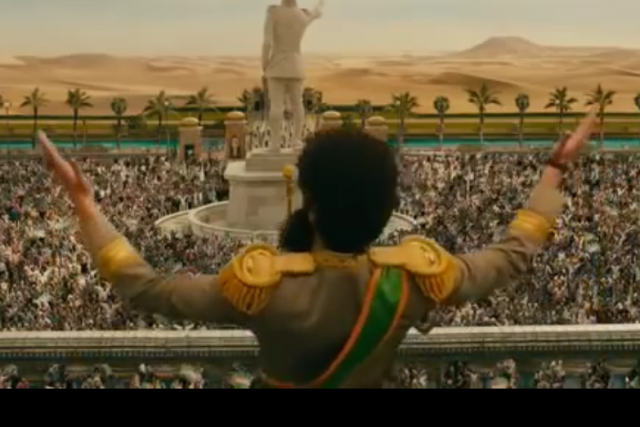 Here is the opening scene from the 2012 film The Dictator, in which Sasha Baron Cohen addresses a large crowd. In announcing the nation’s start of uranium enriching, Cohen as the dictator can barely keep a straight face when he insists that it will be only for peaceful medical research and not used against Israel.

Because they are better actors.

“Because they are better actors.”

By which you mean, “liars”.

Heh… (A little half-heartedly, because I understand how grim this real story is.)

The first couple of minutes of Argo show how the left feels about iran and the long ago hostage situation. Obama greatly admires iran and Cuba because they have kept the faith and stood up to the man ie US. if at all possible he would return nukes to CastBros that jfk kicked out. Of course who knows it may be possible.

And woul be able to do this because U.S. public are fools and brainwashed by media

Most people don’t understand Chamberlain. He was working from a position of great weakness, something Churchill had been emphasizing for several years at that point.

In 1938 the RAF didn’t even have any Spitfires until August, after which two squadrons each received planes at one per week. There were only two squadrons of Hurricanes available as well. Even at the start of the war in September 1939 there were barely 300 Spits in commission.

Chamberlain was told by his military advisers it would be pretty much suicide to go to war with Germany in 1938. I’m not saying it was the right choice, but that’s what the British experts were saying. He apparently honestly thought Hitler could be bought off with the Sudetenland Germans. It was, from that point of view, worth the breakup of Czechoslovakia -a country which had not existed previously- to avoid another major war. What we forget today is that the First World War (then known as the Great War) was far more traumatic to Europe than the second. At that time the continent hadn’t seen mass warfare since the Napoleonic wars. For them it was as terrifying as a nuclear exchange would be for us today, a fear which had been stoked by hysterical “news” stories during the interwar era. It was pretty much the equivalent of global warming psychosis today.

While I don’t agree with the Chamberlain administration’s analysis, it makes sense within the context of the time. Germany was already far ahead of either France or Britain in terms of trained manpower, as well as technology. He was trying to avoid war with a superior opponent which could kill tens of millions of people.

Some folks have even argued the year gained allowed Great Britain to survive the first two years of war. So Chamberlain was at worse naive to expect Hitler to stay bought; he gets more Germans, and the West gets peace. That’s not cowardice, it’s cold-blooded practicality.

Obama & Kerry, not so much.

Do you mean it isn’t just a weird coincidence that Barack Hussein always ends up favoring whoever is most hostile to the United States?

This was supposed to be a reply to “bobinreverse” above.