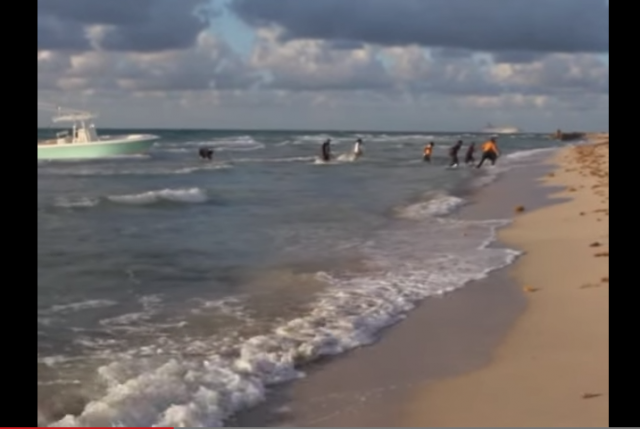 This might be funny if it wasn’t such a serious subject.

Earlier this month, as a fashion photo shoot was taking place on Miami Beach, a boat carrying illegal immigrants approached the beach, and the passengers proceeded to run onto and across the beach. The incident was captured on video which you can watch below.

Obviously, a border fence wouldn’t have prevented this incident. In fact, this is the way immigrants from Haiti, Cuba and other countries came to America for years. This shows that immigration enforcement is not just about a fence or the land border.

Thinking it was simply scuba divers, she said, she turned off her camera – but turned it back on when she saw the men pouring off the vessel, out of the surf and onto the sand.

Border Patrol officials didn’t sound surprised by the brazenness of the men – or the boat that dropped them off.

“That’s a testament to how confident these organizations are — what we call transnational criminal organizations — who smuggle criminals and narcotics right onto the beach,” Border Patrol spokesman Frank Miller told the New Times.

“There has been an increase in known maritime smuggling in Florida — from Key West all along the Florida coast — from fiscal year 2014 to now,” he said.

The Broward Palm Beach New Times also covered this story and offered some numbers from Border Patrol and the U.S. Coast Guard:

The Border Patrol’s website says there were 2,034 “Illegal Alien Apprehensions” by the Miami office in 2014 and 3,942 apprehensions via “coastal border” nationwide that year. (3,338 apprehensions were for immigrants coming in through the nation’s northern border with Canada, and a whopping 479,371 migrants were apprehended coming through the southwest border with Mexico.)

The Coast Guard’s website offers slightly different numbers: 3,587 “Alien Migrant Interdictions” in 2014, and 1,272 from January through May of this year. The Coast Guard data is broken down by nationality and shows that the vast majority of migrants it intercepts are Cuban. (2,111 of last year’s migrants were Cuban; 1,103 were Haitian; 293 from the Dominican Republic; 48 from Mexico, and 32 from other countries.)

PLEASE do not refer to them as “illegal immigrants”. A little dignity, please. They are “future Democrat voters”.

PLEASE do not refer to them as “illegal immigrants”. A little dignity, please. They are “future Democrat voters”.

If they are Cubans, they vote Republican, because Republicans do not oppose the policy of instant amnesty for them.

If they are Cubans, they vote Republican

Alas, their kids don’t, and neither do a lot of the more recent immigrants themselves.

As a native Floridian, I’ve been trying to tell people for YEARS that a fence on the border of Mexico is not the solution with thousands of miles of unsecured coast line running from Mexico to Florida.

It’s not THE solution.

It’s a piece of the solution, useful in certain places.

When you can use a physical barrier (aka a fence) to stop 90+% of the captured illegal immigration occurring in a given year, a Nation can then devote resources to the smaller avenues of entrance, such as by sea (more coastguard resources, UAVs, etc…).

I’m all for building something akin to the Great Wall of China on the Mexico boarder, except make it 75 feet high, front the Mexican side with razor wire and electrify the whole thing.

It’s called the “Pareto Principle” and roughly described is that 80% of your problem comes from 20% of your sources. Address the largest source FIRST, and then you can devote the resources conserved to attacking the remaining issues.

Don’t let the perfect be the enemy of the good. Also, what Mr. Skinner said.

“3,338 apprehensions were for immigrants coming in through the nation’s northern border with Canada, and a whopping 479,371 migrants were apprehended coming through the southwest border with Mexico.”

We’ll lose the debate + ability to fix this situation if we continue to allow the media to bastardize and misappropriate the word immigrant to mean the same as illegal aliens and foreign nations who don’t give a [email protected]%# about our sovereign borders.

An ‘immigrant’ is a foreign national who acknowledges our sovereign right to confer that title. Beyond that, the person is trespassing, squatting and a military invasion by proxy.

7 people in the water. I counted them.

So, let me get this straight – you don’t want to build “The Fence” because these 7 people got in anyway? Is that about it?

Wait. Or is it that your ultimate wish is that nothing gets done. And you get to continue complaining for ever?

What will ultimately happen (and may be the aim of many of the participants in the argument on either side) is that every person in the US will be required to be scanned and either carry a document of some sort attesting to where and how they came to the US and if they are a citizen or to be “chipped” such as pets currently can be with a device that can contain that same (and more) information to anyone carrying a chip reader.

This will be touted as the only way to identify and control entry by others into the US and will also be said to allow shorter wait times at boarding gates to transport.

Of course that will soon apply no only to transport into and out of the US but transport anywhere within the US and those readers will eventually be carried by all law enforcement officers and others.

Hope you all are content with you’re pre-apocalyptic life style.

Drones with mace … start spraying when they get in US waters. Maybe next spray them with an orange dye so if they happen to still make it to shore they can be identified, along with the boat that can be confiscated or sunk. And maybe drop a potent stink bomb on them, so no one would harbor them.

That would work along the land border as well, along with the wall. These are foreign national invaders coming to steal from US citizens, and could be shot, so spraying them is a humane solution. But welcoming another 50 million third worlders means we lose America the land of the free.

All that is lacking is government willpower. We know the “centrists” are happy to have more subservient voters, so DC can be all powerful. Even Mitch and crying Boehner are happy with centralized power, and gleefully flip off the base, calling constitutional Christians “crazies” or “whacko”, in harmony with Democrats.

Crazy that East Germany used to shoot people for trying to get out. Now third world countries send their lower class in, so they can absorb our welfare and send back off the book remittances. Some $60 billion (documented portion, not counting another $60B? drug and human cargo money) a year flow across our southern borders, largely coming from illegals that get some form of welfare here.

These invaders work jobs off the books that reduce tax revenue, steal legit jobs, and their remittances stop the money from circulating through our own economy. “You (Mexico, and all) didn’t build that” (US job market), but they get the direct stimulus from the middle/upper class hiring of cheap invading labor, thus exporting economic activity and its famous “multiplier effect”.

This corrosive nature of the illegal aliens is underestimated, as I see it. But the La Raza types demand the invader’s “human right” to our money.

It’s a comprehensive problem with dual causes in America and second and third-world nations, which open immigration and amnesty policies serve to exacerbate and progress.