Turkey will let US launch ISIS strikes from Incirlik Air Base

Turkey will let US launch ISIS strikes from Incirlik Air Base 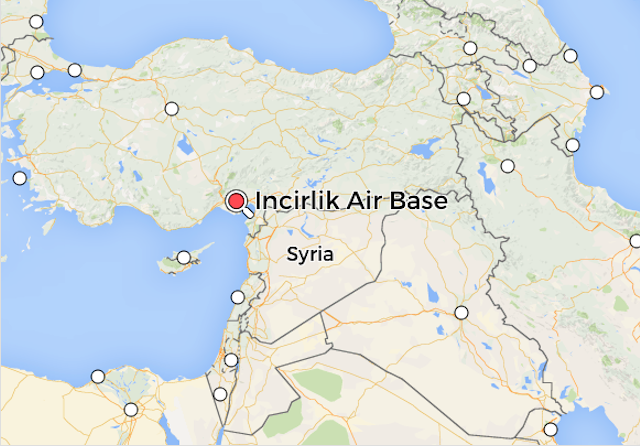 The Wall Street Journal is reporting via defense officials that Ankara has agreed to allow the United States to launch air strikes against ISIS from the Incirlik Air Base in southern Turkey.

This is a departure from previous Turkish policy, which until now only allowed drone launches from the base. No Turkish aircraft will be used in any strikes launched by the US.

Reuters reports that a deal between President Obama and Turkish President Tayyip Erdogan may have been reached as early as Wednesday; White House press secretary Josh Earnest told the media today that the two leaders have reached an agreement to “deepen” cooperation in the fight against ISIS, but didn’t go into details.

Turkey’s concerns about the violence in Syria go beyond the threat ISIS poses to the rest of the world. Until now, Turkish officials have refused to lead on the Islamic State pushback, citing concerns that merely taking out ISIS will not quash the violence caused by intra-Syrian conflict. Ankara has advocated for the ouster of Syrian President Bashar al-Assad in exchange for a larger role.

With deteriorating situation on the Turkish-Syrian border, however, Ankara has indicated that they’re ready for a change in policy.

Ankara has refused to take a frontline role in military action against Islamic State and said only the ouster of Syrian President Bashar al-Assad – not just air strikes on the radical Islamists – can bring peace.

Turkey’s stance has frustrated some of its NATO allies, including the United States, whose priority is fighting Islamic State rather than Assad. The allies have urged Turkey to do more to prevent its Syrian border being used as a conduit by foreign jihadists.

Turkey is also concerned about disruption among its Kurdish minority, which mainly lives near the southeastern border.

Earlier on Thursday Turkish forces fired tank shells across the border after coming under fire from Islamic State militants that killed a Turkish soldier near Kilis, an area where Ankara had recently sent reinforcements.

The fighting came days after a suspected suicide bombing by the Islamist radical group in the Turkish border town of Suruc killed 32 people, many of them students and some of them Kurds, touching off waves of violence.

Currently, the US has six predator drones stationed at Incirlik, two of which are armed with hellfire missiles.

With Turkey taking an expanded role in the fight against ISIS, I’m interested to see how officials alter their response, if at all, to Turkey’s role as a springboard into Syria for those looking to join the ranks of the Islamic State. Since last year, western officials have had to run continual defense against an influx of converts, most of whom hop flights into Turkey and then cross the Syrian border.

Now all we have to do is get Obama out of the way!

Strike Three on you Obama!

“Strike Three” is a baseball reference – so the Democrats, Progressives, Communists, and Leftists will know……

There is no Kurdistan, you say? My point exactly.

Leading the fight against the ISIS nuts are the Kurds in every area. Under-armed, they are very effective fighters. This concerns Turkey because they have oppressed the Kurdish minority in the south for a century, and with the break-up of Iraq and Syria, all these artificially separated Kurdish communities may envision an independent state.

Turkey is scared to death of that. To the point that even the dictatorial Erdogan relaxed restrictions on the Kurdish language in businesses recently.

Turkey doesn’t care about ISIS one way or the other. But they would much rather they be defeated by air strikes from their soil than by the Kurds.

That’s very Christian of them!

I’d love to know what the side deal was.
Erdogan must have gotten a few billion in his Swiss account.

25% of the vote went to Kurdish Leftists in the last election, but ultimately all Kurds want the nation the British promised them … Kurdistan … which would be made up of territory from Syria, Iraq and Turkey.

Did you notice those videos of Turkish military and civilians cheering (but doing nothing else) as they watched the “battle for Kobane” from the Turkish side of the border.

Erdogan would do anything to stop the Kurds from ceding a piece of Turkey for Kurdistan, even if it meant propping up Syrian President Bashar al-Assad or ISIS.

I don’t know how much tactical difference this will make: anti-ISIS operations are already being flown out of RAF Akrotiri (on Cyprus), which is not much farther from the action than Incirlik is, and it’s not as though there’s enough air activity to need a second base.

Erdogan arranged for a number of shipments of arms to ISIS from Turkey using Turkish vehicles and personnel as late as 2014. He and many Sunni Turks had no problem with ISIS slaughtering Shi’ites. He wanted ISIS to take out Assad but Iran and Russia’s support didn’t allow that to happen. When ISIS made a direct and personal threat to Erdogan, he realized they were not nice fellows. He has now had second thoughts because his head could be next.