“Would You Rather Have a Conservative as Your Next President?” 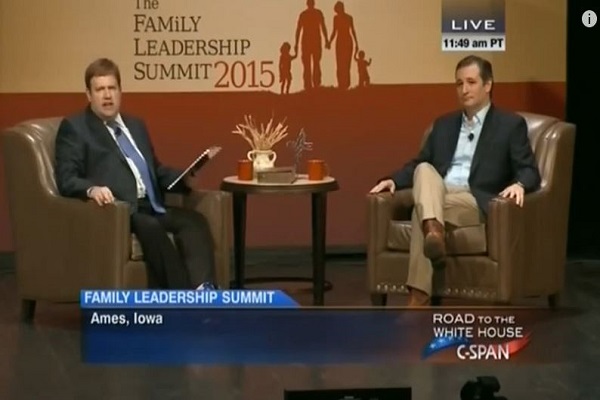 I like the one-on-one sit down interview format, and I think Frank Luntz does a great job both interacting with the audience and asking key questions.  According to Luntz, the candidates were “unable to rely on a Teleprompter or note cards” and as such “the presidential hopefuls display their impromptu speaking skills.”  Not only did Luntz ask questions of the candidates, but the audience did, as well.

Donald Trump’s comments about John McCain have taken center stage, but there were many great moments throughout the day.  You can catch all ten full interviews of the attending presidential candidates here.

Of all the interviews, I was most taken with Ted Cruz’s (surprise, surprise).

Cruz tweeted some of the key points he makes during the interview:

The First Amendment is our first freedom and I’ll never shy away from defending the religious liberty of every American! #FLS2015

Watching Cruz during this exchange is telling.  He remains calm as Luntz asks the Iowan audience how many preferred a senator, then asks how many preferred a governor—the applause is much more enthusiastic for the latter.  And understandably so.  Governors have executive experience dealing with state legislatures, managing executive agencies and matters of their state, and handling the stress and pressure of the executive branch.  Conservatives prefer governors with good reason.

Clearly ready for this argument, Cruz responded, “how many of you would like to have a conservative as your next president?”, and the crowd went wild.  I have to admit that if we’re looking at a former governor Bush or current governor Christie, I’m all-in for a conservative senator (or former CEO) over either of them.  And if it came down to Cruz (or Carly) running against former governor O’Malley, I can’t imagine many conservatives deciding that O’Malley’s governorship makes him a better choice for president, so there are limits on this as a litmus test for GOP presidential candidates.

But what say you?

Cruz or (another RINO)Bush? Cruz or RINO Christi? Gee, being governor doesn’t mean all that much, does it? Cuz if the “party” decides it’s (another) Bush or Christi, I’m voting somebody else. Yah, yah, “wasted vote” and all. I don’t care. NO MONEY, NO VOTES FOR RINO’s.

Don’t lie. You are in for whoever the Democrats serve up.

And you’ll get the shit sandwich you deserve. The R’s could nominate Hillary and you would vote for her because republican.

And what’s a LOT more…

“I believe him”.
That’s exactly what I mean with by “trust” in my comment below. I’m 100% certain what Cruz says, Cruz will do. Not 100% on other candidates.

The only reason Donald Trump has gotten so much attention from the LSM is that they do not want the rest of the potential candidates to get their message through. They are treating Trump like the only candidate, in order to pretend that nothing the rest of the candidates said was worth hearing.

What Trump said was an amusing framing of what gets said at every allegedly Conservative website (possibly by Democrats), every time McCain’s name is mentioned. Trump is obviously not filtering his thoughts in the way politicians normally do, probably on purpose. And it was far, far kinder than what gets said at the alleged Liberal websites, or by Nancy Pelosi and Harry Reid.

The LSM does NOT want to give Cruz, or any other Republican, a national platform while they are discussing the issues.

Yes. The LSM’s job is to sell the narrative. They tell you who the central committee fears — sometimes explicitly attacks) and sometimes implicitly (silence or distraction — “Hey, look over here!”).

If all other factors were equal, a governor might be preferable over a senator. But all other factors are never equal. Take Cruz vs Walker. Walker is a good guy, someone I’ll be happy to vote for, but he keeps hiring Libs, then fires them. He’s taken immigration positions that are hardly conservative. Cruz has done none of these things; to the contrary, Cruz has always said and done what a conservative wants. I TRUST Cruz more than I trust Walker, and when you come down to it, that’s all that matters.

Prefer someone who has accomplished conservative goals, such as Walker.

But as FrankNatoli wrote, other factors are never equal. Walker was for illegal aliens, before he was against them.

Not clear who that is yet. If Walker convinces me he’s sincerely going to effectuate a reversal of our fortunes, okay; if Cruz, okay; if Trump, okay.

If the country turns into Central America, I won’t care who the president is. It is THE issue. Ann Coulter agrees; as she’s commented, she started writing a book with several topics then discovered how bad the illegal alien problem is and jettisoned everything but that.

Oh- and Cruz supports more H1-B visas, while we have STEM workers not working in their fields, and our STEM graduates not finding STEM employment.

Cruz would act consistent with law, but he clearly doesn’t agree that we need to REVERSE the flow of illegal aliens, and legal immigration, for that matter.

We have too many legal immigrants coming in, considering our workforce participation rate is in the cellar.

Legal immigration is not the problem.

That “conservatives prefer a governor” talking point is garbage. I have no intention of supporting George Pataki for ANY office, ever again! I think a lot of people are just tired of having a president who, previously, was a senator – and not even a very good one.

There is a long history of America choosing Governors, Generals, and Vice Presidents, and only rarely Senators. Only three sitting Senators have been elected – and the last was opposed by another Senator, so we were stuck. But they tended to be weak in office. Harding, Kennedy, Obama. Not a sterling history.

Not that we might never choose a Senator, but with no less than seven multi-term Governors and a business executive already in the field, it makes it less likely.

Experience in administering a large organization may not be everything, but it IS something.

“Experience in administering a large organization may not be everything, but it IS something.”