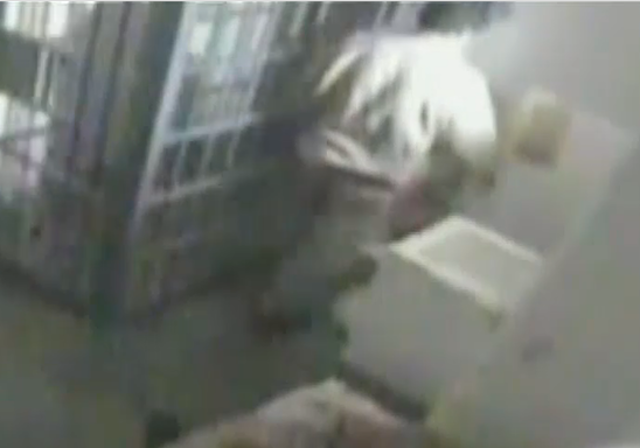 On Saturday, Joaquin “El Chapo” Guzman escaped from Mexico’s maximum security Altiplano Prison. As head of the infamous Sinaloa drug cartel, it wasn’t Guzman’s first run in with the law—and it wasn’t even his first prison break from a maximum security facility.

In new surveillance footage released by the Mexican government, you can see the moment Guzman disappears from his cell and into the mile-long tunnel that eventually led him to freedom. In the video below, you’ll see Guzman change his shoes, walk over to the shower area of his cell (conveniently equipped with a half-wall for privacy—great idea,) bend down, and disappear through a gaping hole beneath his shower grate. (Authorities discovered the escape hatch after they realized Guzman was gone.)

Watch, via via Fox News:

The dividing wall blocked the interior camera’s view of the hole into which Guzman appeared to disappear at 8:52 p.m. local time this past Saturday. Reuters reported it was one of two blind spots for the security cameras in Guzman’s cell. National Security Commissioner Monte Alejandro Rubido that the blind spots were intentional and designed to permit Guzman some privacy while washing.

Rubido added that Guzman’s behavior up until his escape and had been considered “normal.”

On Tuesday, journalists were taken to see the other end of the tunnel through which Guzman escaped, in an unfinished barn near the prison. Guzman would have traversed the mile-long tunnel on either a specially modified motorcycle or one of two carts pushed along steel rails. The tracks end at the base of a wooden ladder, the first of two that would have taken Guzman to the floor of the barn, where a digging crew had left 4-inch by 4-inch wooden beams, 8-foot- tall coils of steel mesh, gallons of hydraulic fluid, 10-foot lengths of PVC pipe and an electric disc saw. From there, Guzman would have slipped out the barn door and apparently into thin air.

The Mexican government has been humiliated, but they’re still not doing everything they can to make sure El Chapo ends up back behind bars instead of running a global heroin and cocaine distribution ring. Three prison officials have been fired so far, including the director of the Altiplano prison—but Mexico continues to refuse the help of the United States government in tracking Guzman down. The US has offered the assistance of the US Marshals, drones, and even a special task force, but to no avail:

But the Mexicans have kept the Americans at bay, without giving an answer on the extra help, according to Mexican and American officials. They say the delay has confounded law enforcement agencies on both sides of the border and undermined efforts to find Mr. Guzmán, the billionaire head of the Sinaloa cartel known as El Chapo, before his wealth and global connections help him disappear.

“We can’t really understand why they are refusing to give an answer,” said one Mexican official, who works in the country’s security apparatus but was not authorized to speak publicly about his government’s deliberations. “We’re just on standby.”

Mexico’s hesitations over the American offer reflect years of strain between the countries as their ambitious joint effort against the cartels has waned, including a drop in extraditions to the United States and divided priorities in Mexico.

Mexico’s interior secretary, Miguel Ángel Osorio Chong, said Monday night that the two countries were cooperating, just as Mexico worked closely with Guatemala to secure its southern border. But at a news conference about the search for Mr. Guzmán, who absconded through an elaborate tunnel dug 30 feet beneath his prison shower, Mr. Osorio Chong made clear that no additional American assistance should be expected.

“We are not going to do something new beyond what we have already been doing,” he said.

This may be the perfect time to go above and beyond, sir.

This is no ordinary drug dealer. Officials estimate that the one year construction project to help Guzman escape cost 50 million dollars to complete, and was finished in almost half the time it should have taken. This man has the influence and resources to comfortably run for the rest of his life.

What an unfortunate time to highlight the diplomatic tensions between the US and Mexican governments. We’ll keep you updated on the manhunt.

So, they are going to track down and capture the man whose sophisticated organization ran this project ahead of schedule and on budget?

Years ago I proposed a bumper sticker which my YR friends thought was funny. Not so funny now …

Elect The Mafia, They Never Spend More Than They Steal.

in Mexico, in New York state, and in any “Vigilante city”, this is all about those charged with enforcing the law selling out the law.

This, of course, includes Barracula.