Scott Walker: We need to acknowledge radical Islamic terrorism is our enemy

Scott Walker: We need to acknowledge radical Islamic terrorism is our enemy

“It’s not enough just to have containment anymore.” 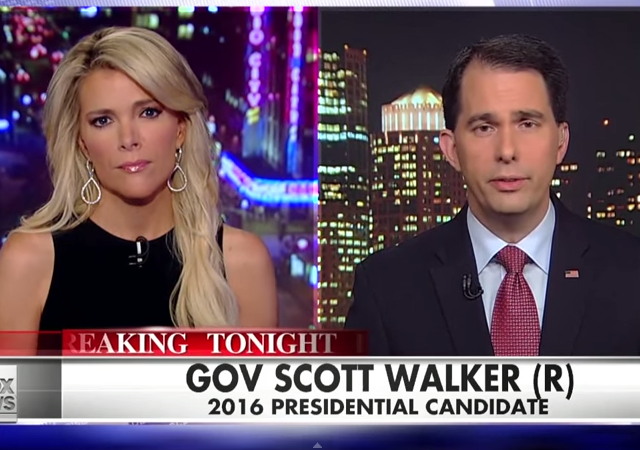 Governor Scott Walker appeared on the Kelly File Thursday night and commented on the shooting in Chattanooga. His response was starkly different than Obama’s.

Republican presidential candidate Scott Walker joined the growing chorus of those calling on President Obama to acknowledge that America is at war with radical Islam on Thursday, saying we need to call it what it is.

We need to acknowledge that we’re at war and radical Islamic terrorism is our enemy.

It’s not enough just to have containment anymore. When you talked about the policies that prohibited our military personnel from being armed at an establishment like this; those are outdated.

[W]e’re facing an enemy in radical Islamic terrorism that’s willing to take the fight to us.

Watch the segment below. If you continue past the 3:00 mark, Walker also comments on the Planned Parenthood controversy:

At a campaign event in Iowa yesterday, Walker called for ending the gun ban at military recruiting offices.

Thank you Scott for getting it.
Scott Walker and Marco Rubio speak to the issue of Radical Islam right along and Rubio especially against Iran.

Then you have Trump who still thinks it is 2008 and can only talk about McCain saying:
“McCain is not a war hero” Trump told an audience in Iowa today.
Trump said McCain is a loser, not a hero because he was captured. Trump said I like people who weren’t captured.

Trump who sat out the war with deferments.

“McCain is not a war hero” Trump told an audience in Iowa today.
Trump said McCain is a loser, not a hero because he was captured. Trump said I like people who weren’t captured.

Good! Scott Walker said what needed to be said to Americans.

Obama’s policy of dumbfoundedness, of myopic disavowal is killing our military at home.

There is nothing dumbfounded about Obama’s policy wrt Islamic terrorism, Jennifer. Instead, there is a deliberate and studied refusal to have any taint attached to Islam, even as he degrades and derides Judaeo-Christianity. His policy is bigoted, aggressively Islamic and, as all else with Obama, demonstrates an Islamic disdain for the legal tenets of Western civilization and for Western humanity, as a whole. Worse yet, if ever there is a president to make the argument to American blacks that Islam was their first religion it is the lying traitor in the WH, and that would be his final move in his bid to fully islamicize us and create a deep and ideological divide that would rent this nation asunder because nobody can live with Muslims when their numbers are large in a country.

I agree.
I wrote Obama’s “dumbfoundedness” as in he is shocked that anyone would disagree with his genuflection towards Islam and its radical community organizer ways.

Bravo. Acknowledge the problem. Step 1.
Then, uh, step 2?
Always play defense?
Or go to offense with rules of engagement that were last used on August 9, 1945?

Step 3 is acknowledging that “terrorism,” is not the only problem with Islam; there’s also lawfare and the other ways of pressuring societies to submit to Islamic strictures. These “nonviolent” tactics are effective partly because of the constant threat of Islamic violence, partly because of ignorance and stupidity (or treachery) on the part of Western elites.

Step 4 is acknowledging that the problem with Islam lies at the very heart of the “religion,” in its core doctrines and in the example of its so-called “prophet.”

Step 5 is stopping ALL immigration of Muslims and all student visas, and quarantining the “Islamic world” as much as possible.

I wish that Walker had actually called the problem by its name. He did not, and no one in our political system yet has. I will believe they are serious when they do.

Everyone plays the silly game of interposing “radical” before Islam, as though Islam is a peaceful religion. There is no radical Islam. There is just Islam: bloody, violent, misogynistic, anti-Semitic, anti-Christian, misanthropic, nihilistic, hegemonic, oppressive, brutal, backward, vicious, and satanic.

To say Islamic terrorism is our enemy is to understand the foe we face in the same way that Jefferson did. Terrorism is to Islam as circumcision is to Judaism, as the Lord’s Supper is to Christianity. To pretend otherwise is deceptive insanity.

A certain rabbi taught us that the Word of God is like good seed, and the hearts of men are like the various kinds of soil upon which the seed might fall when it is sown.

Some seed falls upon stones. It may sprout, but then dies quickly. Some falls on the footpath, where it may sprout but is trampled under foot. But the seed that falls on good soil sprouts and grows, and yields 100-fold.

There are Muslims that understand where their religion comes from, and they know that they share the same law as the Jews and Christians.

There is enough of the Word in Islam that people with good hearts can make a religion of decency from it. Those people are our natural allies, who may yet cut short the reign of terror brought on in their homelands by the Muslim Brotherhood.

It seems fair to ask just when we might expect this epiphany to actually occur.

The clock is ticking. The quintessential terrorist weapon—the Persian atomic bomb—is well on its way.

So we have a race—nukes vs. conversion of Islam into something the rest of the planet can live with. Which will win? Is it reasonable for civilization to wait to find out, and trust to dumb luck?

The fundamental problem with Islam is that there IS justification in their holy scripture for the violence that some today propagate, to wit, Sura 9:29:

Fight those who believe not
In Allah nor the Last Day,
Nor hold that forbidden
Which hath been forbidden
By Allah and His Messenger,
Nor acknowledge the Religion
Of Truth, from among
The People of the Book,
Until they pay the Jizya [tribute/tax]
With willing submission,
And feel themselves subdued.

You are asking devout Muslims to selectively disregard scripture. Why should they?

Valerie, you ever have been an apologist for Islam, and there are times you mask it better than other times. This is not one of those times.

Muslims have rejected both the Mosaic laws with its khesed towards all men, regardless of faith, and the Christian grace that is the khesed of the New Testament. When they knew God, they would not worship Him as God but have chosen to walk after a deceiver and the imagination of their own hearts. Instead of God, they worship a demon and a rock, having been led there by a false prophet. Instead of choosing to live peaceably with all men, their false prophet declared death to those who would not accept his false ideology, and his adherents, desirous of walking in his footsteps, slaughter all men who are not of their own mind and extend mercy and charity only to their own. Worse yet, they burn and destroy the Scripture, the outbreathed Word of God so their people will not read and be converted.

Christians have foolishly invited imams to our places of worship so these liars can preach their false religion. Has an imam ever invited a pastor to the mosque to preach Christ and Him crucified, dead, and resurrected? How can they hear, Valerie, except the Word be preached?

Now, tell me, Valerie, you say there is a seed in the Koran, where is the seed of the Word in that abomination which tells Muslims to kill the children of the book, to kill all who will not submit?

If you want Islam or are Islamic, say so, Valerie. Stop being an apologist for a vile ideology. Apologizing for heresy is neither Jewish nor Christian.

Islam comes from a psychopathic warlord who launched an extensive campaign of plunder and conquest, and founded a ferociously totalitarian ideology built on hatred of everyone and everything outside its own iron grip, and on an ambition to dominate and exploit all outsiders.

One of the central Islamic teachings is the sharp divide between “Muslim” and “non-Muslim,” the latter being considered worthy of the most savage punishments for failing to submit. Another central Islamic teaching is that every Muslim is obligated to support the ongoing jihad to force the whole world under the jackboot of Islam.

The appropriation of Jewish scriptural themes and traditions was a tool for trying to entice the Jews of Arabia to submit to Muhammad, the warlord. When the Jews said “No thanks,” Muhammad became bitterly, murderously hostile, and he wrote that hatred into the heart of Islam.

Surely you know that, Valerie. You must be aware of the psychotic hatred of Jews that is commonplace among Muslims. You must have noticed how easily the average Muslim is inflamed with rage against alleged blasphemers, and against people who simply dare to practice other religions in their midst.

You must have noticed how any substantial population of Muslims inserted into non-Muslim societies causes problems for non-Muslims, and eventually makes life intolerable for them.

But in the face of blindingly obvious evidence that Islam itself is a problem, out comes the “Common Word” hobbyhorse — as though the soothing, disarming pronouncements of some clerics nullified everything that Islam does and has been doing to the world for 14 centuries.

There may be a tiny number of nominal Muslims who can be allies, but there are many, many more who, if they have to choose, will side with the most savage Muslims over the most tolerant and accommodating infidels — because Islam commands them to make that choice. Many Christians and Yazidis have learned this painful and deadly lesson in the Middle East, because their “nice” Muslim neighbors — people they had known for decades, shared meals with, etc. — turned on them when ISIS marched into town.

Hanging your hopes on a carefully crafted document, or a handful of heartening cases, is naive and dangerous.

The persistent enemy of European civilization (and, by obvious extension, our own) is the same one it’s been for thirteen centuries.

No, not “radical Islamic terrorism”—that’s a tautology, not an enemy.

Consider; I understand from the testimony of reliable witnesses that there were Germans during WW2—in fact, Germans whom the state apparatus had supplied with Russian slave laborers—who mistreated no one, never packed any children into ovens, and never even kicked any dogs.

But … so what? Does this imply that bombing Germany’s industrial capabilities to rubble was a bad policy? It does not.

If you’re too cowardly (or, if you prefer, call it “liberal” or “fair-minded”—pick your favorite euphemism) to even admit who your enemies are, you can’t possibly beat them.

Say it lying media! Chattanooga was a terrorist attack.