“The only permanent danger to the hope that is America, comes from within” 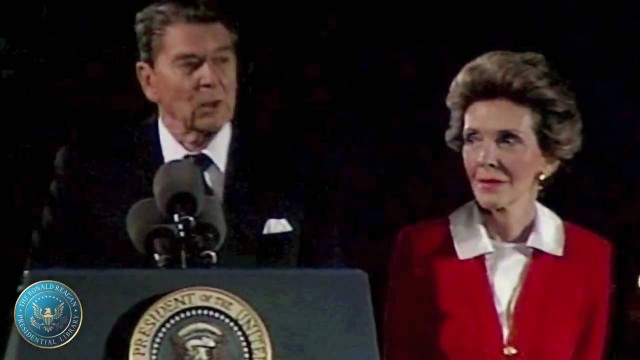 Often times, Americans look to presidents to inspire: to remind Americans of the greatness of our country, both past and present.

In Ronald Reagan’s 1986 Independence Day address, he did just that:

Here is the key part:

My fellow Americans, it falls to us to keep faith with them and all the great Americans of our past. Believe me, if there’s one impression I carry with me after the privilege of holding for 5 1/2 years the office held by Adams and Jefferson and Lincoln, it is this: that the things that unite us — America’s past of which we’re so proud, our hopes and aspirations for the future of the world and this much-loved country — these things far outweigh what little divides us.

And so tonight we reaffirm that Jew and gentile, we are one nation under God; that black and white, we are one nation indivisible; that Republican and Democrat, we are all Americans. Tonight, with heart and hand, through whatever trial and travail, we pledge ourselves to each other and to the cause of human freedom, the cause that has given light to this land and hope to the world.

The rest of the text of his address can be found here.

Great address and clearly appropriate for the day. But since this post is about Reagan I’ve always thought a couple of paragraphs from his farewell address were prescient:

>> “An informed patriotism is what we want. And are we doing a good enough job teaching our children what America is and what she represents in the long history of the world? Those of us who are over 35 or so years of age grew up in a different America. We were taught, very directly, what it means to be an American. And we absorbed, almost in the air, a love of country and an appreciation of its institutions. If you didn’t get these things from your family you got them from the neighborhood, from the father down the street who fought in Korea or the family who lost someone at Anzio. Or you could get a sense of patriotism from school. And if all else failed you could get a sense of patriotism from the popular culture. The movies celebrated democratic values and implicitly reinforced the idea that America was special. TV was like that, too, through the mid-sixties.

But now, we’re about to enter the nineties, and some things have changed. Younger parents aren’t sure that an unambivalent appreciation of America is the right thing to teach modern children. And as for those who create the popular culture, well-grounded patriotism is no longer the style. Our spirit is back, but we haven’t reinstitutionalized it. We’ve got to do a better job of getting across that America is freedom — freedom of speech, freedom of religion, freedom of enterprise. And freedom is special and rare. It’s fragile; it needs production [protection].<<

Academia now teaches students to hate America. That America is about white privilege and oppressing everybody who is not a straight white man. Just yesterday I read that Gallup polling showed that only 47% of Democrats are extremely proud to be an American, which is actually higher than I imagined.

The threat truly does come from within.

We all agree with him.

The second, greater threat (now that we understand the first threat) is complacency.

Can you imagine what Reagan would have done with Boehner had he entered the oval office stuck with him as a squeaker? Boehner would have been gone in a week.

When Reagan was Governor of California, I lived in downtown Sacramento. He did not live in the Governors mansion but lived in a private home over near 44th street. His limo would take him to work at the capitol often down “J” street where I lived. I often saw him and waved and every time he saw me or anyone else wave he always had the warmest smile and waved back.

He was not a fake and I miss him very much.