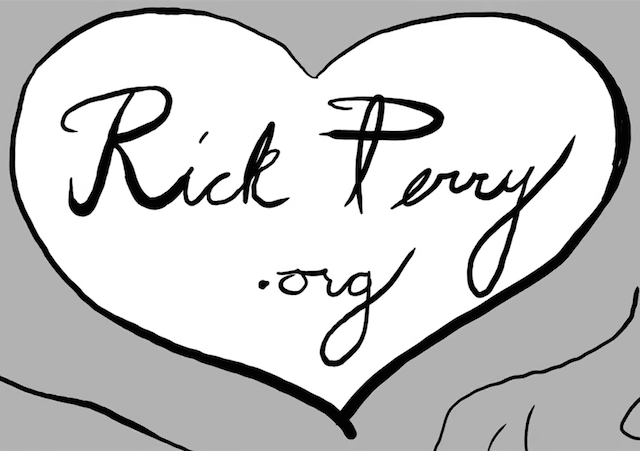 This week Rick Perry released a new campaign cartoon that tells the story of a frustrated little stick man who flees Obama country for the promised land of Texas. Our protagonist finds prosperity in the Lone Star State, under the watchful guidance of one Governor Rick Perry, and ends the spot by sending in a modern, slick, mobile donation to the campaign. Easy peasy!

Some conservatives loved it. Others thought it was “freaky” appeal to millennials. (I don’t get the “millennial” vibe, personally.) The Dallas Morning News said it was “different and kinda cute,” and the Houston press described it as “what you’d get if you paired up Beavis and Butthead animators with a French art house film director,” which is an artful and probably accurate description.

I like it. It’s different and creative and tells an entire story without invoking the types of “real America” cliches that turn good campaign ads into the lettuce of your nightly O’Reilly Factor/Kelly File sandwich. It may not be typically “presidential,” but you shouldn’t worry about that—Rick Perry the candidate more than makes up the difference.

In 2011, a drop in state tax receipts meant that the Texas treasury was tens of billions of dollars short of what state agencies wanted to spend. Perry got the usual advice: You must raise taxes, you must raid the rainy-day fund, and you must understand that cutting spending would ruinously de-stimulate the state’s economy. Perry instead demanded and secured $31 billion in spending cuts. The usual critics produced the usual squeals, but Texas’s economy thrived.

That is the first line on Rick Perry’s presidential résumé, though the former governor is refreshingly forthright about the fact that there is more to Texas’s success than his own leadership.

Of course, as Williamson points out, Perry has a steep political hill to climb; his previous presidential campaign still serves as a stark reminder that things can and will go wrong, even for a highly qualified candidate.

Maybe a quirky ad campaign is just what he needs to get his doubters to take a second look.

Perry cozies up to latins. No thanks.

Yeah, because all “latins” are, what, evil? Spawn of Satan?

Way to be bigoted, dude.

And as we have all read, all new job growth in the U.S.A. has gone to foreigners. How many of those new jobs in Texas went to actual AMERICANS?

Texas has one of the highest percentages of foreigners….

And who are you, that you’re not a “foreigner” yourself?

I LOVE foreigners. I just want to make sure they come here using the LEGAL methods, not sneaking in with the Drug Trade, etc.

I don’t know you, CtF, but if you don’t like foreigners, you are going to have a really tough go at living in the United States. Seek counseling.

I think ALL foreigners should go back to where they came from, as soon as possible!

I love this! Concise exclamations of the free-market are always welcomed.