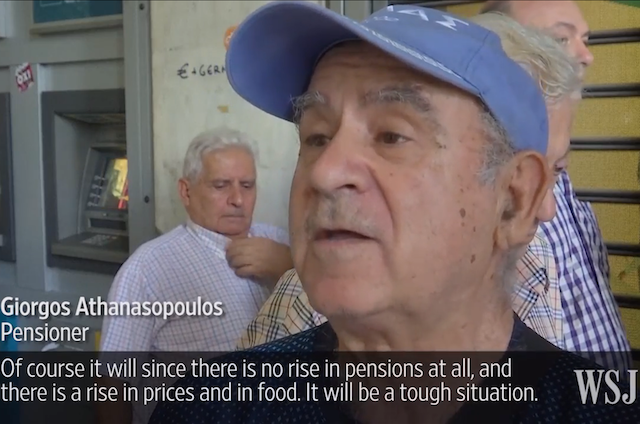 For the first time in three weeks, Greek banks opened for business; but for account holders, that renewed access to cash comes at a price.

Although doors opened and ATMs were stocked, Greeks looking to cash out were met with the continuation of withdrawal restrictions of 60 euros per day; the government slightly relaxed the rules put in place during its negotiations with the rest of the Eurozone, and set an additional 420 euro per week limit, eliminating the need for daily runs on ATM machines and bank tills. Checking transactions are limited to deposits, and account holders are still restricted from taking out cash while abroad.

Shoppers saw a 10% hike in the country’s VAT tax approved by parliament on Thursday; parliament also agreed to reforms of pension and early retirement programs that have Greek citizens worried.

The Wall Street Journal has on the ground coverage:

Of course, those worrisome cuts were demanded by creditors for very good reasons.

On Friday, the European Union released a 7.16 billion euro loan aimed at helping Greece make its loan payments to the European Central Bank and International Monetary Fund; if not for that loan, Greece would sink further into arrears with its creditors. This has caused problems for Prime Minister Alexis Tsipras and other government officials, who are already feeling pressure from their left wing colleagues to reject austerity measures:

Mr. Tsipras announced a cabinet shuffle Friday to bring in ministers who would support his government’s quest for a new bailout deal.

To avoid more defections in a parliamentary vote on additional austerity measures, the government decided not to include new increases in taxes on farmers and new regulations on early retirements, which both Syriza and opposition lawmakers had threatened to reject. Parliament has the coming months to get those measures through.

Government officials in Greece say they now expect elections this fall if negotiations on a new bailout program are completed by then.

We’ll keep you updated on the economic situation as it develops.

Of course, a large part of Greece’s revenue problem is that they don’t collect the VAT at all from small businesses or at retail. And they haven’t, at least since the military government in the ’80s (and we don’t know that they were able to collect it).

Yes, there are whole departments of public employees whose job it is to collect and process those taxes, but not only have none of them ever done it, even the people who trained them in their current positions had never done it.

In other words, it means nothing, just postponing the inevitable default a bit longer, making it hurt more and longer when it comes.

If they had just defaulted six years ago when it became evident to even the most optimistic bondholder they could never, ever, pay, they would have already recovered by now.

Note in passing that the European banks who now hold most of the worthless Greek bonds don’t have to report them as losses as long as they keep “restructuring” them.

And this CAN (and will if we don’t fix our entitlements) happen here.

Regardless if you believe in abortion or not, it’s demographics : we killed off 55 million children (abortion) while we KNEW we had a huge aging population planning to retire and who are expecting, and, frankly, EXPECTING a retirement and health benefits.

90% of health care costs come in the last 3-5 years of your life. And, much as we can be fiscally hard nosed, how can we ask a person to watch their spouse die due to lack of medication.

There is no right answer.