Shutting down the opposition. 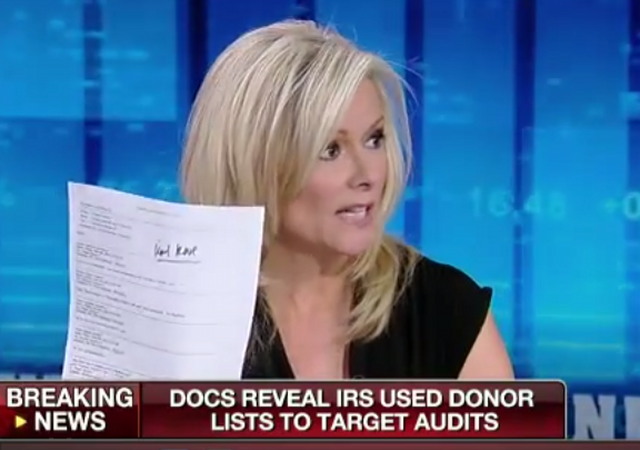 President Obama appeared on the Daily Show this week and claimed that the IRS never targeted the Tea Party.

Yet according to an explosive new report from Judicial Watch, the IRS used donor lists from certain organizations to target specific people for audits:

(Washington, DC) – Judicial Watch announced today that it has obtained documents from the Internal Revenue Service (IRS) that confirm that the IRS used donor lists to tax-exempt organizations to target those donors for audits.  The documents also show IRS officials specifically highlighted how the U.S. Chamber of Commerce may come under “high scrutiny” from the IRS.  The IRS produced the records in a Freedom of Information lawsuit seeking documents about selection of individuals for audit-based application information on donor lists submitted by Tea Party and other 501(c)(4) tax-exempt organizations (Judicial Watch v. Internal Revenue Service (No. 1:15-cv-00220)).

Lois Lerner, who has repeatedly denied any wrongdoing, is mentioned four times in the report:

On May 13, 2011, former IRS Director of Legislative Affairs Floyd Williams discusses compliance with “interest” from Capitol Hill: “Not surprisingly, interest on the hill is picking up on this issue … with Majority Leader Reid’s office, has suggested the possibility of a briefing for the Senate Finance Committee staff on general issues related to section 501(c)(4) organizations I think we should do it as interest is likely to grow as we get closer to elections.”

Lerner’s involvement and support for the new gift tax contradicts the IRS statement to the media at the time that audits were not part of a “broader effort looking at donations 501(c)(4)’s.”

Judicial Watch President Tom Fitton summed it up in this way:

These documents tell the truth – his IRS hated conservatives and was willing to illegally tax and audit citizens to shut down opposition to Barack Obama’s policies and reelection.

The FOX Business Network covered the story as it broke:

Glenn Reynolds of Instapundit has frequently reminded his readers:

In 2009, Barack Obama “joked” about having the IRS audit his enemies.

As far as I am concerned this is an IRS 9/11 attack on the American people (themselves included).

What is going to happen, are we just going to absorb it again? Will the politician of the day (the one who got the short straw) get on tv today and say:

“I am outraged, completely outraged, I agree completely and totally understand your anger, what a awful thing “they” did, I most certainly share your outrage – All with his/her fingers crossed behind his/her back. Figuratively of course, since not a politician born today has a clue why anyone would cross their fingers behind their back just because they are lying.”

Appears if they don’t audit you, the Obama and Democrats, progressives, leftists, etc. will murder you…..

The GOPe hates conservatives just as much as the dems do, the repubs just have to pretend to like them for the votes.

This new info is nice to know about. But how long has this investigation been going on? Nothing but hearings. Nothing will happen. It’s a big show that will fade away. Yes, I’m talking to you, Trey Gowdy.

You apparently want what the Congress CANNOT provide.

ALLLLLLLLLL Congress can do is inquire…investigate.

It has no power to “do something” beyond that in terms of enforcement.

It CAN withhold money, but that’s about all.

It can’t even do that without 0bama closing down the government and putting the blame on it. People forget that the president is the third house of congress; congress can do nothing without his approval unless it has the support of 2/3 of each house.

actually, I’m pretty sure the house can imprison people for things like contempt (eric holder should have been marched to prison) and maybe perjury.

When you don’t use the power that you have, you’re going along with the game.

And they have a bit more power than the purse…

I have a lot of respect for you Rags, but you’re making excuses. If the deck is stacked, motivated people find a way to get it done unconventionally. They find the loophole. They enlist allies from those who can do what they cannot. They think outside the box. Collecting endless reams of incriminating evidence is pointless if you can’t harness that energy to action. The executive and the judiciary may be unwilling to help, but the world is not the three branches of federal government.

I used to believe that this kind of abuse of government power would have Americans marching in the streets. Where has America gone?

or playing with their damned smart phone or…

It should be noted that all this seems to have stopped in 2011, when the IRS scandal first broke, and Lois Lerner’s hard disk crashed.

If you think that. I have some ocean front property for sale in Arizona. The Odildo Administration has been auditing its enemies from day one. It will continue to do this until he leaves the White House, if ever.

I said they stopped.

By the time a Republican Attorney General might get an investigation rolling, the statute of limitations will have lapsed.

If they continued, they’d be risking falling under the statute of limitations, and new evidence would be created all the time..

I noticed in this story – nothing happened after June, 2011.

Audit every single Liberal in the country.

Including all the liberals in the Republican party starting with the ones running for office / reelection.