Rand Paul Burns it Down in Latest Ad

Rand Paul Burns it Down in Latest Ad

Oh, say, can you see…by the light of this massive bonfire! 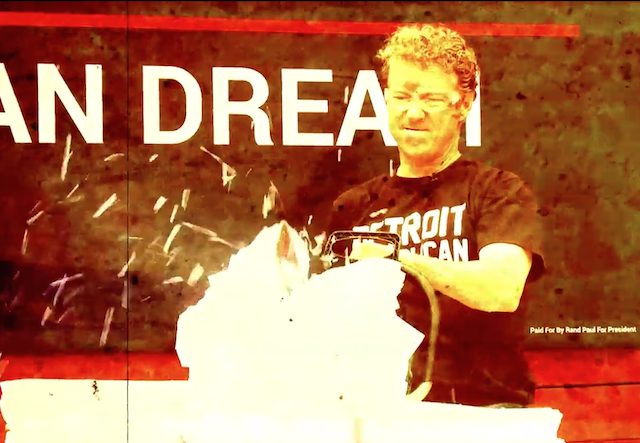 Who am I kidding? Americans are fans of all those things!

Let’s get right to it:

At about the 37 second mark, the video turns interactive, asking viewers which method they believe Paul should use to lay waste to a paper copy of the tax code: 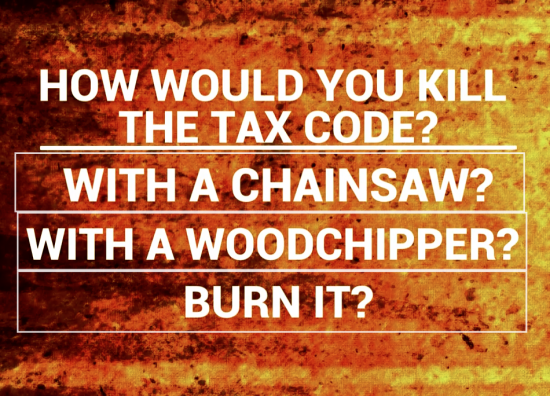 I picked “BURN IT,” because I’ve never been one to pass on a bonfire, and got kicked into this video:

I love this ad for the same reason I love shooting big guns, or watching movies about killer robots from outer space—it’s fun. Somehow, Paul managed to incorporate ridiculous power tools, fire, and wanton destruction into a slick, polished ad that isn’t off-putting and still manages to convey a message.

The message is the thing, though, and Paul is serious about the one contained in his ad. Via WaPo:

So far, tax reform has failed to conquer the imaginations of Republican primary voters. The issue might have become a victim of Republican success, from the Reagan tax cuts of the 1980s to the Bush tax cuts that have largely survived the Obama presidency. As Mitt Romney infamously told a room of donors, 47 percent of Americans pay no net income tax. The only voters paying higher income taxes since 2003 are the ones hit by the 2010 tax deal’s hike on income over $400,000. The average American’s income tax rate is only 10.1 percent.

Paul acknowledged that he was trying to start a fire, not just fan the flames. “It may not be a big issue, but we want to make it a big issue,” he said, describing his outreach to poorer voters in big cities. “If I’m not for cutting taxes, what do I have to offer them? I can say I’m for capitalism, and lower regulations, and that’s going to float everybody’s boat, but that’s a little bit of a multi-step argument. Whereas if I tell them I’m going to leave $5 million in their economy, that it’s not going to Washington, I think they can grasp that.”

This is an important pitch. The past few weeks have been dominated by the antics of Donald Trump, the controversy over debate night pecking order, and the disaster that is the Iran nuclear deal. Tax cuts, while important, have taken a backseat in the minds of voters who have now (perhaps for the first election cycle in quite some time) found themselves focusing on foreign policy as a primary issue, as opposed to domestic concerns.

We haven’t seen much from Paul—or Rubio, or Cruz, or Bush, for that matter; at least not on this level. This ad is the freight train Paul needed to inject himself and his policy proposals back into the limelight, and it might just work.

What say you? Is Paul’s latest ad an effective hook, or over the top?

Best to takeoff and nuke it from orbit, just to be sure.

Burning it is a good idea, but we need to do it in a Spectacular way! Load the whole thing into one of the rockets used for unmanned delivery to the ISS, and shoot the whole works into the sun.

Incineration by nuclear fire! Now that would be a fitting end to this monster!!

But better to repeal the 16th amendment and abolish the IRS.

American voters sometimes over correct for the perceived flaws of the last president. Obama’s 2008 campaign was all pretense and drama while warning that no one knew the real Obama went unheeded.

Best example perhaps is electing Reagan after Carter. I hope we have a ‘Reagan’ around because this is another election ripe for over correction.

There are damn few statesmen (statespersons?) in American politics anymore. Most seem like carnival barkers.

I know exactly what to do with the tax code: give it away.

Tell them it’s the secret to American success.

Let them use it. Let it destroy them.

Rand makes a very good visual point about the tax code in this ad, namely it’s huge size. Now honestly, most folks don’t have to wrestle with the whole thing each year but it’s still quite intimidating when you look at it like this. Who wants to try and tackle that thing year after year, especially since it keeps growing?

It’s over the top. Everyone knows he’s not serious. That’s wy it is over the top – to try to convince people that he means…something.

If he wants to gte rid of the tax code, he has to explain what he wants to replace it with. Is it:

A) Some form of consumption tax, collected by businesses or banks.

B) A much simplified and partial income tax code.

C) Just reduucing the revenue of the federal government.

D) Something else. (and there might be a few ideas)

If he says nothing about it, he’s not serious at all.

Maybe let is say, in one way or another he wants to get rid of the individual income tax, or at least the filing requirements.

Then he has to explain what are banks goinbg to use for income verification when it comes to making loans, especially mortgages. Or will they just have to get along without it?

One thing for sure – means testing mostly comes to an end.

Alternatives to the income tax (e.g. VAT, sales), a simplified income tax, but above all and especially a vastly reduced federal budget are all fine with me.

“It costs ten times more to govern us than it used to, and we are not governed one-tenth as good.”

“Noah must have taken into the ark two taxes, one male and one female, and did they multiply bountifully!”

“The difference between death and taxes is death doesn’t get worse every time Congress meets.”