“Why not Joe Biden?” 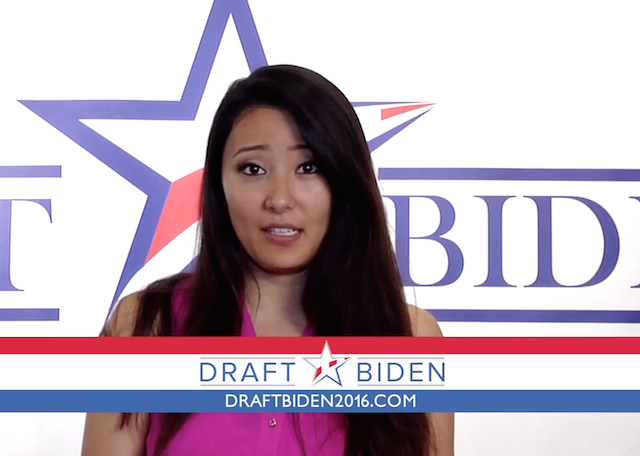 If you’re reading this article, chances are you’re not; but if you’re a Democrat, and you’re on the fence about who to support in the upcoming primary battle, there’s a super-PAC that would like a few minutes of your time.

The prospect of a Biden presidential run feels like a fever dream (or nightmare, depending on how easily amused by political theatre you are.) Since he first took his place as Vice President in 2009, Biden has defined himself not by savvy policy moves, but by behavior that likens him more to America’s Crazy Uncle Joe than America’s #2 Leader.

Still, his believers are out there in the form of the Draft Biden PAC, and they’re starting a major grassroots push aimed at convincing the Vice President to make a run for the Oval Office.

In terms of optics, they checked all the boxes: lots of young people, strong minority presence, all wrapped together with a social issue ribbon. It’s bland, but it’s also a hard sell—something that this particular PAC is relying on.

According to Draft Biden organizer William Pierce, the group isn’t putting any money behind promotion of the video, and is instead relying on a network of supporters to jumpstart and increase organic exposure.

In case you were wondering, yes—that’s code for “we don’t have enough money to buy ads for this.”

Lack of money is a problem, but it’s also expected at this point. The numbers aren’t exactly working in Biden’s favor at this point in the game. Via The Hill:

Hillary Clinton remains the front-runner in the race for the Democratic nomination, but recent polling shows Biden would have an impact on the contest if he were to run.

But the poll found Biden’s entrance would shake up the race.

Most of that additional support, 68 percent, would come from those who are currently Clinton supporters.

“Most people seem to be focusing on a Sanders surge among the liberal wing of the party,” said Monmouth polling director Patrick Murray. “But the bigger threat to Clinton may come from a Biden candidacy, where the two would be fighting for the same voters.”

The “shake up” is what this group is counting on—and what could give Hillary a run for her money if a grassroots push translates into a large enough movement to convince Biden to jump in.

I expect so. He has delusions of competency.

Entertained? Nonsense, the MSM will never publish or broadcast any of his many gaffs. It’ll be like 0bama all over again.

You may recall I predicted Biden would be the nominee weeks ago.

The reasoning was that Hillary is faltering under token opposition and her own corrupt history, Democrats cannot nominate her. Sanders is too old and too socialist, O’Malley has his dismal record in Maryland (and before that, in Baltimore), Webb isn’t far enough left.

Biden is acceptable to the far left, but has never alienated the Clintons. He has good name recognition, and is Obama’s loyal toadie. If they are going to lose, they will choose to lose defending Obama’s legacy.

And Obama will help them to do that in any way he can. Which means supporting Joe.

RE: “,,,,they will choose to lose defending Obama’s legacy.
And Obama will help them to do that in any way he can. Which means supporting Joe.”

PASS THE POP CORN! THIS IS GONNA BE SUPER SWEET!

I hear he wanders off a lot.

That is one of his most admirable traits!

O’Malley was already weak, and his campaign died over “All Lives Matter”.

Biden will take his turn on the catwalk.

If he doesn’t get any traction, Kerry will follow.

Obama is looking for his anointed successor. It sure isn’t Hillary.

Obama is looking for his anointed successor. It sure isn’t Hillary.

Are you ridin’ with Biden?

On reading that, I immediately flashed to that video of a cat riding on a turtle in someone’s living room, to the tune of “Ridin’ Dirty.”

Henry? Could you fetch me another iced tea?

Doesn’t that give you a strong need to take a shower to wash off the creepy when you hear that, Amy?

Biden/Clinton 2016! Because Three Boobs Are Better Than One!

Biden/Obama 2016! Because why make changes when you got a good thing going?

There’s a lot to like about Biden. He is clearly a decent man. His string of gaffes suggest ill health to me. While the Democratic Party really likes an incompetent in the Presidency, other people like an intelligent and honest chief executive.

Joe was gaffing and grabbing well before the brain tumor.

He plays a decent man on TV.

His biggest accomplishment in life is politicizing the Supreme Court.

Joe Biden was the ringleader behind Borking Bork and high-tech-lynching Clarence Thomas.

He is not a decent man.

These people are just dumber then dumb.

Fools on par with the zombie followers of the sleaziest of cults.