Pin the Tail on the Donkey

Pin the Tail on the Donkey

Examining the racist past of the Democratic Party… 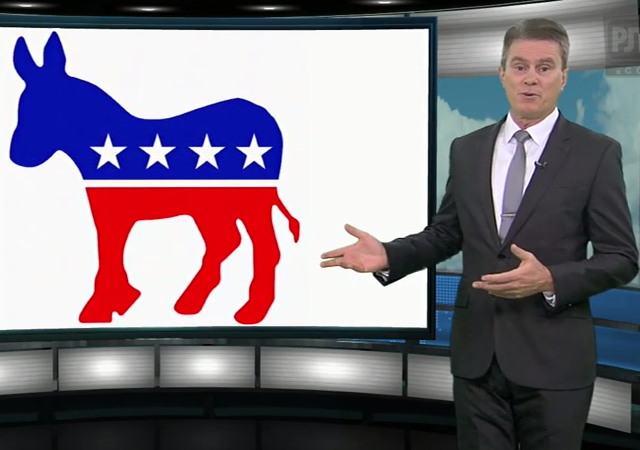 In the newest edition of Afterburner, Bill Whittle sets the historic record straight on the difference between Democrats and Republicans when it comes to racism.

The Republican Party was founded to end slavery while Democrats sought secession to preserve the practice. The Confederate flag, which is a big problem all of a sudden, was created by Democrats.

Walk up to any person in the street and ask them which of the two major parties created the KKK. The correct answer is the Democratic Party but sadly, I’d bet against the public answering that question correctly every time.

Have you ever been told the progressive myth that the parties “switched” at some point?

Whittle gets into all of this and walks you through history right up to the present day.

It’s thirteen minutes long, but you should watch the whole thing and please comment.

The only white racist I’ve known in my adult life was a colleague who was an aide to Fritz Hollings, a knee-jerk Deemocrat, and a great admirer of Dollar Bill Clinton.

Lol I thought you were going to say “the only white racist you’ve known” was OBAMA!

I’m fortunate enough to have known these truths he spoke. So do my kids.

While we’re at it:

“We should hire three or four colored ministers, preferably with social-service backgrounds, and with engaging personalities. The most successful educational approach to the Negro is through a religious appeal. We don’t want the word to go out that we want to exterminate the Negro population, and the minister is the man who can straighten out
that idea if it ever occurs to any of their more rebellious members.”

If Bill Whittle sets straight the historic record of the democrat party in the woods, does anyone hear it?…

Great stuff, but effectively preaching to the choir. Until the lame and corrupt GOP leadership is kicked out of the leadership positions they hog and replaced by fighters, messages like Whittle’s will remain in the woods, and unheard by the voters it needs to reach.

It’s our battle and way of life we are loosing. Judging by our tolerance of 3 Stooges Boehner/Prebus/McConnell, we are very tolerant of losing both.

In the spring of 1958 I was an 8th grader, having just moved from Niagara Falls, NY, to Ft. Rucker, Alabama, going to school in Ozark, Alabama. I quickly learned that the schools were segregated, and the black kids who were part of our gang on the army post went to a different school during the week. I also learned that the election for governor actually was the democratic primary, and that the so-called election in November was a formality. A super racist, Patterson I think, beat out an up-and-comer named George Wallace to capture the Democrat party nomination. There was no discussion of the Republicans.

The Republican Party was founded to end slavery

Not actually correct. For one thing, if it was, Lincoln wouldn’t have been a Republican candidate—hardly a trivial point.

What became the Republican party after a name change or two was founded to fight the Democrats over extension of slavery to the new territories opening up in the west. That’s it. (It should be enough …)

The Abolitionists were another bunch altogether.

The rest of Whittle’s history seems pretty solid. I particularly like his hat tip to Cool Cal, perhaps our most underrated—and almost certainly our least racist—President.

To be fair, it did “switch” for a while with The Progressive Party influence in the Democrat Party. The classical progressives had some worthy ideas to improve the general standard of living or “general Welfare”. Unfortunately, today, with their adoption of pro-choice doctrine, their descendents’ motives have been reduced to environmental stability in lieu of human and civil rights.

Selective-child, class diversity, and selective exclusion. The Democrats have not changed. Their principles are firmly stuck on negative progress.

That said, let’s see if the Republicans can do a better job of reconciling individual dignity, intrinsic value, economic principles, foreign relationships, and the natural order.

If anyone expects the GOP to in any way reconcile individual dignity, intrinsic values, economic principles, foreign relationships, and the natural order, they’re forgetting the 3 Stooges, Boehner, Presbus and McConnell.

The list goes on and on, but the point is to expect the GOP to do anything requiring guts and imagination is akin to expecting Al Sharpton to learn English; or the French to become an ally; or Michelle Obama to acquire taste; or Barack Obama to love America; or Hillary Clinton to know where she is; or the NY Times to tell the truth.

The GOP is on the same failing respirator as the Whig Party was in the 1860s. Contrary to the corrupt American media and the corrupt leadership of the GOP, the Tea Party is alive and well, and it will eventually eat the GOP’s lunch. And dinner.

If the Confederate Flag has to go, what about other offensive hold-overs, such as the National Association for the Advancement of Colored People?

How about the Congressional Black Caucus?

Can you imagine the outrage that would ensue if ever a Congressional White Caucus were formed?

Anybody ever heard of the Race Riots of 1898 in Wilmington, North Carolina? It was actually more than a riot, it was a flat out insurrection against the bi-racial power structure of the minority Whites who had aligned themselves with the Blacks in the pre-Jim Crow South. Oh, you say, I must be talking about the racist Republicans rioting to get rid of the benevolent Democrats because of their treatment of Blacks as “equals.” Well, no. Not exactly. It was, in fact, the exact opposite. The Republicans were in control of local government until 2,000 Democratic White Supremacists attacked Black neighborhoods in Wilmington and murdered up to 60 people, while burning down the local Black newspaper building.

“Democratic Party white supremacists seized power and overturned the elected government. Led by Alfred Waddell, who was defeated in 1878 as the congressional incumbent by Daniel L. Russell (elected governor in 1896), more than 2,000 white men participated in an attack on the black newspaper, Daily Record, burning down the building. They ran officials and community leaders out of the city, and killed many blacks in widespread attacks, especially destroying the Brooklyn neighborhood. They took photographs of each other during the events. The Wilmington Light Infantry (WLI) and federal Naval Reserves, ordered to quell the riot, became involved with the rioters instead, using rapid-fire weapons and killing several black men in the Brooklyn neighborhood. Both black and white residents later appealed for help after the coup to President William McKinley, but his administration did not respond, as Governor Russell had not requested aid. After the riot, more than 2,100 blacks left the city permanently, having to abandon their businesses and properties, turning it from a black-majority to a white-majority city.”