One Third of Vets on Healthcare Waitlist Already Dead

One Third of Vets on Healthcare Waitlist Already Dead 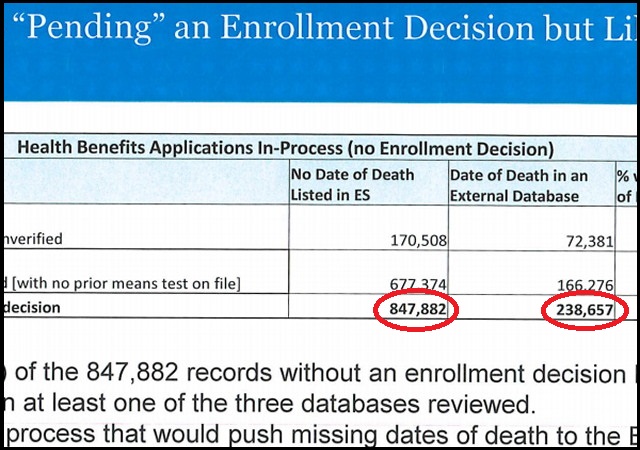 According to a document leaked to the Huffington Post, over 200,000 veterans waiting for healthcare have already died:

WASHINGTON — More than 238,000 of the 847,000 veterans in the pending backlog for health care through the Department of Veterans Affairs have already died, according to an internal VA document provided to The Huffington Post.

Flip to page 13 and you’ll see some stark numbers. As of April, there were 847,822 veterans listed as pending for enrollment in VA health care. Of those, 238,657 are now deceased, meaning they died after they applied for, but never got, health care.

You can read the entire document here, but as the Huffington Post mentioned, be sure to see page 13. (A screen cap of that page is featured at the top of this post.)

According to a related report from the Washington Free Beacon, officials at the VA are already spinning the news:

VA spokeswoman Walinda West played down the number, insisting that some of those listed as having “pending” status may well have not completed their applications for healthcare coverage and that the data could be decades old.

West explained that approximately 81 percent of veterans who visit the VA “have either Medicare, Medicaid, Tricare or some other private insurance … [and] consequently, some in pending status may have decided to use other options instead of completing their eligibility application.”

All of this comes on the heels of a report from the Associated Press which suggests that the VA may begin closing hospitals to deal with a budget gap:

The Department of Veterans Affairs may have to shut down some hospitals next month if Congress does not address a $2.5 billion shortfall for the current budget year, VA officials warned Monday.

The VA told Congress that it needs to cover shortfalls caused by an increased demand by veterans for health care, including costly treatments for hepatitis C. The agency also is considering furloughs, hiring freezes and other steps to close a funding gap for the budget year that ends Sept. 30.

Yes, any day now we’ll be seeing fawning MSM headlines about how the great Obama has reduced VA hospital wait lists by 1/3.

With no mention of how it was done.

I have been fighting the VA for over 11 years trying to get my full benefits. I think this is part of their plan, wait us out until we die. There’s more than one way to save money.

The Obama, Pelosi, Reid and Clinton “death panels” are already in effect!

Unconscious zombie-like bureaucrats and their utter denial of personal responsibility at every level will chokehold these brave survivors until they pass away…throttled by government’s ‘benevolent’ crushing hands.

Again, we see the VA being a perfect model for ObamaDoggle “health care”.

The health care system the Indians on reservations are plagued with is another.

Absolutely. Zero it out. Close it down. Nuke it from orbit, just to be sure. Give the veterans vouchers for civilian health care.

Illegal aliens in need of healthcare are a priority it would seem.

My nephew is a now medically discharged US Army 1st Lt who fell out of a helicopter during a training exercise. He’s been on a VA waiting list for knee and hip surgery for over two years.

It just breaks my heart how veterans are treated. This is Obama’s greatest betrayal.

Sure right up near the top. With so many, how does one chose…???

He should contact one of the veterans’ service organizations such as the VFW. If he was separated due to critical problems with both hip and knee, especially if more than one side of the hip or one knee is involved, he probably should have been medically retired vs discharged. That would make a difference in his status on the waiting list.

In any case he should be receiving VA Disability benefits, unless they are saving money by “forgetting” to tell him he is entitled to them and needs to apply since these aren’t automatic (another VA cost saving technique).

If you’re not already dead, they’ll make you that way. My father was “in the system” for years while they decided yea or nay on whether he had Parkinson’s (he did). While they were giving him the runaround on that and messing with his meds because of it causing him to deteriorate faster, the “Doctors that be” kinda forgot to tell him about the little notation in the margins of his chart. One day, a nurse asked him “So what are they doing about the cancer?”. He said “What cancer?”. The nurse got all red-faced and said “That explains why there’s no treatment plan listed here.”. He had had Esophageal Cancer for almost 2 years according to his chart, but no one had ever bothered to mention it to him. Lifelong heart disease didn’t get him, Parkinson’s had him bowed but not broken, but the system. The system killed him.

“I’m from the government, and I’m here to help.”

And the VA is, by design, “Single Payer” – THIS is what Americans have to look forward to if we get to that point.