“This deal is getting worse all the time.” 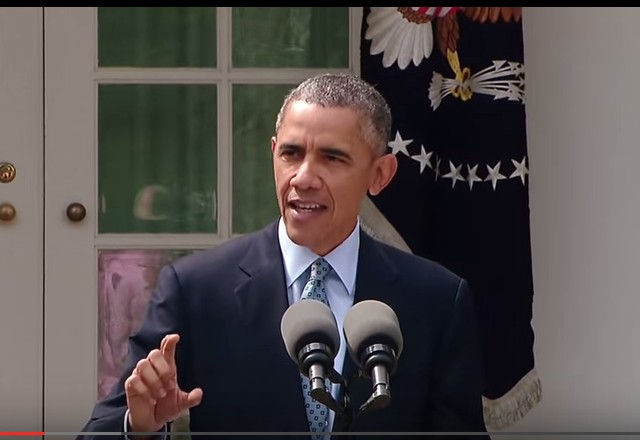 Two recent articles document the multiple American capitulations to Iran in pursuit of a nuclear deal.

The administration’s goal seems not to be preventing Iran from making a nuclear weapon but to making a deal.

Krauthammer summarizes how the administration backed down from inspections, Iran’s having to account for its past illicit nuclear research, as well as its generous application of sanctions relief. The matter of past nuclear work is necessary (and it’s something that Ayatollah Ali Khamenei refuses discuss) in order to know the full extent of Iran’s nuclear program. Here’s what happened:

Coming clean on past nuclear activity. The current interim agreement that governed the past 19 months of negotiation required Iran to do exactly that. Tehran has offered nothing. The administration had insisted that this accounting was essential because how can you verify future illegal advances in Iran’s nuclear program if you have no baseline?

After continually demanding access to their scientists, plans and weaponization facilities, Secretary of State John Kerry two weeks ago airily dismissed the need, saying he is focused on the future, “not fixated” on the past. And that we have “absolute knowledge” of the Iranian program anyway — a whopper that his staffers had to spend days walking back.

Not to worry, we are told. The accounting will be done after the final deal is signed. Which is ridiculous. If the Iranians haven’t budged on disclosing previous work under the current sanctions regime, by what logic will they comply after sanctions are lifted?

After the understandings about future negotiations were reached in Lausanne (a few days past the deadline) President Barack Obama boasted that the naysayers were wrong and that Iran had abided by the Joint Plan of Action (JPOA). However as Krauthammer noted, the JPOA required Iran to explain its past nuclear work. (There were other violations too.)

Lee Smith writing in Tablet earlier this week focused on the nuclear infrastructure that the emerging deal would allow Iran to maintain. Iran didn’t want ballistic missiles included in the negotiations – even those are the missiles that could deliver a nuclear device – so the administration took those off the table. Iran didn’t want to ship out its enriched uranium so the administration allowed it to reprocess it.

It used to be that the White House wasn’t going to let Iran enrich any uranium at all. As former National Security Council spokesman Tommy Vietor said in April 2012, “Our position is clear: Iran must live up to its international obligations, including full suspension of uranium enrichment as required by multiple UN Security Council resolutions.”

However the Joint Plan of Action in November 2014 acknowledged Iran’s right to enrich uranium.

It used to be that the administration said it would leave Iran with “no more than 1,500 centrifuges left operating.” But according to the parameters of the Joint Comprehensive Plan of Action: “Iran has agreed to reduce by approximately two-thirds its installed centrifuges. Iran will go from having about 19,000 installed today to 6,104 installed under the deal, with only 5,060 of these enriching uranium for 10 years.” As former deputy director-general of IAEA Olli Heinonen put it: “Six thousand operating centrifuges is—when looking from a technical perspective given the known enriched uranium needs of Iran—an excessive and odd number.”

The interesting thing about 6,000 centrifuges is that that’s a number that is sufficient to enrich uranium for a bomb, but not for a civilian nuclear program.

So whether it is Iran’s nuclear infrastructure that was developed in defiance of its nuclear nonproliferation treaty (NPT) obligations or the methods of verifying Iran’s compliance or the means to enforce Iran’s compliance with a future deal, the administration has retreated.

Krauthammer summarized the likely result of this retreat on all fronts, “Obama will get his “legacy.” Kerry will get his Nobel. And Iran will get the bomb.”

Despite all of these retreats, this still might not be enough for Iran. This week, Hassan Rouhani, Iran’s “moderate” president said that if there’s no deal, “we immediately go back to the old path, harsher than what they imagine.” Some have taken this as a veiled threat to develop a nuclear weapon. In any case Rouhani seems to be saying, “Pray I don’t alter it any further.”

It’s almost as if Obama is facilitating Iran’s development of a bomb. (One could probably dispense with the first four qualifying words of that sentence.) Instead of advancing American interests, he is subverting them, to the point of perfidy. And, in hindsight, one wonders if Obama failure to reach a “status of forces agreement” with Iraq was just a subterfuge for removing all our troops so Iran could become the de facto ruler of its neighbor.

We could have easily had a SOFA with Iraq.

We had them over the proverbial barrel and, to mix metaphors, had plenty of leverage to diplomatically twist their arms.

I don’t think we will ever know what his seeming acceptance of a nuclear Iran would achieve for the narcissist in chief unless if it was simply that Jarrett – the one who really wears the pants in the oval office – has promised him all the ice cream he wants if he manages to get a deal.

Alynski Rule No 6: Lie whenever needed. The worse, the better. Your supporters will love you.

I don’t remember who said it, but the thought was, “When you indicate to your enemy what you won’t do, that’s precisely what they need to do to defeat you.”

Obama says, basically, “We won’t force Iran to abide by any agreements.”

Iran says, basically, “We won’t force ourselves to abide by any agreements.”

Nothing can go wrong.