Offending Catholics okay because they won’t try to kill us. 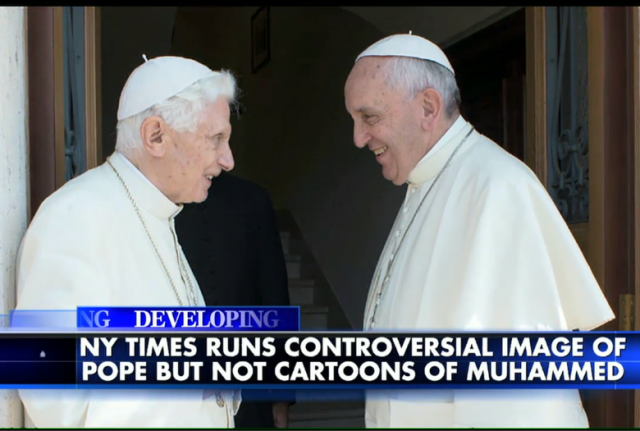 But The NY Times has no hesitation in publishing Condom Pope artwork, a portrait of the Pope composed of condoms.

The Times Public Editor Margaret Sullivan, who functions as a quasi-ombudsman, wrote how the Times Standards Editor responded (emphasis added):

The standards editor, Philip B. Corbett, fielded an inquiry about this from The Washington Examiner.

Here’s how he responded:

There’s no simple, unwavering formula we can apply in situations like this. We really don’t want to gratuitously offend anyone’s deeply held beliefs. That said, it’s probably impossible to avoid ever offending anyone. We have to make these judgments all the time. Reasonable people might disagree about any one of them.

I don’t think these situations — the Milwaukee artwork and the various Muhammad caricatures — are really equivalent. For one thing, many people might disagree, but museum officials clearly consider this Johnson piece to be a significant artwork. Also, there’s no indication that the primary intent of the portrait is to offend or blaspheme (the artist and the museum both say that it is not intended to offend people but to raise a social question about the fight against AIDS). And finally, the very different reactions bear this out. Hundreds of thousands of people protested worldwide, for instance, after the Danish cartoons were published some years ago. While some people might genuinely dislike this Milwaukee work, there doesn’t seem to be any comparable level of outrage.

The NY Times standard is clear, as Eli Lake noted:

Good for @Sulliview to do this. But real issue is that radical Catholics won’t kill artists who blaspheme the Pope http://t.co/RIhkUApVGt

Fox News pointed out that obvious hypocrisy and cowardice as well:

The NY Times should change its motto from “All the News That’s Fit to Print” to:

All The News That Won’t Get Us Hurt

The choice is simple…

Print stuff…all of the stuff…or…

You either believe in the “freedom of the press” or you don’t, and it’s really been apparent for a LONG time where the NYT stands.

For example, would the Times publish a condom “artwork” depiction of Mohammed, or of Mohammed’s mother, sister, or one of his wives? Would they publish a photo of the Qu’ran floating in urine or covered in feces? We all know the answer is no.

The problem for the Times is not their lack of a standard; it’s their blatantly obvious, and despicably hypocritical, double standard.

It really is that simple.

Fuhgeddaboudit, Observer. Muslims have been adopted as a client group of the Left. Hence, it is taboo to criticize them and their beliefs in any way. I’m sure the NYTimes editorial staff thinks that little Rifka Bary deserves to be running scared that her relatives will kill her for becoming a Christian because she chose the religion that all right–oops–Left–thinking people abhor as the catspaw of colonialism, reaction, and sexism.

Come to think of it, I wouldn’t be surprised that someone in the bowels of the NYSlimes thinks that the Assyrians of Northern Iraq and the Armenians are Christians because nefarious British, French, and American colonialists converted them at gunpoint.

In 2012 they were running numerous articles wherein the authors were justifying a U.S. dictatorship as being just ducky!

While some people might genuinely dislike this Milwaukee work, there doesn’t seem to be any comparable level of outrage.

Is that an invitation or a dare? If that’s what it takes to get them to take Catholics seriously, maybe they should take him up on it.

“Also, there’s no indication that the primary intent of the portrait is to offend or blaspheme”

Whudda you gonna do….. bingo their asses to death?

There is that word gratuitous again. It is used as if folks are mocking some hapless soul suffering from mental retardation, out of some sort of unrestrained evil intent.

Just because Muslim supremacists use violence to impose their political demand of total domination does not mean they should be exempt from the kind of caricatures we dream up for the likes of George Bush. Assertive Muslim are politicians, and as such deserve heightened mockery (if not jail time followed by expulsion for propagating the inherently violent seditious Islam).

Gratuitously yielding to their Sharia commands only emboldens them, sort of like giving aid and comfort to a mortal enemy.

All The News That Won’t Get Us Hurt

Had to chuckle over the “Johnson piece” made up of condoms.

Just how many parakeet owners does it take to keep the NYT in business?

Somehow, this seems to be a teaching moment. I wonder what lesson they are, intentionally or not, teaching those who are not Leftists, Muslims, or other enemies of the country?

“it’s probably impossible to avoid ever offending anyone”….

But they sure manage to avoid ever offending Muslims. Funny how that works out.

If they really want to raise social questions about the fight against AIDS, let them promote a campaign against buttsex. Simply using the plumbing in accordance with its design is a lot easier and more effective than using a stupid rubber ~

Have to wonder if the NYT realizes that Muslims don’t care in the slightest whether some alleged offense or “blasphemy” was intentional.

Furthermore, can one intentionally “blaspheme” a personage that one regards as nothing more than a human being — and a quite nasty one at that?

The NYT customer base is shrinking rapidly. So, NYT desperately needs subcribers to the National Conspirator pulp they produce.