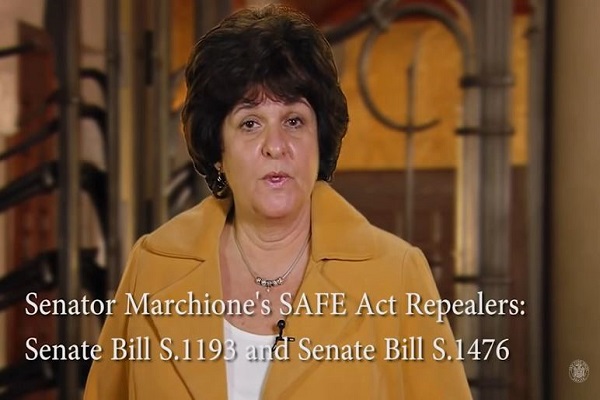 New York’s unpopular SAFE Act takes another hit this week as Cuomo suspends a plan to require background checks for the purchase of ammunition.  The New York Times reports:

The decision, which the administration did not publicize, was the result of an unusual deal the governor’s office reached with the State Senate’s Republican majority. The Senate’s Democratic minority and the speaker of the State Assembly condemned the move.

The background-check system was approved as part of the Safe Act, the set of tough gun control measures that Mr. Cuomo, a Democrat, persuaded lawmakers to pass in January 2013, shortly after the mass school shooting in Newtown, Conn.

Apparently, the suspension is based on the lack of an acceptable database:

On Friday, a top aide to Mr. Cuomo signed a memorandum of understanding suspending the portion of the Safe Act related to the background checks. The memorandum, citing “the lack of adequate technology,” said the database “cannot be established and/or function in the manner originally intended at this time.”

The document was signed by the governor’s director of state operations, Jim Malatras, and the Senate majority leader, John J. Flanagan of Long Island. “This is a clear victory for Second Amendment rights in New York,” said Senator James L. Seward, a Republican from Otsego County, who was one of a number of Republican senators who publicized the agreement.

That the state of New York cannot, in two and a half years, develop a working database should surprise no one; after all, look at the ObamaCare website debacle the feds accomplished in a similar time frame.

Ironically, NY Democrats are suddenly opposed to changes made to laws based in executive orders and administrative action.  The NYT continues:

Democrats in the Legislature criticized the agreement. The Assembly speaker, Carl E. Heastie, a Bronx Democrat, said it was “an ill-advised end run around the Legislature and the Safe Act.”

“I did not participate in this ‘agreement’,” he said. “The law may not be ‘suspended’ by a memorandum such as this. I believe the law should be followed and implemented as intended.” A spokesman for the Senate Democrats, Mike Murphy, called the agreement “outrageous.”

“On first read, this appears blatantly unconstitutional,” said Senator Michael N. Gianaris of Queens, the deputy minority leader. “The notion that one house of the Legislature will have greater powers than another, and the governor, with one house only, can agree to change state law, turns our democracy on its head.”

It’s kind of hard to take this outrage seriously given the absolute silence from Democrats in NY (or anywhere) about Obama’s similar end runs around the legislative body.

This push to require background checks for ammunition is yet another transparent attempt to make gun ownership onerous and costly.  We are seeing similar moves in Seattle, for example, where there is a push to tax guns and ammo.  A similar measure was passed by the California senate in 2013.

If the gun grabbers can’t repeal the Second Amendment or get laws passed to infringe on our right to bear arms, they’ll simply tax guns and ammo until we can no longer afford to buy guns or use the ones we have.  At least that is their hope.

As NY is learning, however, even passing a law will not always work.  Not only is the governor changing it to make it less onerous, but the people of NY are engaging in civil disobedience by not complying with the law’s gun registration requirement.  Indeed, even NY law enforcement are vocal about their decision not to enforce the SAFE Act.

Suspending the background checks for ammo purchases is a smart move, and not the first, I hope, toward dismantling it completely.

State Senator Kathy Marchione is leading the charge to repeal the SAFE Act:

The numbers show the vast majority of firearms owners have decided they’re not going to comply with the registration portion of the SAFE act. Most of law enforcement isn’t interested in expending any time or energy in this issue so you’re left with a bunch of democrats in Albany whining because the “little people” aren’t obeying them.

What you call whining I call the sweet sounds of a harp. Would that we hear much more of it, across the land.

Wake me up when they actually know how the 2nd Amendment isn’t supposed to be infringed.