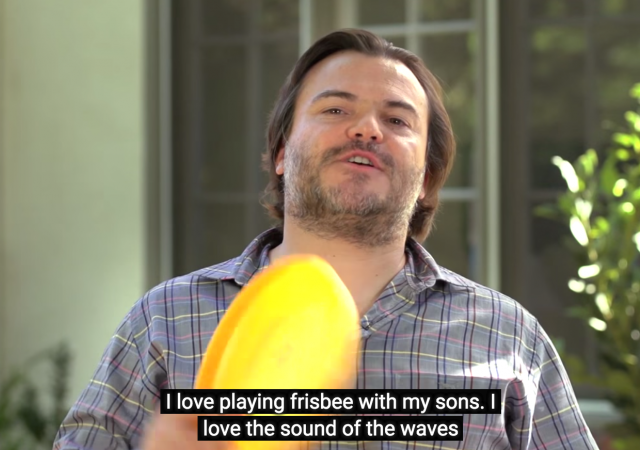 You know what I always ask myself when considering my stance on any hot-button piece of legislation, particularly matters of national security? Gee, I wonder what Hollywood thinks.

Except I don’t do that because I have a brain. One that I enjoy using.

But there must exist people who demand Hollywood’s expertise on matters of national importance or videos like this one wouldn’t exist.

Utilizing one of the most annoying video formats in existence, various celebrities work together to complete a sentence. Like this one:

“I love playing frisbee with my sons. I love the sound of the waves on the Pacific at sunrise. I love curling up with a good book. I love to see my grandkids smile. But if Congress sabotages the nuclear deal with Iran, we could be denied the very moments that make our lives worth living.”

But it gets better, and by better I mean it quickly morphs into an intellectually and factually vacuous black hole:

“Why? Dude, cuz we’d be dead. Super dead. Like, totally fried by a major nuclear bomb dead. I won’t be able to play frisbee with my sons because there won’t even be a frisbee. The frisbee will be melted. We will be melted. Or worse… toasted? Yes, Natasha, but most people think toast is delicious. This would not be that kind of toast. It would be like a really dark unpleasant cloud of death toast.”

Video in its moronic totality here:

I get it. It’s supposed to be funny, light-hearted, provocative, and all that jazz. And it might have been funny if it wasn’t stupid.

To act as though we’re all going to die if Congress doesn’t stop Iran from getting a nuke in 10 years plus tens of billions to fund terror until then?

Hard to think of something lamer than the ignorance it takes come up with that completely false argument. It’s also really cute that they’re pretending Congress is the problem with Iranian nuclear talks.

Then again, this is Hollywood we’re talking about.

Iran and ISIS agree. Hollywood’s on the top of their Nuke List.

Thanks for watching this propaganda Kemberlee, so we don’t have to waste any of our life on it.

“Remember folks! Report any friends, family, neighbors, or anyone who freely watches it!” – Your Democrat-Communist Community Patrol!

Jack Black is one of those people I’d just have to beat into a greasy spot on the sidewalk if I met him on the street.

Call it a flaw…

Pandering to the lowest and greatest unwashed.

Do they really think any mature adult is interested in the opinions of people who play dress up and make believe they’re someone else?

To steal a quote from a friend, why would you ask anyone who plays dress-up for a living their opinion on politics?

But there must exist people who demand Hollywood’s expertise on matters of national importance or videos like this one wouldn’t exist.

It’s called – egos the size of the state of California.

Alfred Hitchcock, who would have known, said it best perhaps, “You must treat actors like cattle.”

You gotta love these clowns as they push Obama’s lie that our “only other option” would be a war with Iran.

The worst part is that a nation of morons will believe the lie.

Which I don’t think Obama is saying.

According to this “Daisy” ad, this agreement is the only thing preventing Iran from delivering a nuclear bomb to, say, Valencia, California.

According to Mike Huckabee, it’s accepting the agreement that will result in Iran using an atomic bomb, but the venue is somewhere in Israel.

President Obama criticized the second comment; it would seem he should be asked about the first one, too.

They’re buying a nice fleet of refueling aircraft from Putin. I suspect they figure they could make it to the US. Truth is though, all they need is a few small ones that could be hidden in cargo pods until close enough to launch.

Why they could hide them anywhere on any illegal alien – even the one in the White House! Snark Snark!

It will be a very, very long time before Iran can deliver a nuke to the US via missile or aircraft, if ever. It would be less difficult to hide one in a shipping container.

I suspect that wouldn’t be necessary. All Iran has to do is demonstrate that they have a working bomb (unlike the Norks) and the usual suspects will melt down.

My wife and I are talking about each giving $1000 to the IDF to be used in the war against Iran. We will have separate letters detailing our respective restrictions. I would like my $1000 to go to the nuclear bunker busters necessary to take out Fordow. My wife wants to give the IDF more freedom of movement. Obama is not going to give Israel a single dime for this cause, but Americans individually could give small amounts that could add up to millions to support her. Somebody with a lot more organizational skills than myself should get this going. America could privately finance the destruction of Iran right under Obama’s nose.

Put them all together and what do you get? Still no talent!

Ah, crowd funding a war… Original. Actually, how about a lottery…winner secretly flown to secure site to push one of the buttons to fuse Iranian sand.

That video is lame. I’m really embarrassed for them.

Kinda makes me yearn for the days when Carter was asking his daughter for foreign policy advice.

Oh and that crap at the end about “love their children too”. It was crap when Sting did it about Russia and it is crap now about Iran. It is actually worst about Iran. The Russian people did and do love their children but the folks in charge of Russia at that time thought that they had a real chance to best America and as long as they and their own children survived, all is good. In the case of Iran, they actually believe that dying in the service of killing infidels (us) is a “very good thing” and it would actually make them martyrs so using that line in connection with Iran is extra, double stupid and shows how little of the world these clowns actually know.

You can smell the smug all the way over here on the east coast!

Actually most Iranians are under 30, and aren’t fanatics. While they don’t like their government very much, they’re not interested in a civil war.

So let me get this straight — we have nothing to fear from Iran and can trust them because “they love their children too”, but if THIS particular deal isn’t rushed into passage exactly as written RIGHT NOW, we’re all going to die in the flames of nuclear bombs in the very near future?

The phrase “cognitive dissonance” seems completely inadequate to describe this kind of bipolar whipsaw within the span of a few dozen seconds, especially when delivered with a weird smirk and comedic cadence overlaid with an insincere “hey buddy” tone.

This is your brain on leftism.

sheesh! Now I have to add Jack Black to my list of actors whose movies I won’t see (Morgan Freeman was already on it). Maybe I should just keep a list of actors I still like — that list is a lot shorter.