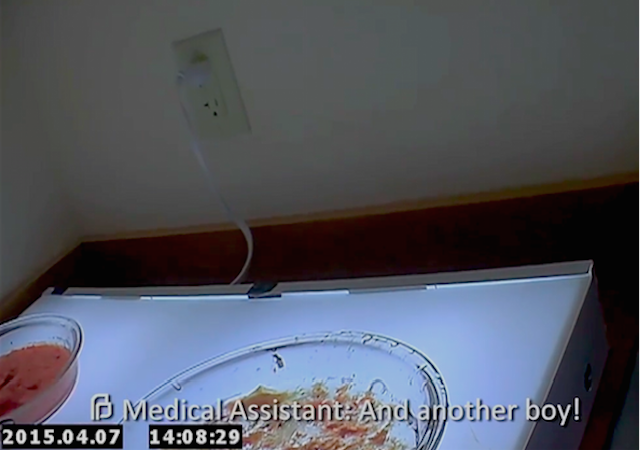 This week, the Center for Medical Progress released its fourth Planned Parenthood sting video. This video, like those before it, shows undercover activists teasing out evidence suggesting that Planned Parenthood is in the business not only of providing abortions, but selling the resulting “fetal tissue” for profit.

Like the three previous releases from the Center for Medical Progress, the latest video contains accusations of illegal and unethical activity: First, it argues that Planned Parenthood profits from compensation as part of fetal parts donations; and second, that clinics may alter procedures to provide more intact specimens, in violation of established ethical standards for fetal parts collection.

“We have to kind of see the baseline of how things are getting extracted now and see if we can do any work with them to maybe be more gentle,” Ginde says in the video. She adds that the clinic has little control over whether specimens come out intact or not, but adds, “Sometimes, if we get, if someone delivers before we get to see them for a procedure, then we are intact.”

In another portion of the video, the undercover actors are allowed to observe the specimen collection process inside a Planned Parenthood clinic. “Do people do stuff with eyeballs?” Ginde asks the undercover actor. Later, a medical assistant notes that a specimen is “another boy.”

I don’t have any adjectives left to describe how awful this is.

Democrats, of course, are circling the wagons around their pet organization. The White House has called CMP’s video evidence “fraudulent,” and President Obama has promised to veto any efforts to strip funding from Planned Parenthood. More via the Washington Times:

Congressional Democrats said they’ll block any bills that remove money for the organization, and with the White House rising to defend Planned Parenthood, the stalemate could result in another showdown similar to the 2013 fight over Obamacare that left the government shuttered for more than two weeks.

“Democrats will unite against it. This is a Republican path to shutdown,” said Sen. Charles E. Schumer, New York Democrat, insisting the GOP will bear the blame.

Planned Parenthood has denied wrongdoing, and the White House rose to its defense Thursday with press secretary Josh Earnest calling the videos misleading because they were likely heavily edited.

“There’s ample reason to think that this is merely the tried-and-true tactic that we have seen from extremists on the right to edit this video and selectively release an edited version of the video that grossly distorts the position of the person who is actually speaking,” he said.

He added, “Based on the essentially fraudulent way in which these videos have been released, there’s not a lot of evidence right now that Planned Parenthood hasn’t lived up to” its ethical standards.

When it comes to popular activism, then, what’s the standard for determining what’s worth listening to, and what’s hacktivist spin?

The answer is, there is no standard.

The next fight will come in the form of a restraining order preventing CMP from releasing more videos featuring employees from StemExpress, who starred in previous CMP-released videos. We’ll keep you updated on the legal battle.

@Students4LifeHQ said he deserves a name: “Call him Emmett”

On August 22, there will be a nationwide rally/protest at all Planned Parent facilities.

@Students4LifeHQ will be praying for Emmett on Aug 22nd http://protestpp.com as we show up to stop #AnotherBoy from dying!

“another boy” mutilated for the ‘good’ of the collective. Just think women’s genitals are being mutilated in non-Christian countries at the same time!

Socialism- the “village” wherever-is autocratic, terrorist and terrifyingly evil in its indifferent banality. The ends discard the means.

“There’s ample reason to think that this is merely the tried-and-true tactic that we have seen from extremists on the right to edit this video and selectively release an edited version of the video that grossly distorts the position of the person who is actually speaking,” Josh Ernest said.

Since when is it ANY business of a “White House” spokesman to say such a thing?

I mean, apart from the fact is is all a total lie.

RE: “The next fight will come in the form of a restraining order preventing CMP from releasing more…” But any other group could still release them and should if the happens.

Isn’t it interesting that it’s the “extremists” who are doing the undercover video and not the butchers who are pushing around body parts and declaring “It’s a boy”?

It bears remembering that Barracula was one of the sole hold-outs in the Illinois legislature against a “born alive” protection bill.

He is the most radical “kill the mistakes” person to ever come near his office.

Obama is still watching the Benghazi video. Any statements from The White House must be considered unreliable and prejudiced.

Cecile the Abortionist offered no comment before racing away in her new car.

Why are people tempering their outrage based on whether or not PP is selling the dead baby parts “for a profit”?

I don’t care if they are giving away these mutilated baby parts for free. This is abhorrent and disgusting. However, the fact that PP is making money on this is sickening.

It’s the entire abortion culture displayed for all to see: Pretend that nothing that the abortionists do involves a human person.

The people defending Planned Parenthood aren’t watching the videos. They’re defending PP solely on the basis of their pre-existing support for abortion in general. They feel like if it isn’t illegal, then there’s nothing wrong with it and they give it no more thought.

Also, one of the things I don’t get is PP defends the money exchange by saying it is reimbursement for expenses related to the donation. Defenders often cite medical tissue transportation costs…but PP isn’t transporting any tissue, they’re selling it from their facility to a middle man service. So what exactly are their expenses that they’re getting reimbursed for?

Yeah, more lies. If they were simply reimbursed for handling costs, certain body parts would not garner significantly more revenue than others.

Just another day in the Abortion-Industrial Complex™.

I’m not a squeamish person, but seeing them sort through the fetal body parts is pretty damned disturbing. The “Another Boy” comment was just over the top. I mean, my god.

Not to defend anyone at Planned Parenthood, but c’mon people – a Mercedes Benz is expensive.

And a Lamborghini even more so.

Yes, perhaps the ghoul should have said “it’s another clump of cells that might at some point in the future have chosen to self-identify as male . . . .”

This is just outrageous…

On this one, we’re in complete agreement. .

We most often are, Amy.

Get a room you two!

I’m hoping CMP gave the videos to other organizations that aren’t under their restrictions. If they saw this coming down (and really, who didn’t?) the smart move would have been to disseminate the video to multiple organizations and let the courts play whack a mole after the fact.

$230K is a modest price for a judgeship. What would Hillary charge?

Think of the visual if the babies faces were blurred in the videos with a banner running saying blurred to protect the innocent’s identity.

I’m having trouble understanding how Planned Parenthood got lured into so many hours of discussion on this topic if, like they claim, they had no interest in making money off fetal body parts. If they wanted to provide body parts to a company that procures them to then distribute to researchers, tell the procurement firm you will send them on ice each intact aborted fetus (about 10% of their business as I recall), then bill the procurement firm the cost of shipping plus 10% to cover PP’s handling costs. The procurement firm can sift through the cadavers for harvestable tissue, and PP’s effort is minimized, allowing them to focus on doing abortions. If PP were playing by the rules it would not be hard to knock out a workable arrangement.

Of course, the videos show that PP is not working within the rules. They are seeing that it is to their benefit to increase their rate of intact fetuses well beyond 10%, so that they can harvest up to $200 per corpse, which seems well beyond any handling cost incurred by simply bagging, icing, and shipping.

Here is an in-depth discussion of the legal issues surrounding these videos:
http://popehat.com/2015/07/30/l-a-court-prohibits-center-for-medical-progress-from-publishing-some-undercover-materials-about-abortion/

Would like to hear from the lawyers at LI about these.

Some have suggested
– CMP release the videos through Breitbart London or another group out of USA.

– Let the videos be leaked, hacked, claim release was ‘out of their control.’

– Release of videos is not suppressible because of implications of crime involved.
However, through the years, Lila Rose has caught PP breaking the law on video without any lasting legal repercussions to PP. They always claim one individual committed error and was not indicative of PP policy. That is because PP is VERY well connected. Same this time around.
* Current president of PP was once Pelosi’s second chief of staff and has visited the WH 39 times since Obama was put in office.
* Bill Gates father was president of PP
* Boehner’s health adviser’s sister is head of the stem cell company that buys human baby parts from PP
*Hillary, Obama, Pelosi and other powerful politicians have been recipients of PP’s highest award named for racist eugenicist Margaret Sanger.
*politicians keep money flowing to PP and PP keeps money flowing back to politicians, then politicians keep market high for baby parts through government research grants.

RE: the web of political connections to PP:

Dyer founded her biotechnology company in Placerville with only $9,000. Four years later StemExpress, which provides human blood, bone marrow, human primary cells and tissue for medical research, ranks No. 363 on the Inc. 500 list of fastest-growing private companies, with 1,315 percent growth over a three-year period.

Her sister is Charlotte Spears Ivancic who works for John Boehner as a staffer. She previously worked for Paul Ryan and Jim DeMint and Nancy Pelosi.

So we need a statement from John Boehner, Paul Ryan, and Nancy Pelosi immediately condemning these sales of tissue and body parts by Planned Parenthood and promising to take action by the Govt to prevent this from happening ever.”
LINK

“How does someone work for DeMint and Pelosi in one lifetime?”, asked someone in response to this revelation. Proof of how the two parties have melded into one corrupt political cartel – that have enabled every one of Obama’s foul initiatives.