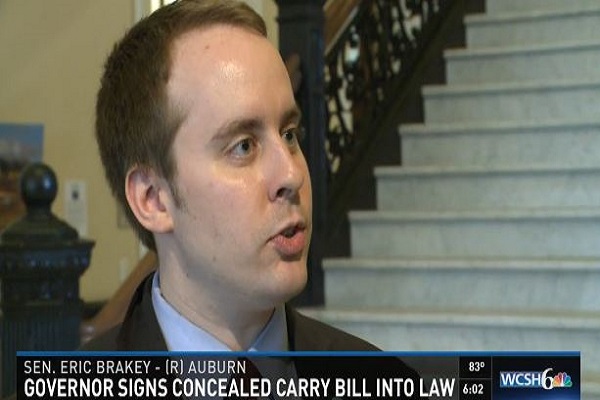 Constitutional carry is the means by which Americans are pushing back against government interference with their right to bear arms.  By eliminating the permitting process, Maine has passed a constitutional carry law that makes it legal for residents to carry concealed without a permit.

Maine will allow gun owners to carry concealed weapons without a permit, a practice called “constitutional carry” by Second Amendment advocates, under a bill signed into law on Wednesday by Republican Governor Paul LePage.

The measure will make Maine the fifth state to pass a law legalizing the carrying of a handgun, either openly or concealed, without the requirement of a government permit.

More than a dozen other states have considered similar legislation.

The Maine law will take effect 90 days after the state’s legislature adjourns, which is expected in mid-July.

My personal favorite sentence from the Reuters’ piece:

The Second Amendment of the U.S. Constitution, which protects the right of individuals to own and bear firearms, has limited efforts to pass gun control legislation around the country and has served as the basis for expanding gun rights in many states.

Both the NRA and the NAGR (National Association of Gun Rights) have released statements praising the new law.

The National Rifle Association (NRA) celebrated the move as “another victory for gun owners.”

“Maine now joins an ever-growing number of states in passing permitless carry,” executive director of the NRA’s Institute for Legislative Action Chris Cox said in a press release. “Despite the best efforts of Michael Bloomberg-funded groups to distort the truth, the Maine legislature and governor stood strong for freedom. It’s encouraging to see a governor stand up for the rights of their constituents, instead of caving to the demands of an anti-gun billionaire from New York City.”

“On behalf of the NRA’s five million members, we would like to thank Gov. LePage, Senator Eric Brakey, and the House and Senate leadership for their work in pushing this legislation through.”

The National Association for Gun Rights (NAGR) also celebrated the new law. “We’re very pleased the governor signed this landmark pro-gun bill,” NAGR president Dudley Brown said in a release. “We would like to thank pro-gun State Sen. Eric Brakey for sponsoring this bill, and we’re especially grateful to the NAGR members and supporters who took action to support this bill.”

“We are so excited that both Kansas and Maine passed constitutional carry this year,” Brown said. “This is a first that all pro-gun people should be proud of.”

A gun is a tool with multiple uses, not the least of which is as a force equalizer for purposes of self-defense. We should not acquire a habit of predicting intention. If we did, then we would also ban scalpels, vacuums, etc. based on the presumption they will be used to terminate a [wholly innocent] human life (one of millions annually).

Oh well, such is life on the frontier of human behavior!

Get ready for an outbreak of cognitive dissonance.

Maybe we should ask Maine to consider operating a camp for wayward Chicago thugs. Sort of a re-education camp.

It could skyrocket some (it’s around 22 homicides a year) and still be low. About half of them are losers shaking their girlfriend’s kid to death, anyway.

But it probably won’t.

I bet the delinquent moose population is experiencing a “pucker moment”, though.

You got that right Henry. Just like when Florida passed that there SYG (Shoot Your Gun) Law. Gunfights in the streets, death and mayhem…

It is interesting to me that the Portland Chief mentions cars and license tests. When traveling between my homes in New Hampshire and Florida, my freedom is for the most part of the trip in jeopardy. My NH resident Pistol and Revolver license gives me reciprocal rights in Fl, Georgia and North Carolina. However, in South Carolina, Virginia, DC, Maryland, Delaware, New Jersey, New York, Connecticut, and Massachusetts I am fair game for every cop in or out of uniform along the way. Not only are my guns against the law, but so are my magazines and abundant supply of ammo.
It seems to me the since most of my insurance policies and licenses allow me to freely travel and take my coverage thru any state in the union my CC permit should also allow me the same protection. Any police officer or political office holder who can’t or won’t look at my two page firearms CV and conclude that I am of good and safe moral character is a coward and should be shamed out of office. Apparently one jurisdiction can’t even trust the judgment of another department so what it comes down to is “Control” of the minions. Thay seem to almost all agree that their moral right is to control the masses.
A firearm is a tool much like a shovel or a fire extinguisher. Used as a bludgeon all three can cause injury and death. Why should my right of self defense be restricted by anyone?

I generally agree, but you’re kicking against the pricks here, Rick.

And these particular pricks are the democratic processes in the various states.

And, yeah, they DO have the right to “control the masses”, because they were elected by the masses and are sustained in office by the people.

But we can take heart that things are changing, and not really slowly changing at all. One day, we hopefully will have rational firearms laws that are uniform across the states.

Is there any kind of argument in the Constitution’s article four? The article 4 section 1 ‘full faith and credit’ respect part. Or section 2 – ‘The Citizens of each State shall be entitled to all Privileges and Immunities of Citizens in the several States.’

I say, “YES!”. But those are cases that yet need to be brought.

There are arguments (and good ones) both for and against the “full faith” doctrine WRT gun laws. I, for one, would not care to have Massive-two-spits health care law imposed on us here in Texas by their citizens passing through my state, for instance.

This is, of course, one of the cons of being a good federalist, but one I am happy to accommodate.

Of course, I COULD (and DO) argue that the whole muddle can be dealt with by good LEOs and prosecutors who look at someone like Rick and simply recognize they are no threat to anyone in their (benighted) state and concentrate on real threats. But I am a cock-eyed optimist…

Thanks for the reply. I’m with you there.

The easing of firearms restrictions will only come about when the weakest among our population demands reform. There is a growing appeal for firearms at this moment in time for women. They realize that their physical disparity puts them at great risk. Since my very early days (late 70,s) as an instructor I have focused on women groups and individuals. I have found that women living alone and with children take protection quite seriously. The game changer is the children. A frequent scenario I have poised to them is diabolically simple. I have your child in a headlock / choke hold. I tell them that I will break the child’s neck when I count down from five to one and then kill him/her. Ninety eight of 100 women say they will pull the trigger on me. Most people have never met a bad person who would do something like that. I have ten grandchildren. Six girls and four boys. Everyone of them will be trained in firearms and safe handling of them. Each and every one of them have been instructed to peruse my gun safe inventory and make their future selections. I refuse to raise victims in my family.

“People who object to weapons aren’t abolishing violence, they’re begging for rule by brute force, when the biggest, strongest animals among men were always automatically ‘right.’ Guns ended that, and social democracy is a hollow farce without an armed populace to make it work. Wear a gun to someone’s house, you’re saying, ‘I’ll defend this home as if it were my own.’ When your guests see you carry a weapon, you’re telling them, ‘I’ll defend you as if you were my own family.’ And anyone who objects levels the deadliest insult possible: ‘I don’t trust you unless you’re rendered harmless’!” — L. Neil Smith, http://www.jpfo.org/