Kim Jong Un just had the best election ever

Kim Jong Un just had the best election ever

Glorious day for Dear Leader…or else! 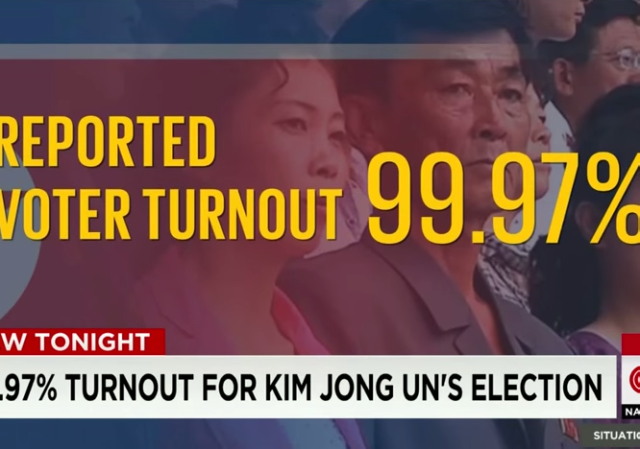 The people of North Korea care very deeply about their civic duty to vote…if they know what’s good for them. The dictator-ruled country had an election this weekend and 99.97% of the people voted; but choice had little to do with it.

Not only did people have no choice in whether or not to vote, they didn’t even get a choice on the ballot. CNN reports:

Citizens forced to vote in North Korea’s version of democracy

It’s called the Democratic People’s Republic of Korea. But any real notions of democracy end with the name.

North Koreans headed to the polls at the weekend to cast their ballots in elections for local representatives on provincial, city, and county People’s Assemblies.

Citizens were not asked to make a choice — the results had already been decided by Kim Jong Un’s central government.

Voters were handed ballot papers but didn’t mark them. They would have instead deposited them in a ballot box, signifying their support for the pre-approved candidates.

Do you remember who floated the idea of mandatory voting in America back in March?

In a recent speech, President Obama endorsed the idea of making voting mandatory. It isn’t clear whether he intends to actively push the idea. But he does suggest that it would be an improvement over the status quo:

President Obama on Wednesday suggested that if U.S. voters want to counter the outsized influence of money in politics, it might be a good idea to adopt mandatory voting.

“Other countries have mandatory voting,” Mr. Obama said at a town hall-style event in Cleveland, Ohio, citing places like Australia. “It would be transformative if everybody voted — that would counteract money more than anything.”

You may also recall that certain precincts in Philadelphia and Ohio reported zero votes for Mitt Romney in the 2012 election. Here’s a reminder from The Blaze:

Mitt Romney’s demographic troubles have, by this point, been well-rehearsed by practically every pundit across the political spectrum. However, even in his most troubled demographic (black voters, where Romney was trounced 94-6), the GOP nominee could probably comfort himself that at least – contrary to some polls – he didn’t get 0 percent.

But what if there are parts of the country where Romney not only got zero percent of the vote (a possibility in the case of vote totals so small that rounding renders them null), but actually got literally zero votes? For the nominee of a major party, that would be truly extraordinary – so extraordinary, in fact, that it would strain credulity.

That .03% that did not vote for Kim will be executed by anti-aircraft gun later today.

Wow. That rivals some of the neighborhoods in Philadelphia…

North Korea relies on primitive paper ballots. With a properly set up electronic registration and balloting system, it’s possible to vote with so little effort that a voter might not even be aware of having voted. It’s much more efficient that way.

The system you describe is in place in Maryland, where the Democratic legislature ignored the recommendations of its technical advisors to spend 900M to replace a paper-ballot plus counting system that had recently survived a post-election audit.

Any state that has had a single party in power for decades is likely to be corrupt. Maryland is one, California is another. I know this because I have lived in both states.

While single-party rule encourages and enables corruption to flourish, my experience is that corruption itself occurs due to another political feature which acts like a Petri dish for it.

What? Obama is still screeching “I One!”

Oops! You meant another ugly dictator……

NORK voting: ‘Un for My Baby (and Un More for the Road)”

“It’s called the Democratic People’s Republic of Korea. But any real notions of democracy end with the name.’

Actually, the 99.97% represent “Democracy” in the throe of Progressivism.

C’mon, be fair. He didn’t finish it with “for Democrats”.

Back in the USSR election officials came knocking on our door at the end of the election day, demanding that my totally apolitical older sister hurry up and vote.

“The Tirana Index (named after Albania’s capital) holds that repressiveness correlates with electoral success. The higher the score rolled up by the ruling party in elections, the more tyrannous the regime. At one end of the spectrum are places like Albania, the Soviet Union and Syria, where 99 percent of the vote is the norm.”

The only ballots NOT cast for Kim were spoiled: the voters’ hands were shaking so bad, the ballots were illegible.