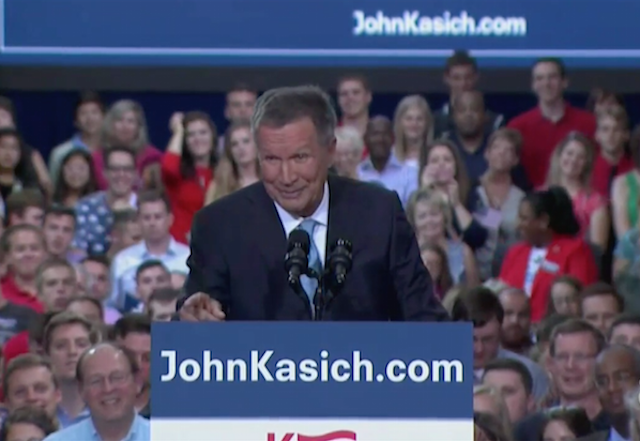 Today during a speech to a packed house at the (THE) Ohio State University, the former congressman and two-term governor became the 16th person to throw his name into the running for the Republican nomination for president.

You can watch the announcement here, via the New York Times (jump the video back to about 10 minutes in):

Mr. Kasich had been toying with running for months. By Tuesday morning, the faux mystery surrounding his candidacy was officially over even before his speech. The student union hall at Ohio State was festooned with “Kasich for America” banners, volunteers milled about in bright red “Kasich for Us” T-shirts and hundreds of eager supporters waited in the hot sun to get inside the hall.

I’ll let you leave your thoughts in the comments. It was a solid speech, but definitely not one that was meant to pander to the base, or convince ultra-conservatives more likely to ally with a Cruz or a Rubio to turn on their heel and join Team Kasich. Instead, he spoke like an Ohio republican who trends more moderate, but still manages to hit high points with more right-leaning voters.

Mr. Kasich, 63 years old, is counting on his mix of executive and Capitol Hill experience to catapult him to contender status. He’ll also tout his work on national security and budget issues during his tenure as a congressman from 1983 until 2001, as well as the economic turnaround in Ohio.

“He’s not scared to tell the base where they’re wrong,” said John Feehery, a Republican strategist who served as a leadership aide in Congress during Mr. Kasich’s tenure. “I don’t think the ideological base is in love with Kasich, but I think in many ways they admire him.”

Indeed, many components of Mr. Kasich’s record could appeal to GOP voters.

As chairman of the House Budget Committee in Congress, he balanced the federal budget. “It’s very hard to do,” Mr. Kasich asserts in a new video.

On his watch in Ohio, multibillion shortfalls have been replaced by a $2 billion surplus.

The former Lehman Brothers executive also “worked in the real world as a commentator on Fox [News],” his video notes.

While Mr. Kasich can claim budget bona fides, he is likely to face fire from fellow Republicans for a variety of views that have diverged from conservative orthodoxy.

“Diverge” is an understatement. His support for Obamacare’s medicaid expansion and common core programs has turned him into a pariah with some conservatives, and that’s something he’s going to have to answer for with primary voters. Still, that’s what primaries are for; what works for Ohio may not work for Republicans across the country, and I expect he may have a difficult time making his message resonate over the protestations of the base. 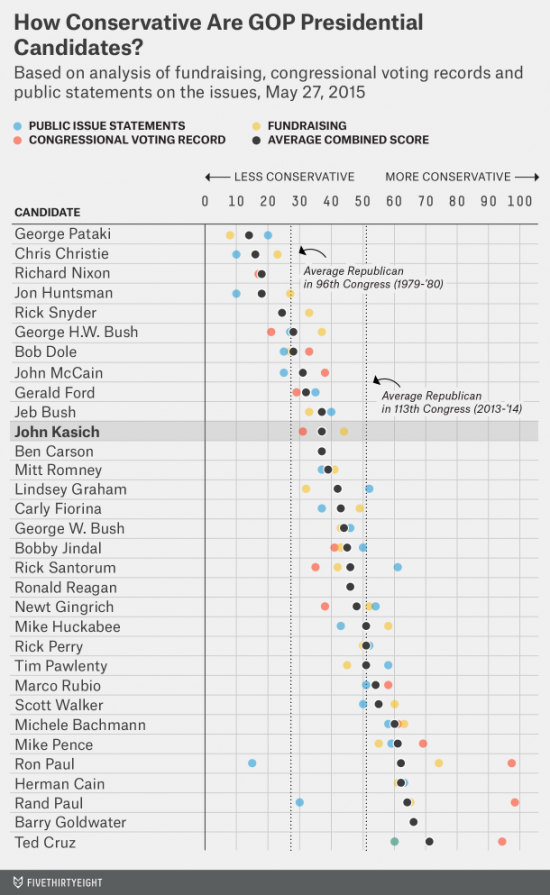 FT8’s article goes on to note that, although Kasich appears to represent a happy medium, the tone he takes when he defends his more moderate positions comes across as condescending, much like that of former presidential candidate John Huntsman, who failed to win any primaries:

Kasich’s problem is that he sounds a lot like Huntsman. That is, he defends moderate positions — often in a manner that comes off as condescending. Most prominently, he has embraced Medicaid expansion in Ohio. Once challenged on expansion, Kasich yelled, “I don’t know about you, lady, but when I get to the pearly gates, I’m going to have an answer for what I’ve done for the poor.” It isn’t just what Kasich said, but how he said it. As Politico detailed, this type of reaction is fairly typical for Kasich. He likes to yell and to tell people, “You don’t know what you’re talking about.”

But it’s not a good way to win over Republican voters.

This is where that emotional connection I keep talking about comes into play. Kasich will need to be careful with his voters, or risk becoming yet one more low-tier flash in the pan.

We’ll keep you updated on the state of his campaign.

Side note: I’ve spoken previously about Periscope, Twitter’s new livestreaming + livetweeting app. If you’ve never seen it in action, check out this stream by Ohio-based reporter Jeremy Pelzer. The quality could be better, but for me, Periscope is a “next big thing” tool for both candidates and activists who crave live coverage.

“He’s not scared to tell the base where they’re wrong,” said John Feehery, a Republican strategist who served as a leadership aide in Congress during Mr. Kasich’s tenure.

(If an emphatic “meh” is possible, put me down for one.)

That was about my response to the announcement. A decided “Meh.” Kasich is Walker-lite. He couldn’t get the union dismantling through the Ohio Legislature (he left certain large public unions alone IIRC). Kasich is not as battle-tested.

IIRC, he’s also a fan of CommieCore and he has sucked up to the Zerocare effort to destroy Medicaid by expanding it without funding the increase.

Ohio taxpayers are going to get a shock when the bill for it comes due.

Plus, just like Jeb Bush, he’s telling conservatives to f**k off right out of the gate.

I don’t get it either – or most of the late entries. Walker was always going to run, but Jindal should have seen the big field and punted, he’s young. Pataki must be looking for a Last Hurrah. And if that billionaire (Friess?) wants to back Santorum again, there’s plenty of ego left there, too.

I suspect Kasich just wants his name in the field for the future. Maybe he sees a 2020 run if we lose, or maybe he’s looking at a cabinet post or OMB.

Now that you’ve wasted a perfectly good post on Kasich running for a nomination he couldn’t get if his mother was warlord of the universe, you’re going to feel obligated to post about the other no-chancers.

Are we sure his mother ISN’T warlord of the universe? 🙂

The year of the Buckeye! He’s done some great things in Ohio but I’ll wait to see his stance on the big, no-compromise issues before I put him ahead of my current favorites.

Unless you’re a proponent, his stance on Obongocare and Common Core’s already told me that he is not the person for me, but feel free to support him.

On his watch in Ohio, multibillion shortfalls have been replaced by a $2 billion surplus.

How the hell does 538 rank Gov. Mike Huckabee as more Conservative than Newt Gingrich?????

I like Gov. Huckabee’s stance on repealing the tax code and 16th Amendment and replacing with the “FairTax” proposal, but several of Huckabee’s positions are downright RINO-ish.

BREAKING NEWS! Confirmed! The Democrat Party is paying people to enter the Republican Presidential Race for 2016

This is all rather fun. The party without principles does everything in it’s power to destroy itself, yet they still wonder why so many of us have left. Meanwhile, a clown speaks for the people.

The lesser of the evils is still evil, and I’m not sure how much longer I’ll continue playing the voting game.

Yawn. Another no chance candidate enters the race.