Rauner vs. the Unions

Late last month, Illinois Governor Bruce Rauner (R-eal Life Republican) made headlines after he allowed his government to go into a partial shutdown rather than succumb to Democrats’ demands for a tax-and-spend budget.

At the forefront of the assault against Rauner’s efforts to curb Illinois’ $6 billion dollar deficit (the largest in the nation) are the state’s infamous unions. AFSCME’s (the state, local, and municipal workers’ union) contract ran out with the State of Illinois on June 30, and officials are warning Rauner that if he refuses to deal, union members will go on strike. Back in May, Illinois’ Democrat-controlled legislature passed a bill that would bring in an arbitrator if either the State or the union declares an impasse in contract talks; Rauner, however, is expected to veto that bill, which means that a union strike could be in the cards.

For their part, Rauner’s administration seems to be preparing for much worse than a slowdown. According to a report by the State Journal-Register, staffers have been contacting retired state employees and floating the idea of short-term contract work in the event that the union decides to strike.

Reactions have been mixed:

David Scheina, 65, of rural Sangamon County said he got a call from an administrator at the Department of Children and Family Services about two weeks ago. He was not available to take the call, and the employee left a voice mail message.
“The message asked me to call her back if I was interested in going to work should the possibility occur that the employees go out on strike,” Scheina said.
Scheina said he did not return the call.
“I was somewhat appalled by it,” he said. “I feel it was wrong, an employee on state time trying to line up retirees to cross a potential picket line that I didn’t see being suggested. I thought it wasn’t bargaining in good faith.”
…
Another retired DCFS worker said she received a call from a DCFS employee near the end of June. The retiree, who asked not to be identified by name because she’s not made a decision, said the call covered the same topic. The DCFS employee asked about her willingness to come back on a 75-day temporary contract “in case the union does something.”
The retiree said she was not asked to make a commitment at the time of the call. She said it sounded like an initial call to compile a list of people to be contacted later in the event of a work action.

Representatives from the administration haven’t denied making the calls, saying that they’re working to ensure that essential state services won’t shut down if union members decide to walk.

Rauner isn’t alone in this battle–he’s fielded some support at the highest level of union-busting politics: 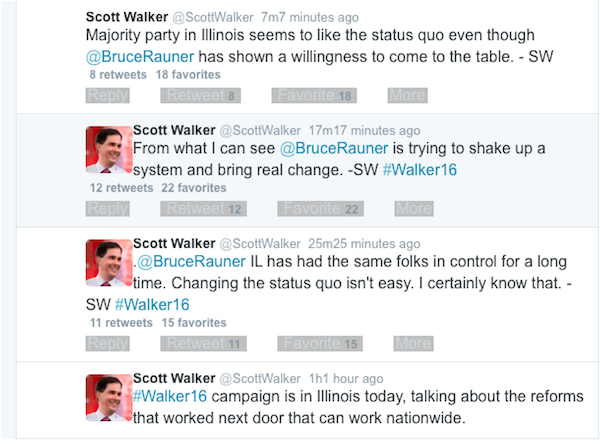 When it comes to taking on Democrats and the unions, Walker knows how much pressure can fall on a governor being pushed to take the easy way out. Everything coming out of Springfield tells me that Rauner isn’t ready to capitulate, but a little support from his high-profile Republican colleagues couldn’t hurt.

What if all the union thugs went on strike and everybody realized that life goes on without them?

Keep in mind that from the time Jim Thompson was sworn in as governor in January 1977 and George Ryan left office in January 2003, the state bureaucracy was one large swamp of Republican patronage employees. Thus there has to be a fairly good sized pool of retired state employees who are, at least nominally, Republicans. Some of them may be even more corrupt than the Democrats, but their loyalties are not with Mike Madigan and company.

What do you call all Illinois Democrats given a one-way ticket to North Korea? A good start…….

Let them (the unions) Eat Cake! In 1988 I left AT&T because of the Union and started my own phone company. Twenty eight years later my company is strong and surviving and my wife and I haven’t worked real hard in the last 15 years. Unions are for losers. The secret to success is to hire great people and pay them well and treat them with respect.

“I feel it was wrong, an employee on state time trying to line up retirees to cross a potential picket line”

So, then, by that reasoning it would also be wrong for a private company to look for workers in anticipation of an impending strike. Funny sense of morality there.

Or even better, by that reasoning, it would be wrong for union employees that are paid by the state to be doing union work on state time at all. let alone convincing union members to strike, etc.

Yet unions in Illinois routinely get union members funded as part of contracts solely for the purpose of doing union activities, not state work, on these sweetheart deals.

Yeah, no outrage then, was there.

This afternoon I saw the Chicago Sun Time article (link above) with the picture of a mother and her young son. I reply tweeted my thanks to Mike Madigan, THE power broker of the Illinois’s welfare state and union contracts, for his causing the “impasse”.

The picture’s caption stated, as you can read, that life is getting hard for Illinoisans while the government struggles to reconcile its budget: “… a growing number of people feeling the pinch of the state’s budget impasse as social service agencies don’t get promised payments, programs are reduced or eliminated and some agencies close their doors.”
No doubt the picture was meant to depict a sad reality, a reality created by Mike Madigan.

No amount of additional tax money can fix this mess. With new revenue Mike Madigan and the Democrats find new ways to pad pockets with cash.

It is time for Mike Madigan and his daughter Lisa to leave this state-tar and feathered first.

It is time for Illinoisans to no longer be held hostage by unions and union pensions and union contracts controlled and proffered by attorney Mike Madigan.

It is time to be rid of Dick “sack of” Durbin. God help us be rid of him.

I would hope that every Republican governor would stand with Governor Bruce Rauner and do so in a very vocal fashion. They can take their cue from Wisc. Gov. Scott Walker who clearly understands what it takes to clean house.

Republican Governors and Presidential candidates are not likely to be much help.

Rauner needs the citizens to deluge the Democrats in the legislature with demands for fiscal responsibility. Unless some Democrats see the light, no long-term reform will be possible.

Even though I have lived in Illinois all my life I could be very cynical, especially when Illinois feeds the federal prison system with many of its “for-the-people” politicians. Somehow, Rahm Emanuel and Mike Madigan and David “IRS-Lerner scandal invoker(?)” Axelrod have all avoided that scenario for now.

But, I am hoping that outsiders -“Republican Governors and Presidential candidates”- will incite a firestorm around Illinois Republicans and cause them to react.

I hope they will bring to light and denounce the corruption and cronyism of the state.

I hope, by their example writ large, that they show the way to fix its deplorable financial condition.

I hope things change for the better, soon. Many are leaving the Land of Lincoln for higher ground.

Rauner has the courage of a self-made man.

Good for Rauner. He should use whatever leverage he has, or he will be a lame duck for his whole term.

But the odds are stacked against him. Republicans were always competitive in the Wisconsin legislature and when Walker came into office controlled one house and wrangled a tie in the other. Eventually, they were in full control Not so in Illinois, where Chicago’s influence infects the entire state.

For those union members who think they can shut down essential services provided by the state by striking, I suggest they have a talk with members of the Previous Association of Air Traffic Controllers (formerly PATCO).