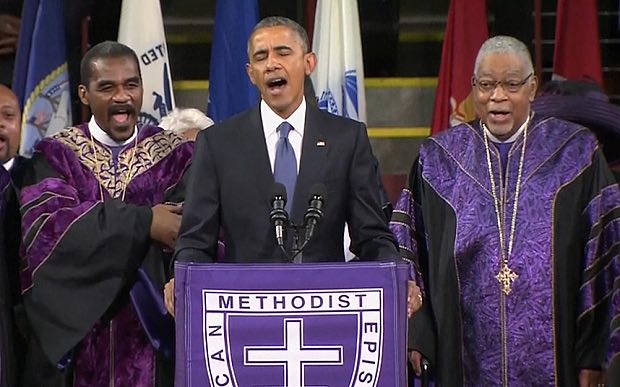 The term “liberal media” is one that kind of makes people raise an eyebrow as it is often seen as too generic an attack on the media. That said, it is hard to argue that some bias in the media does not exist that tilts towards Democrats. Look at almost any survey and you’ll find the overwhelming majority of journalists vote Democrat and some of that bias is going to work its way into their reporting whether they want to admit it or not.

Bias can come in two forms: How something is covered and whether or not it is covered at all. Then there are times when the press just goes off the reservation and their fawning coverage of President Obama is just blatant.

Following the horrific shooting of nine people by Dylann Roof, President Obama was invited to Emanuel African Methodist Episcopal Church, to delivery the eulogy for Rev. Clementa Pinckney, one of the nine victims and also one of the pastors of the church.

The President, never one to miss a chance to make something political, spoke of gun control but also delivered a stirring tribute to Pinckney, who not only served people at the church, but also as a state legislator.

It was at the end of the eulogy that President Obama did something that some described as “one of the most powerful moments in Presidential history.” He launched into the song, ‘Amazing Grace’, one of the most beautiful hymns ever written. Twitter went haywire with a ton of tweets punctuated with “Wow” at the wonder of the moment.

Later that day and the next morning, the media was gaga over the the powerful, “spontaneous” moment where President Obama launched into song. From CNN:

Obama’s words on grace especially — a core biblical concept — appeared to move him spontaneously to song. While this is very common among preachers in the black church tradition, it is less common for a President to break out in song mid-sermon.

Clarence Page was beside himself:

Obama departed from his famously eloquent speaking style to lead the minister and crowd in a spontaneous rendition of Amazing Grace. The move came at precisely the right time to lift spirits after the tragedy.

There’s only one problem: There was nothing spontaneous about it. President Obama planned on doing it the entire time. He even discussed it with Michelle and Valerie Jarrett:

President Obama’s decision to sing “Amazing Grace” at the end of his eulogy for the Rev. Clementa Pinckney, a black pastor who was killed with eight others during Bible study in a Charleston, S.C., church last month, became one of the more memorable moments of his second term. But the idea raised at least some eyebrows when he first broached it with his closest confidants.

Mr. Obama was on the Marine One helicopter leaving the White House en route to Andrews Air Force Base for his flight to South Carolina when he mentioned the thought to Michelle Obama and Valerie Jarrett, their close friend and a White House senior adviser.

“When I get to the second part of referring to ‘Amazing Grace,’ I think I might sing,” he told them, by Ms. Jarrett’s account.

Mrs. Obama was a little more pointed. “Why on earth would that fit in?” she asked.

He tried to explain. “I don’t know whether I’m going to do it,” he said, according to Ms. Jarrett, “but I just wanted to warn you two that I might sing.” He added, “We’ll see how it feels at the time.”

Why wasn’t the press even skeptical of this? Didn’t they stop to think even for a moment that this might have been something the President was thinking all along? And since when is it the media’s role to lend emotion to what are factual events. Look this first paragraph from an AP story about it:

President Barack Obama used his eulogy for a slain pastor to deliver an unvarnished lecture on America’s racial history Friday, and then boldly sang “Amazing Grace,” a spiritual meant to summon hope in the darkest of times.

It reads more like something the Presidents personal biographer would write.

If the media were just a bit more skeptical they would have done some digging and found there was nothing spontaneous about what happened. Instead they were gullible, concluding it was completely unplanned because it fit the narrative of a “powerful” moment.

I think it was a racist gesture giving lip service to the old adage “they sho’ can sing n’ dance.”

Obama had to read the lyrics off the Teleprompter even!

Just like Jimma Caaaata used to carry an empty garment bag onto Air Force One to show what a man of the peeples he was.

They’re all just fakes and liars.

Amazing Grace is NOT a spiritual. It was written by a WHITE Protestant clergyman in 1779.
Good Lord the media cares nothing for fact, just a way to make that idiot BO look good.

IF Barracula really wanted to impress, he’da played it on the pipes…

“Amazing Grace” by Eric Metaxes is a great read.

I’m not sure we can knock him for this. In his defense, being God, Obama can do nothing spontaneous, since God knows the future. It’s a heavy burden he shoulders.

In eighteen months Obama will be coming out with his greatest hip-hop hits.

This CD will include “Basketball Jones”, “Bush Done Did It”; “I Am I Cried”; “I’m No Dictator”; “Amazing Me”; “SCOTUS Has My Back” and “Fiat-delphia Freedom”.

Hey, will it include his hits of “If I Had a Son” and “Big Feminists Do Cry?”

Once knew a three-legged hooker from Charleston named Amazing Grace.

I heard of her. She was the only one to ever beat Fred Astaire in dance competition.

She was dangerous to dance with and spent a fortune on shoes and garters, but I still gave her a leg up.

I heard that was just Obama made up in his trans-jenner drag!

Okay, Henry, that’s it, I’m sick of rinsing off my keyboard and want to where to send the bill for a replacement1

My work here is finished.

Be advised that you CAN forward bills, but they will only be paid in the order they have been received and as funds become available.

There are some very substantial invoices from a “Grace”, along with a few from the representative of a small herd of goats in some hollow somewhere…

You will be assigned a number…

Well, Henry, if you “knew” her Biblically I hope that you both signed consent forms in triplicate and sent them off to your legal guy Rags.

They are being processed in the autoclave…

Maybe he can cut an album if the Obamas wind up dead broke like the Clintons when they leave office.

Sales would be as flat as his caterwauling was.

From the “on the other hand” department……..

Singing Amazing Grace is the longest verbalization Obama has ever given without lying.

… and/or reading from a teleprompter.

Oh he was still lying and still using the teleprompter. It was just a tiny one buried up in him….

I’d like him to sing “In-A-Gadda-Da-Vida” next time. Does he even take requests?

I detect no bias here.

I give Obama zero points for his mea culpa performance.

…and no one mentions what a godawful wounded moose tuneless performance it was.

Condi shows how it should be done.