Ask her again when she’s president. 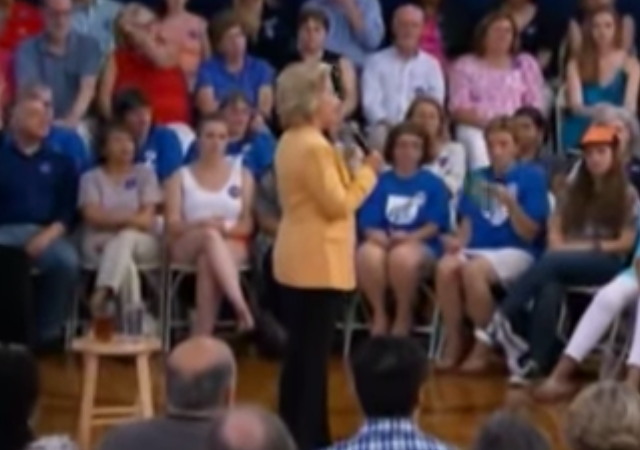 As Ed Morrissey comments at Hot Air, “Profiles in Courage this ain’t.”

At a campaign event in New Hampshire yesterday, an attendee asked Hillary if she would approve the Keystone XL Pipeline. Her answer, if you can call it one, was that she would answer the question if and when she becomes president.

“If it’s undecided when I become president, I will answer your question,” Clinton said. “This is President Obama’s decision. I’m not going to second-guess him.”

Clinton went on to note that she was in a position unique among the 2016 field due to her time as secretary of state. “I’m in a different position than any other candidate,” Clinton said. “I was there. I put this process together. I oversaw it for four years.” (Because the pipeline would begin in Canada, its approval — or not — is in the hands of the State Department.)

Bernie Sanders, seeing an easy opportunity to hit Clinton on climate change, pounced on this and released a statement. Here it is, via Politics USA:

We have to address the planetary crisis of climate change and there is no question that we must move aggressively toward energy efficiency and the development of sustainable energy sources such as wind, solar, geothermal and biomass. That is why I have introduced legislation that would create 10 million solar rooftops on homes and businesses in the United States. So I agree with Secretary Clinton about the need for substantial investment in sustainable energy.

But that is not enough. We must make significant reductions in carbon emissions and break our dependency on fossil fuels. That is why I have helped lead the fight in the Senate against the Keystone pipeline which would transport some of the dirtiest fossil fuel in the world.

It is hard for me to understand how one can be concerned about climate change but not vigorously oppose the Keystone pipeline.

It boggles the mind how liberals have held Hillary as the greatest candidate ever even though she won’t talk to people, that she failed as Sec. State (only to be out done [out failed?] by Kerry), that she blatantly broke this country’s secrecy laws, that she will not take a position on most everything, and so forth. Hillary’s failings are legion while her primary and sole accomplishment is simply that she is a woman. This should be a clear indication of how broken we are as a country. Where else could a person so inept. so terribly unqualified, so dishonest, and so forth, be considered not only to be a candidate for the presidency, but the prime candidate (a virtual shoo-in) for the Democrat nomination? If this is the best we can do to find a qualified candidate, then we are all doomed.

I disagree that HRC is a shoo-in. I agree with the balance of your comments. My prediction is that by the beginning of 2016 HRC will have suffered a spectacular flameout in the polls and the Dems will rally around a replacement. The only way the Dems can retain the White House is a massive voter fraud attack that we saw in the last presidential election. If the OPM cyber breech is an indication of a very sophisticated computer attack, imagine how easily our voting machines can be invaded and manipulated during the election. I don’t believe that our mini van and helicopter Moms are so naive as to cast their votes to HRC solely on the basis of gender.

Turns out her stealth strategy was pretty smart. The more people see and hear of Hillary, the less they like her.

“I was there. I put this process together. I oversaw it for four years.”

There you have it. Her Cankleness just admitted she was ‘large and in charge’ on a project that would benefit the entire country but won’t fight for it. How many jobs has she denied to skilled and willing workers because she won’t fight for Keystone? How much money will Americans lose to her cowardice and avarice?

Hillary – fighting for the little people except when she won’t

Well at least she tried to be [sarc] honest [/sarc].

She prefers not to talk to us, to avoid telling us more lies.

C’mon guys and gals !
Cut her some slack for her [sarc] honesty [/sarc].

“We have to pass this bill, to find out what’s in it.”

We have to elect this woman to find out what she’s thinking?

“We must make significant reductions in carbon emissions and break our dependency on fossil fuels.”
—Bernie Sanders

Why? The EPA head thug and every other slightly candid source has said that nothing we do will really make the slightest difference.

There is nothing that will replace fossil fuels as motor fuel even on the horizon, and, again, there’s no real benefit to the “environment” that would come from more moonpony engineering like we’ve seen from Barracula.

It’s a(nother) tragic legacy of this regime that the Keystone project hasn’t already been completed and been operational. American jobs were lost, and are lost. All in the name of utter irrationality.

The Canadian tar sands are one of the world’s largest oil spills. It’s almost an environmental disaster. And it’s completely natural. The companies processing that oil are cleaning up this disaster. So what if they are making a profit? It’s still a remediation of an environmental catastrophe. It doesn’t matter if it’s the dirtiest oil around. Once it is refined it becomes clean fuel. And when burned it produces energy and clean, invisible, orderless, tasteless plant food. The Keystone pipeline is really a green project.

“You should elect me president based on my superior positions on the
issues . . .

. . . but I won’t tell you what my positions are until you elect me president.”

Of course she will not state her position today.

She cannot know her position until she knows who she owes. And she cannot know who she owes until she’s elected and has the demographics of her votes. If union votes outnumber environmentalist votes, then Keystone is a “go”; otherwise, it’s a “no”.

That sounds an awful lot like “We have to pass the Bill to see what’s in the Bill.” That didn’t go so well, did it?

She’s lying and willing to lie again just to get what she desires, without regard to the consequences beyond her own little group.

She should have been charged with so many crimes by now.